Procession reenacts Biblical journey searching for shelter for the birth of Jesus. 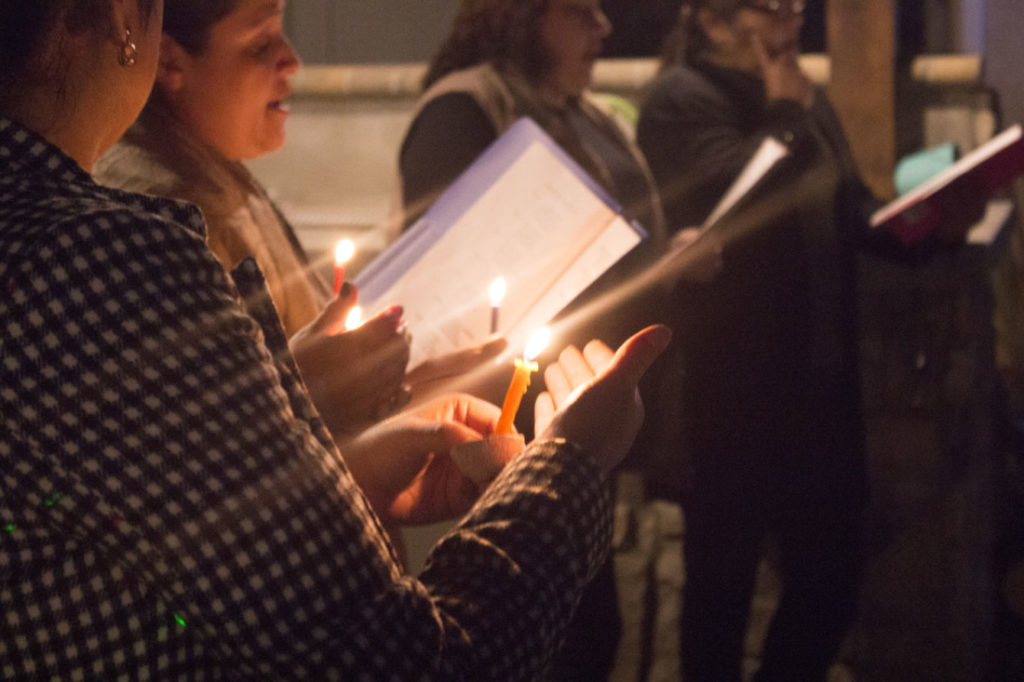 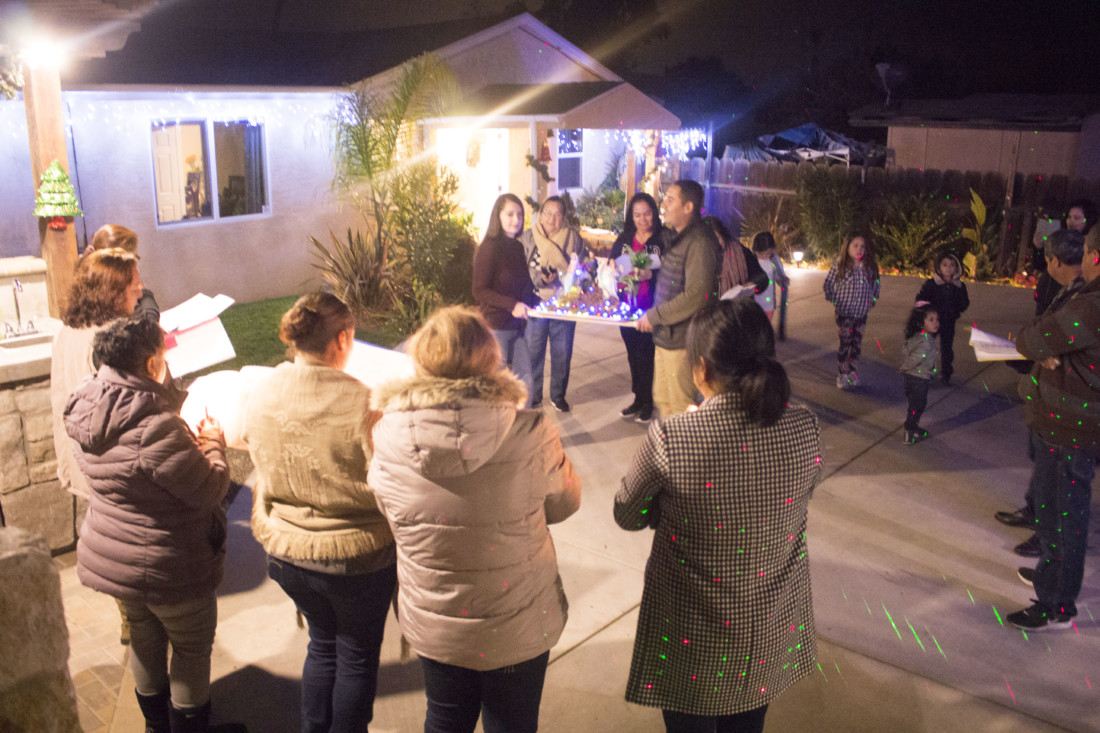 At their second stop, the group representing Mary and Joseph are again denied a place to stay. Photo by Noe Magaña. 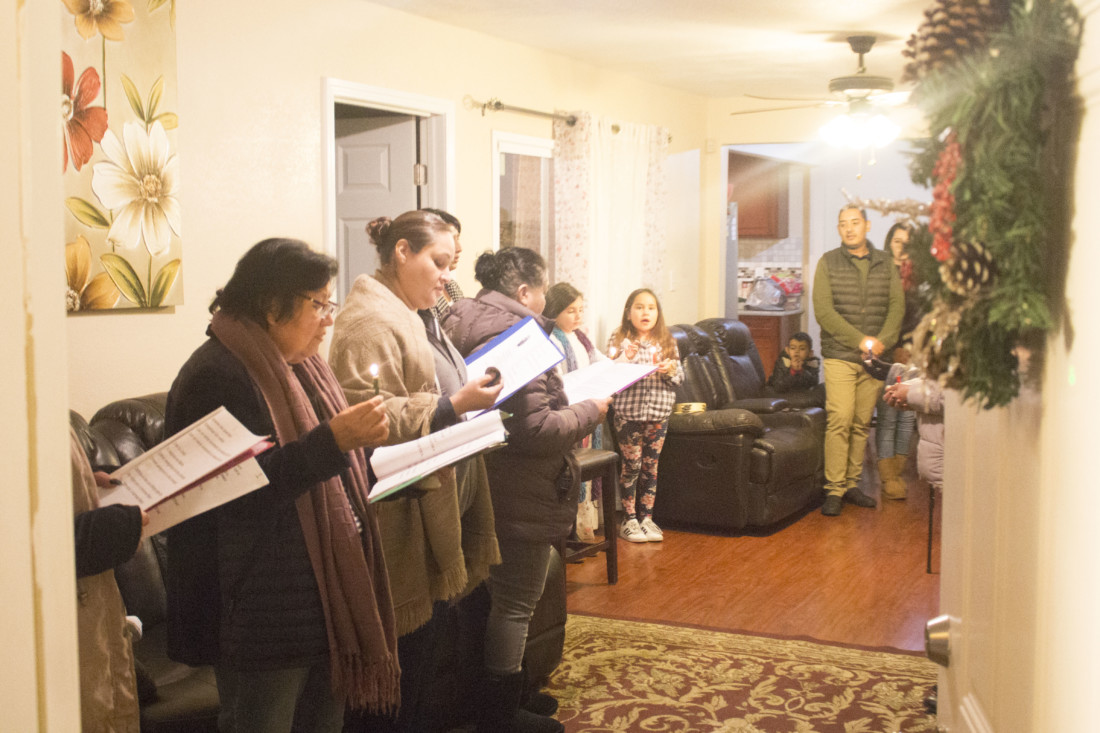 Once given a place to stay, the group representing Joseph and Mary enter the house and sing the last hymns. Photo by Noe Magaña.
×

Christmas carols, prayers and food are all part of the traditional posadas held around Hollister each holiday season. Posadas are celebrated in Latin America and reenact the Biblical journey of Joseph and Mary traveling from Nazareth to Bethlehem in search of shelter for the birth of Jesus. The celebration usually lasts from Dec. 16 to Dec. 24.

The Raya family hosted the posadas on Dec. 20, where over a dozen people participated in the procession. Through hymns, participants request a place to stay the night. After being denied twice, they are accepted into the third home. Food and drinks are given to the participants; kids receive traditional aguinaldos, or Christmas bags, containing candy, crackers, and fruit.

This is the third year the Raya family has hosted the posadas. Jaime Raya said it was a beautiful, important tradition he wanted to pass down to his children. Gerardo Raya, Jaime’s son, said the procession brings the community together.

Organizer Maria Lezama said while posadas are traditionally nine-day events, she does not hold one on the last day (Dec. 24) because people tend to stay home with family that night.

Lezama organized her first procession in 2002. A year later, she took on organizing the novena de la Virgen de Guadalupe, which sees local families host and honor a four-foot Virgin Mary statue between Oct. 28 and Dec. 12.

Since 2004, Cecilia Ojeda has hosted the Virgin Mary on Dec. 12, following in her mother’s footsteps. She said it’s a special day for her family, despite stresses that come with preparing the procession.

“Mi mama desde que yo me acuerdo hace eso,” Ojeda said. “Somos muy devotas de la Virgen.” (Since I can remember my mom did this. We are very devoted to the Virgin.)

Lezama said each family honors the Virgin Mary in their own way. Some families serenade her with a mariachi, some through folk dancing, and others who dance for her all night.

While Lezama brought the statue of the Virgin Mary from Mexico 19 years ago, she doesn’t consider it to be hers.

“Es de las personas que la reciben. No es mia,” Lezama said. (She belongs to the people that host her. She is not mine.)

Because of the number of families who volunteer to host the Virgin Mary, Lezama now starts the procession earlier on Oct. 1.

Attendance has increased over the years, varying between a dozen to 100 individuals on any given night. In some cases, residents invite out-of-town families to the posadas. People from as far away as Los Angeles have participated in the procession.

Lezama, who has organized the posadas for 17 years, said she is not aware of other families who hold their own celebration in Hollister. Though she welcomes people to join the posadas, she also hopes neighborhoods will organize their own.

“A mi me gustaria mucho que se juntaran colonias. Que se juntaran entre nueve familias [he] hicieran sus posadas entre ellos mismos,” Lezama said. (I would really like for neighborhoods to get together. That nine families did their own posadas between them.)