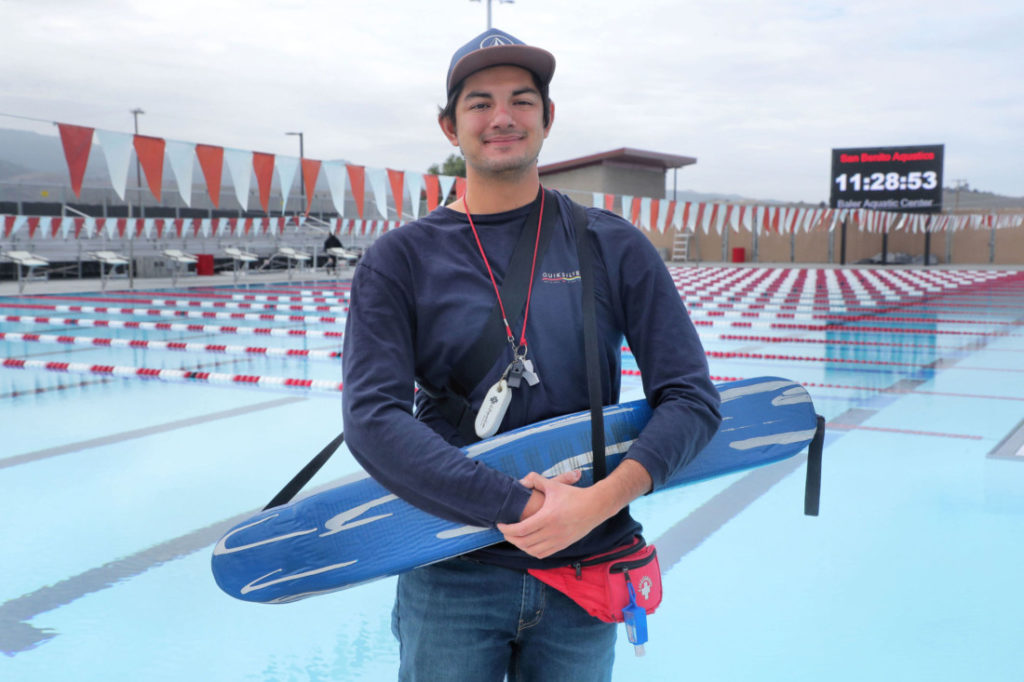 “I had to jump in the water once to save a kid who tried to swim with his brother and sister,” said lifeguard Dawson Garcia. “He was three or four years old and decided he could go in the 12-foot section. He grabbed on to his brother and sister and started bringing them both under the water. When I went to grab him and his siblings, his brother pushed off me and he knocked into his sister, who started freaking out. I had to tell him to stop because he would drown his sister.”

Garcia, 21, is a former student at San Benito High School who spent time on the swim and water polo teams. He became certified as a lifeguard at 16 years old and now works for San Benito Aquatics at the school’s swimming pool.

“I was always big on being in the water,” he said. “Then I found out you could get paid watching people in the pool and then go swimming after I got off work. So I thought, ‘Hey, why don’t I lifeguard for a while?’”

Maddie Corrigan is 15 years old and has been a certified lifeguard at the pool for eight months.

“My brother and sister are both lifeguards,” she said, “and that made me want to do it. I have not had to do any first aid or saves here yet, but I am trained for it. And in an emergency, you can rely on your coworkers for their help as well. “

Starting as a lifeguard as a teenager is more the rule than the exception at San Benito Aquatics. While the school’s swim program has produced a healthy crop of lifeguards to employ, they are not able to work during school hours, which creates a unique problem.

“We have a great need for lifeguards,” said San Benito Aquatics Program and Facility Manager Julie Corrigan. “Ninety percent of our lifeguards right now are high school students. We would love to see some adult lifeguards because we can’t open to the public without them. So we need to have more lifeguards to give us more opportunities to be open.”

The need is less critical at the moment, due to COVID-19 restrictions. Public access to the pool is limited to lap swimmers rather than the more casual family swim time, which means fewer lifeguards are needed on a day-to-day basis.

Lifeguard certification at the pool happens several times a year and is led by Gary Anderson of West Coast Lifeguard. Anderson is an experienced ocean lifeguard, an international swim coach, and a finalist at the Seoul and Barcelona Olympics.

To be able to take the class, applicants need to have a swimming background, such as high school swimming, club swimming, or water polo.

Anderson’s classes are two sessions of ten hours each on successive weekends. There are also seven hours of online instruction. Those who complete the course receive Red Cross certification.

“Students learn all the rescues and first aid,” Anderson said. “They learn how to perform CPR on a child and an adult. We do timed, simulated events where we make sure they can react to things and identify possible issues.”

Being a lifeguard requires concentration beyond just watching for emergencies in the pool. Part of the job is sizing up the swimming abilities of everyone in the pool and anticipating problems before they happen. Under ideal conditions, Garcia is able to keep track of 25 to 30 people in the pool at the same time, observing their swimming skills as he goes.

“There is a lot of paying attention and watching the finer details of people swimming,” Garcia said. “Watching for any abnormalities, such as ‘this guy is swimming but he is going slower and slower’ or ‘this kid is swimming in the deep end and I know he can’t swim very well.’ I try to pick out the strong swimmers versus the weak swimmers early so I will have an idea of who may need my assistance later on.”

According to Anderson, lifeguards also need to work to stay in shape for the job and their own safety.

“After you have been hired, you need to stay physically fit,” Anderson said. “You have to be able to react quickly and it can be quite strenuous. You could be rescuing someone who weighs 50 pounds or 250. If you only weigh 110 pounds yourself, you better have the strength to do it. They also need to be mature—they are responsible for people’s lives out there.”

Lifeguards learn to be careful for their own safety, as panicking swimmers might try to use them as floatation devices, pushing them under the water.

“First and foremost you have to look after yourself,” Garcia said. “You can’t save someone if you’re drowning. It is a common thing, when people start lifeguarding and they get their first save, they think they can do anything. We instruct people to get no more than two people at a time, only as many as you are able to handle. If you overestimate yourself you can put yourself in danger and also might not finish the job of rescuing someone.”

Anderson has scheduled an American Red Cross Certification class in lifeguarding at the pool, to be held March 6-7. Prospective students may sign up on the West Coast Lifeguard website.

“It’s a great job,” Maddie said. “You are trained, so if you have to save someone, everything will kick in. It makes me feel pretty good that I am capable of doing something like that, keeping someone from being injured and maybe saving a life.” 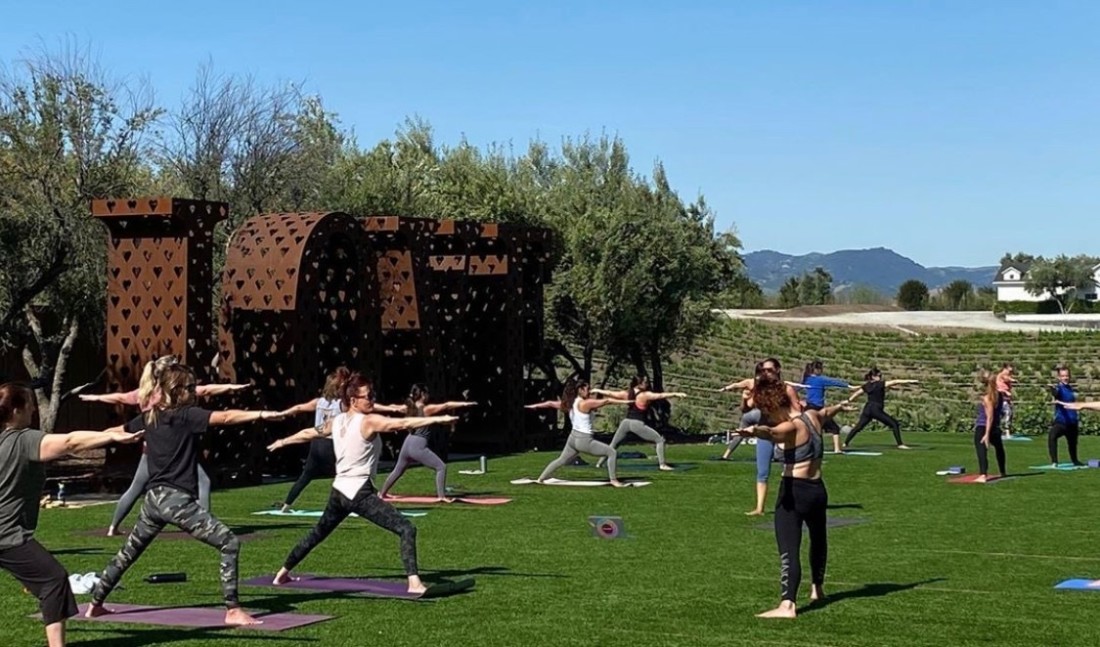 Oasis moving to a new location. 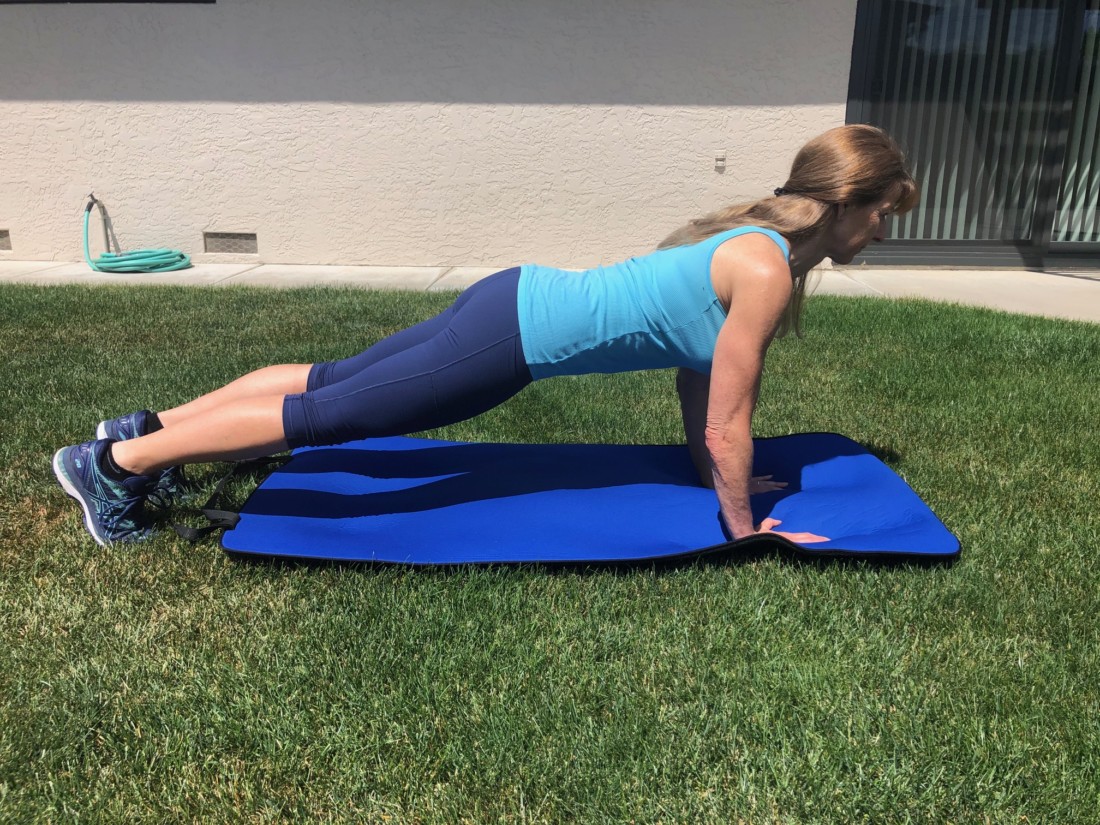 Tips for exercising at home

How to adopt, or maintain, fitness goals while sheltering in place. 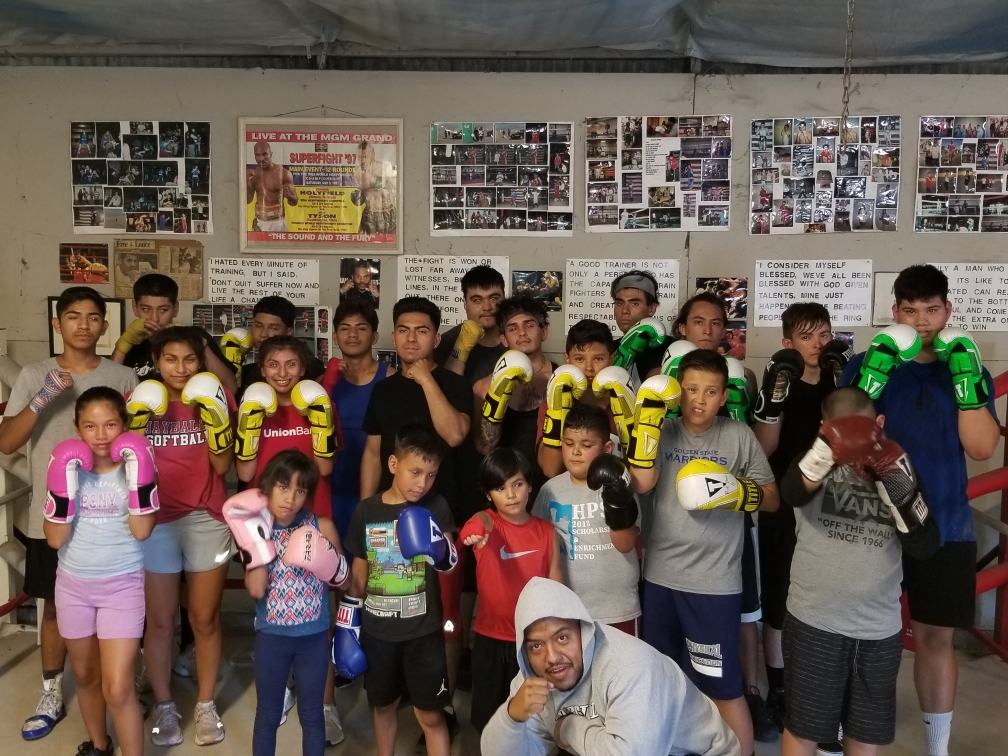