The San Benito County Fair theme for 2017 was “Lettuce Celebrate”, and hundreds did just that in the fair grandstand. Events delivered the guts, glory and drama of motocross, quad and tractor pull action for an audience of hundreds. 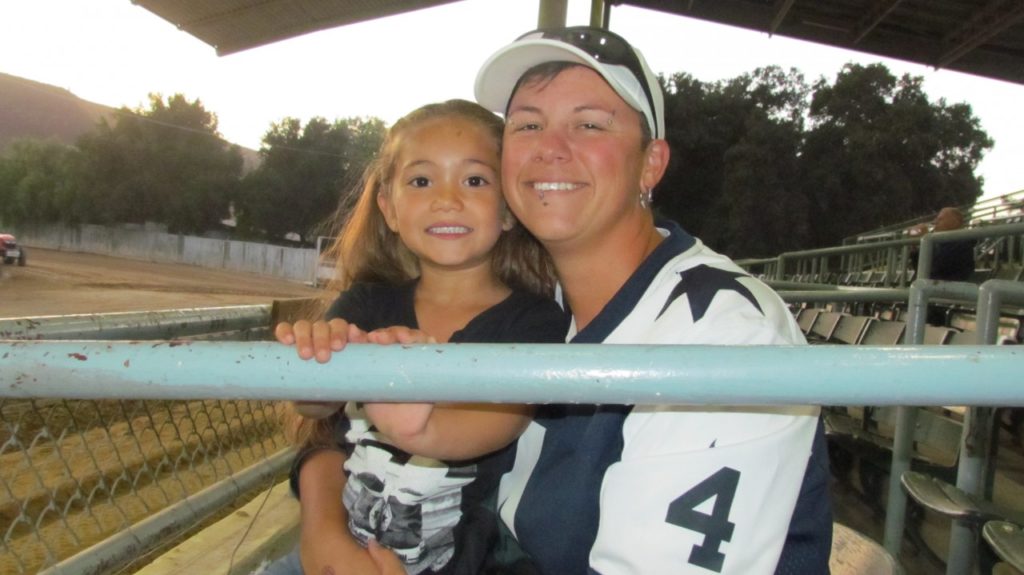 Aviana and Leanne Seibert waits for the action at the grandstand The San Benito County Fair motorized events delivered the guts, glory, and drama of a battlefield. A woman driving a tractor prepped for a Zombie Apocalypse warmed up the track and the crowd by zooming back and forth driving elevated in the oversized wheels.

“It’s noisy”, said four-year-old Aviana Seiter who was enjoying the night with her mother, Leanne Seiter. Aviana’s brown eyes got big every time the monster truck went by. The fact that a woman drove it didn’t faze Aviana. Because her mother, Leanne, had a job that had traditionally been a man’s role. She works for PG&E as a gas line inspector and is new to Hollister. “I like them because they are so big,” Aviana said as the monster stormed on the track again, and again, stirring up the dust on the track.

As the tractors, diesel trucks, quads and motor crosses got ready the air became dense with excitement, fumes, and dust. Bright lights were lit up, and a fire truck came on the scene, in case of an accident.

Then the games began. The announcer got the audience riled up as he announced the events.

“I want to hear you shout.” The audience hollered. “I can’t hear you,” the announcer goaded the crowd, and then they bellowed back at him. It was time for the motocross daredevils to wow the crowd.

Each man whizzed down a track, jumped over the two-sided ramp and landed with precision below. They took their jumps to greater heights and daring with more air and flips for the crowd. It was done with such speed that the spectator dared not look away. “Let’s hear some noise.” The crowd screamed in appreciation.

Jimmy Fitzpatrick of the Metal Mulisha group, caused gasps from his high-flying antics, and it’s no wonder. He has taken on freestyle demos all around the world making a name for himself and some of the biggest KOD (kiss of death) flips in the action sports industry.

He didn’t disappoint the San Benito Fair crowd, but the announcer taunted: “Do you want more?”

“Yes,” the audience screamed back.

When Fitzpatrick and his daredevil partner finished their death-defying flips and jumps, they each took a turn around the track waving to the audience, then they zoomed out of the arena in glory.

Next up, the drama was delivered with the Quad Wars. Two teams, Hollister and Vegas competed by racing around posts that divided a curvy track, for several rounds until they would make it back to the finish line. Before the race got started, however, each man demonstrated his talents as he stormed around in circles stirring up the dust, popping wheelies, and standing up on his moving quad.

After that, a water truck sprayed the ground and the “war” began.

Two from each team, Hollister, and Vegas circled around the posts, popped wheelies, and, even got stuck a couple of times. During the race, Hollister was first in the lead, but when Hollister took the corner too wide, Vegas slipped in the opening and, then it was neck and neck until Vegas stormed ahead and won.

“You can boo Vegas if you want.” The crowd booed.

Leanne said Aviana was bummed that Hollister didn’t win, but the war wasn’t over yet.

The “dash for cash” competition promised another chance for Hollister to win $1,000. But, alas, that win also went to the Vegas team, and the crowd booed again. “Make a little more noise. We can’t let Vegas walk away with any more cash.” Predictably, the audience went wild with noise. And the last chance for Hollister to hold its own and win the money back happened with another dash for cash. All eight quad drivers participated, this time the ante was raised to $3,000. But, before they began, a fight appeared to break out on the track with all eight guys getting into the action until they were separated, regrouped and began again. A boy in the audience whispered, “so fake”, and his buddies chuckled in agreement.

Hollister won the $3,000 on the last round and that marked the end of the quad wars and redemption for the home crowd. The quad racers made one more dash around the track to wave to their appreciative audience.

This day was full of motor power, modern down-home fair excitement with a mechanical twist. San Benito County Fair has been operating for almost one hundred years.The type of vehicles gets more sophisticated but it's still a family day to relax and take in the entertainment.

Meanwhile, outside the grandstands, adults and children were enjoying the carnival rides, gulping down fair food, petting animals, and meeting up with old friends, just like county fairs all over America.