Jackson Curro knows what it will take to one day become a NASA astronaut, and it starts now 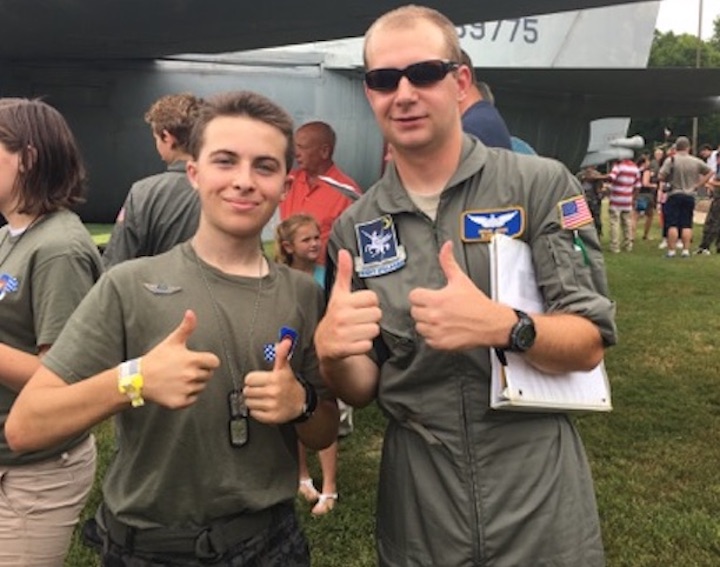 Jackson with one of his instructors at space camp. Jackson Curro, at age 15, already knows what he wants to do with his life — he wants to be a space explorer.

Curro first thought about becoming an astronaut when he was just 2 years old, says his mother, Angela Curro. Her son saw the movie, "Toy Story," and was obsessed with Buzz Lightyear.

Curro’s fascination with Buzz Lightyear has turned into a bona fide career goal for the young man, who will be a freshman at Monte Vista Christian School in Watsonville in September. While Curro says that his school does have great technology resources, he also feeds his space passion with other outlets.

Curro has spent the past two summers going to camps hosted by the U.S. Space and Rocket Center in Huntsville, Alabama. The camp hosts hundreds of students aged 9 to 18 every summer. It also offers adult programs.

In 2016, Curro attended the Aviation Challenge camp, where, according to the website, “trainees are immersed in the fascinating realms of flight while learning about the basics of the military lifestyle.”

This past June, Curro returned to Alabama for Advanced Space Academy, where participants explore “college and career preparation” while experiencing “a variety of astronaut training exercises, engineering challenges, and team building activities.”

The camp culminates in simulated space missions. Curro participated in a three-hour Mars simulation that required his team to simulate various components of a NASA Mars mission, including mission control, shuttle orbiters and Mars landers. Curro was part of a team stationed on Phobos, Mars’ closest moon.

Curro calls the entire experience “exhilarating.” He acted as one of the engineers on the mission and had to wear a space suit and ice vests to keep him cool in the hot, heavy gear. He was then hoisted up in a harness, to help simulate zero gravity.

While the Mars simulation was fun, Curro said he isn’t very interested in actually traveling to Mars. He says it’s “way too far” of a trip for his comfort, but he would like to “go to the moon, build a colony on it,” and “be there for awhile.” Curro thinks the moon could be used as a staging ground for other space travelers on their way to further parts of the solar system. The moon, he says, could also become an important mining center for Helium 3, an element some scientists think could be used to produce clean energy.

The Mars simulation at Advanced Space Camp also introduced a surprise emergency medical failure, which the team addressed as if it were happening in real time. Almost all camp activities require a large amount of teamwork from the group of about 15 students. Curro knows that teamwork is a major factor in any NASA mission, and also understands the incredible toll being an astronaut can take on the body and mind.

“You can get scared of many things…there’s the vacuum,” Curro acknowledges, “but you’d have to get used to that. I get scared of things." Then Curro adds with a laugh, “I inherited my fear of falling from my mother!”

Angela is quick to add that her son is “much better than [she is]… because he tries to conquer his fears.”

Of course, these are just simulations. But Curro has tangible goals in mind. First, he says that he “wants to be a pilot… and it looks like I will have to be an engineer.”

To become a pilot and then an astronaut, Curro knows that he also needs to stay physically fit and do well in his high school classes. Ultimately, Curro wants to attend the Air Force Academy, a military college that requires an invitation to apply, then a rigorous admission process before candidates are nominated for attendance. “It’s a very challenging process,” says Curro’s mother.

Curro also adds that he is “currently doing online classes for civilian piloting,” which should improve his chances. His school is also aware of his long-term goals.

Curro also needs to spend the next few years of study deciding what area of science he wants to research. Ideally, that subject would be something useful for space travel. Subjects can be wide-ranging, from geology to engineering. The Curro family knows NASA volunteers who are agriculture specialists, studying how to grow plants in space.

“You have to come with some skill set that will benefit the space travel program,” says Angela, “and so that’s what Jackson has to focus in on.”

As a starting point, Jackson is interested in robotics. “It might be a good idea, because they are most likely going to send rovers and other drones that aren’t manned to build up a base on the moon.”

No matter what happens in his future, Curro’s mother knows that her son will be successful and happy.

“I couldn’t be prouder of him, and no matter what he becomes, no matter where life takes him, I know he is going to do the best he possibly can,” Angela says.