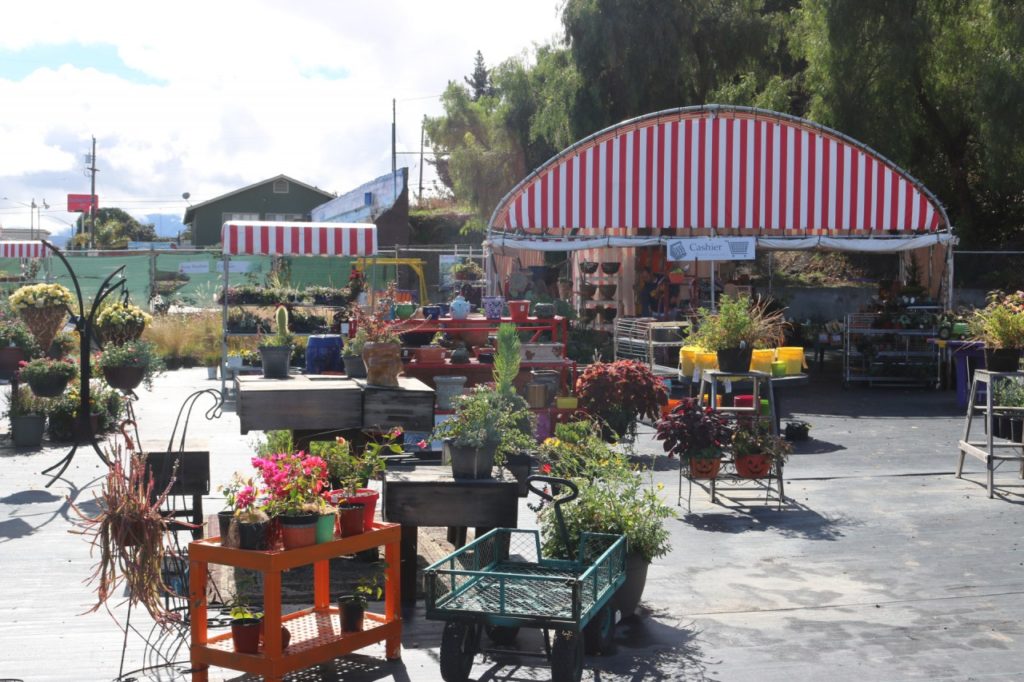 The GardenMart will close over the next few weeks. Photos by John Chadwell. After no fewer than four appearances at Hollister City Council and San Benito County Board of Supervisors meetings to detail her plight in dealing with the homeless around her GardenMart business, Marci Huston is throwing in the towel. Feeling that neither governing body was willing or able to help her, she and her family will be moving the plants, pots and other garden materials to their five-acre farm and business, M&M Plants Sales, Inc., on Spring Grove Road, east of Hollister.

When BenitoLink stopped at her business on San Benito Street, Huston was not there, but her son, Nick, agreed to speak on her behalf. As it turned out, the apple didn’t fall far from the tree, as he expressed many of the same sentiments that his mother has at the council and board meetings.

Nick Huston described his mother and himself as co-partners in the business, but he said she is the owner. He said they have been in the retail business for five years and at the San Benito Street location for two years. Before that, they ran the business off and on near K-Mart on Tres Pinos Road. He said that at their current location at the foot of Park Hill, they have had to continually deal with the homeless taking drugs, defecating, leaving trash, shouting, playing loud music, and harassing customers.

“They’d tell our customers that our plants aren’t good enough and they shouldn’t buy them,” Huston said. “This is not something we should have to put up with, and when the City of Hollister doesn’t help us out, it kind of makes us just want to go away.”

Despite his mother’s repeated attempts to get help, Huston claimed, no one with the city or county, nor other businesses that claim to have issues with the homeless, are willing to stand alongside her in support.

“She seems to be the only one fighting to get something done,” he said. “When you’re the only person trying to get something done, most people are just going to push you off to the side and say, ‘it’s not that big a deal because there’s only one person complaining.’ Now, if we could have gotten all these people who are saying they’re having issues with the homeless to say, ‘let’s have a whole group of us go to the Board of Supervisors to say they all have this issue. Why aren’t we doing something?’”

Huston said he thought it was “disgusting” how local politicians have treated his mother.

“When you go in front of the Board of Supervisors and you tell a story of a lady coming and taking a crap on your property, you think that might turn some heads and make them want to do something about it, but they didn’t even bat an eye,” he said. “They see them (homeless) all over town and all they do is move them from one spot to another. They’ll hang out there awhile until somebody complains, and then they’ll move them again.”

Huston said he doesn’t pretend to have a solution for the homeless problem, but believes they “love their lifestyles and they don’t want to change it.”

“They (city and county officials) say they’re building a shelter, but 95 percent of these people don’t want them,” Huston said. “The city says it has 650 homeless people in Hollister and these shelters hold 40 people. You tell me how that’s a solution. That’s what the city keeps telling us, that they’ll have these shelters in three years. When it actually comes and holds 650 people, then they can say they’re doing something.”

“When you have people selling drugs just on the other side of our fence and the police just keep driving on by and there are no consequences, why should they even worry about it?” he said. “So, they hang out here. They smoke their pot. They cut up their meth. They do it all right here on the sidewalk. The city claims they want businesses downtown, but won’t protect them or help them.”

The family has already begun to take inventory home, but they still have the fence around the property until March, Huston said, so they’re taking their time moving.

“It’ll be a process,” he said. “If we get everything taken down, we’ll probably just use the fence to advertise that we’ve moved out to Spring Grove. We want to get more into the landscaping business rather than just retail. So, people can come out there and shop, as well.”

Bonnie Voropaeff, owner of DLG Printing, just down the street from GardenMart, wondered if Marci Huston could use the help of local merchants in moving. Nick Huston said he appreciated the offer, but between friends, his father, brother-in-law and himself, they would be able to make the move.

“It’s not zoned for what she is doing, but we let her keep extending the permit to allow her to stay there,” he said. “Before she was there, there was a homeless issue at that location and everyone was aware of it. It’s not a new thing and we’ve done everything we can, but we can’t put people in jail for being homeless, nor do we want to.”

“I don’t know what more we could do there,” Velazquez said. “We’ve done everything we can to make this work. We can’t continue to ignore this problem and hope it goes away. That’s why we’ve been working toward building this permanent shelter. The city and county have been working as partners to get a permanent solution.”