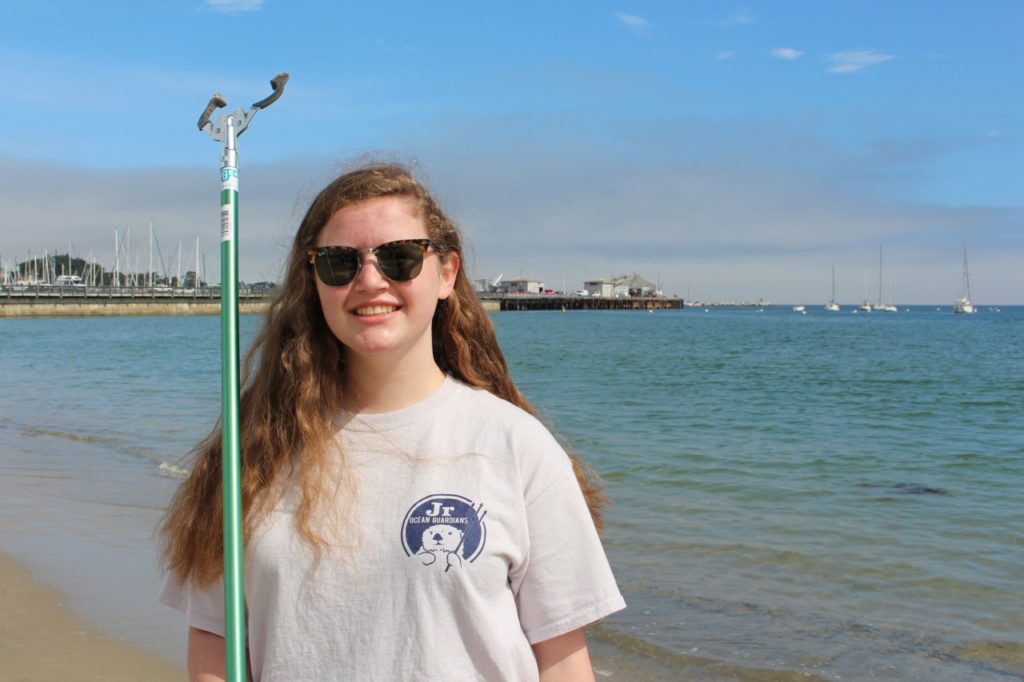 Shelby O'Neil is passionate about the ocean, and how to protect it. Shelby O’Neil, 16, a San Juan Bautista resident and junior at San Benito High School, has been a Girl Scout since she was in 1st grade. She recently decided to go for the highest honor in Girl Scouting, the Girl Scouts of California’s Central Coast Gold Award.

The award, similar to the Eagle Scout award awarded to Boy Scouts, requires that the girls complete quite a few other requirements, including earning other awards. Gold Award receivers must also create a project that, according to the Girl Scouts website, attempts to “change the world.”

O’Neil started thinking about her Gold Award project in 2015, and founded Jr. Ocean Guardians last year. The program aims to educate younger children about the ocean, and more importantly, how to protect it. O’Neil also admits that one goal of the program is to enable young children to “help the world in general.” No small task.

Through Jr. Ocean Guardians, O’Neil creates interactive classroom presentations that are shared with her ideal target audience, which she says is children in or around 2nd grade. “That’s when [the children] start to gain their own opinions, and they become more independent, and they also listen to you,” O’Neil explains.

O’Neil has always loved the ocean. “Growing up in California, especially the central coast, you’re exposed to a lot of beautiful nature around you… and I was always fascinated by the ocean,” said O’Neil. She started volunteering at the Monterey Bay Aquarium when she was young and the program “blew [her] mind.” She quickly realized how much she did not know about the ocean, which was right at her front door, and she wanted to change that.

O’Neil has volunteered at the aquarium for many years, and has had the opportunity to study the ocean up-close, speak with international experts, and learn more about the problems the ocean faces. Though she was studying the ocean, she developed a unique understanding of the human condition. “I found out that adults aren’t super receptive” to hearing about the ocean’s problems “because they don’t want to think that they are hurting the ocean. But kids can understand how their actions can actually affect the ocean, so they are much more open to change.”

And O’Neil is serious about change and so she’s founding one more campaign she calls, “No Straw November.” That project aims “to bring awareness to the many plastic straws that are being used, then thrown away, in a single month.”

To give a sense of the urgency of the plastic pollution problem, O’Neil points to studies suggesting that by 2050, there may be more plastic in the ocean than fish. And one of the biggest culprits in ocean pollution is single-use, plastic straws.

To prevent this “horrifying” pollution, O’Neil is asking that participants refuse plastic straws for the entire month of November, and keep a tally of how many straws they are offered and how many they refuse, and she stresses that “anyone can do it.” Ultimately, O’Neil hopes that people realize how much power they have to affect change, especially when it comes to ocean protection, by taking one, simple action.

Word about “No Straw November” is getting out, far beyond the borders of San Benito. O’Neil has received notes from other Girl Scout groups across the country, from places like Illinois and Wisconsin, who are pledging to support her. So far, she’s had interest from 20 other Girl Scout troops, and counting.

O’Neil has also reached out to corporations like Farmer Brothers Coffee, Starbucks, the Francis Ford Coppola Winery, and Costco, asking that they pledge to participate in “No Straw November.” She’s had some major wins. After O’Neil met with representatives of Costco in Seattle, the store decided to start providing more eco-friendly wooden stir sticks for sale alongside the plastic options.

As if that wasn’t enough for one 16 year old girl, O’Neil was also moved by images she saw of the recent destruction from Hurricane Harvey in Houston. Per usual, she took action. Those who are interested can donate to Jr. Ocean Guardians to get an official “No Straw November” patch. 50 cents of that donation will go toward Houston’s Girl Scout troops, “so they can rebuild their troop, their community, and hopefully their city overall,” says O’Neil.

“I just want to implement as much change as possible,” she says, confidently, just as any other world leader would.