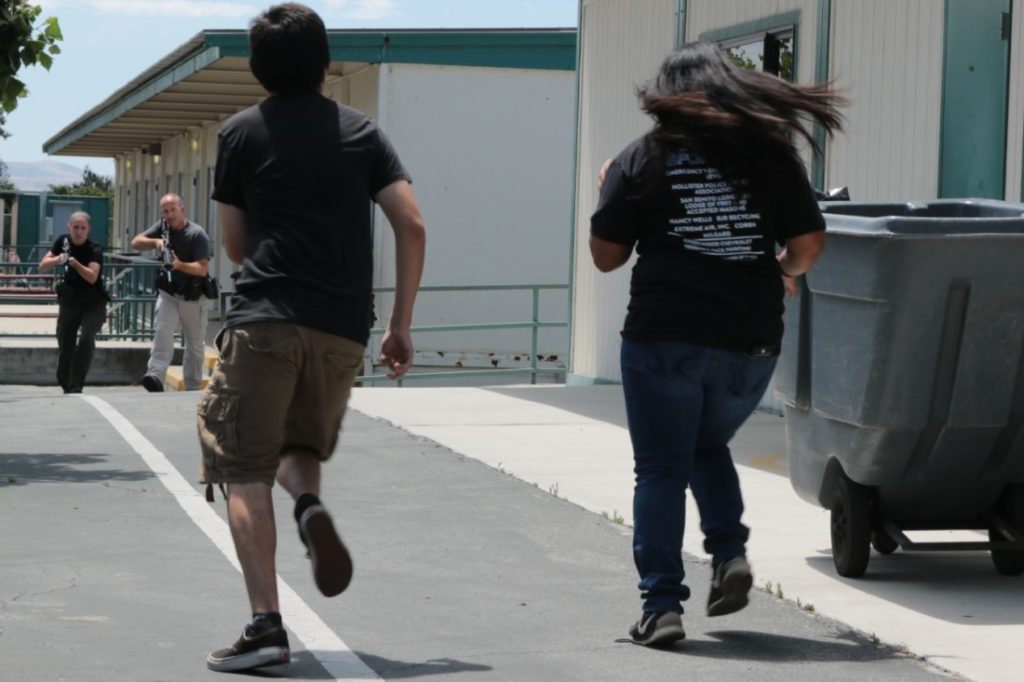 Editor’s note: This article was updated to include comments from San Benito High School

One approach to help prevent school shootings has been to place police, or school resource officers (SRO) on school campuses. Currently in the county, only San Benito High School, with a student body of over 3,423, has an SRO. In July 2020, Hollister School District Board of Trustees voted to discontinue its SRO program to save $230,000 annually. It consisted of two officers who patrolled all the district’s 10 schools.

SROs are responsible for working with school administrators, security staff and faculty on developing comprehensive safety plans to ensure schools are safe places for students to learn.

If an active shooter situation were to happen, HSD schools with more than 5,600 students would be basically on their own until a police officer or sheriff’s deputy arrived. When minutes and sometimes seconds count, bringing SROs back to campuses could save lives, according to Hollister Police Chief Carlos Reynoso.

“We would be in favor of filling those SRO spots because we feel that the SRO program has been very successful in our community,” Reynoso said.  “Besides the obvious security issues, our officers connected with children and their parents. They were also there to help train staff in regard to threats including active shooter scenarios and work together to help keep children safe and also feel safe in the schools.”

Reynoso said if HSD decided to reinstate the program it would need to fund 75% of each officer’s pay and benefits of approximately $140,000. It’s not just about the money, though as Reynoso said it would be a challenge to fill that spot given the department’s vacancies.

“We are struggling to hire personnel as are all the agencies throughout the state,” Reynoso said.

While Reynoso believes the SRO program benefits the community, other local leaders such as Diane Ortiz, executive director of Youth Alliance, say it does not.

She said that police have been overused in responding to community needs, including mental health and school discipline.

“While I know the conversation wants to focus on responses like arming teachers or school hardening, those of us who have been working deeply in the community and looking at the evidence over time, know that this approach is not grounded in solution-oriented thinking, and is simply another knee jerk reaction that fails to address the real problem,” Diaz said.

While there are discussions going on about whether SROs are beneficial, many school districts are relying on more traditional approaches to keep unwanted guests off of their campuses.

Such is the case of Spring Grove Elementary School, which was completely fenced 20 years ago. Additionally, all staff wear school badges and visitors must be registered and wear a badge. Anyone on campus who is caught without a badge is directed to the school office.

Additionally, all school doors remain locked, but have a lock block that can be pulled in an emergency situation.

“After listening to how the events of Uvalde [19 students and two teachers were killed at Robb Elementary School] may have unfolded, I will continue to do everything possible to make sure that this never happens under my leadership,” said Jenny Bernosky, superintendent/principal of Spring Grove Elementary School.

She said the district has a great relationship with law enforcement and that the school practices lockdown drills so the administration can check that all protocols are followed.

San Benito High School after this article was published said through its public information officer Adam Breen that the school SRO’s role is to “build a positive relationship in and around campus, while also providing a service to the surrounding community.” The district said while it contracts with the Hollister Police Department for an SRO, it also works closely with the San Benito Sheriff’s Office and San Benito County Probation Department.

The district also said it implements the big five immediate action response protocol for emergency situations ranging from threats near campus to earthquakes. The protocol includes sheltering in place; securing the campus; lockdown/barricade; drop, cover and hold on; and evacuating.

The district added the high school has invested in safety upgrades including more than 80 high-definition cameras, closing Nash Road between 7 a.m. to 7 p.m. on weekdays, new fencing, procurement of 15 automated external defibrillators (AEDs) that are located throughout campus, the installation of a new campus-wide public address system and a new hand-held radio system for campus supervisors and staff members.

“School safety starts and ends with our community,” the district said. “Our safety team communally works with various community organizations and school districts to ensure that we are all apprised of the latest safety concerns.  We are in consistent communication with our counterparts from the Hollister School District, the San Benito County Office of Education, the Gilroy Unified School District, and the Salinas Union High School District, to name a few. More importantly, we communicate with our students, parents, staff, and community on a regular basis regarding safety concerns.”

The Hollister School District said it would respond to BenitoLink’s questions about school safety but has not done so.

Responding to an active shooter

If there were an active shooter on a campus, Reynoso said, “The response mandated through training has been to go into the school in an active shooter situation, to seek out the shooter and eliminate the threat as soon as possible. This may require officers going in alone or with a partner without waiting for additional support or emergency response teams.”

Each officer is trained to go up against an active shooter because neither Hollister nor the San Benito County Sheriff’s Department has their own SWAT team. “We would rely on mutual aid and our Sheriff’s Office has an agreement with Monterey County Sheriff’s Office” for SWAT assistance, Reynoso said. “Their response would depend on the location of their deputies. However, it is my understanding, several of the members live in our city so their response may be quick if the incident occurs when their staff is in our community.”

Reynoso added, “Ideally, any active shooter incident should be or at least you would hope it should be over by the time the SWAT team would arrive. We train for the responding officers to take out the threat as quickly as possible with the training and equipment they have been provided and which they carry in their vehicles.”

San Benito County Sheriff Eric Taylor said if the incident were in Hollister city limits, HPD officers would initially be in charge, and if elsewhere in the county the sheriff’s deputies would be in charge. But once a SWAT team arrives, he said it would take over command.

The Sheriff’s Office is responsible for the entire county outside of Hollister. Besides schools in and around San Juan Bautista and north to Spring Grove Elementary, there are Bitterwater-Tully, Cienega, Jefferson, Panoche, Southside, Tres Pinos, and Willow Grove schools in the southern parts of the county.

“We patrol the schools as part of our patrol duties,” Taylor said. “The Sheriff’s Office is always here to be part of the solution. We have made a contract with this community that we will always go in and save your children. We have strong partnerships with our allied agencies, and we are all here to support each other.”

But in a county this size, where Bitterwater-Tully Union School is 43 miles from Hollister, schools could wait an hour for a response depending on where the officers are at the time of an emergency. Whereas the King City Police Department, which is just 17 miles away, would most likely arrive first, Taylor said his department is still responsible for responding.

Kieth Boyd, King City chief of police, said, in responding to an active-shooter situation in a rural area his officers, “Arrive, gear up, engage and neutralize the threat to provide for the safety of those in danger whether alone or not.”

Until the police arrive, teachers and staff are expected to hunker down and do what they can to save themselves and their students behind locked doors. The totality of the state’s advice is to hide, run, or in a last-ditch effort, fight.

Active-shooter drills at schools are about saving lives