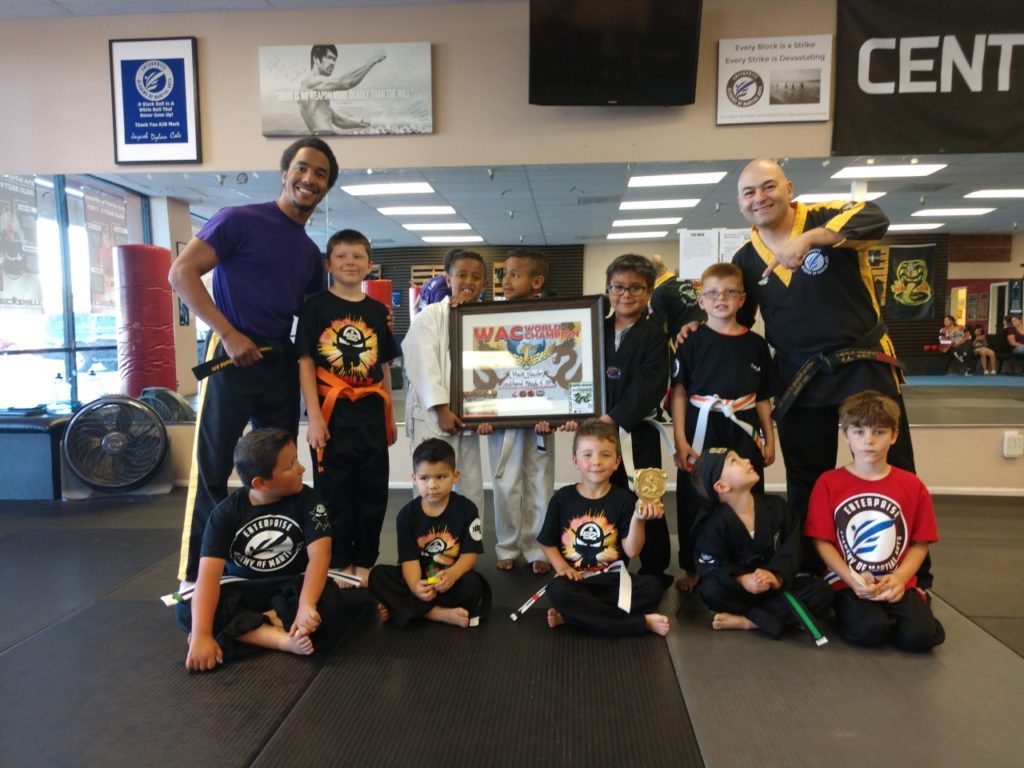 Angelo Hudson and Mark Preader with students at Enterprise Academy of Martial Arts in Hollister. Photo by Carmel de Bertaut. Hollister martial arts instructor Mark Preader recently returned from Portugal with a gold medal after competing in the World All-Styles Championship Martial Arts Tournament. Preader said he participated to teach his students “to never give up no matter how challenging something is.”

Eight-year-old Owen Smith told BenitoLink that Preader tells his students at Enterprise Academy of Martial Arts, “A black belt is just a white belt that never gave up.” The studio is open seven days a week and teaches students of all ages.

“It is inspiring,” said Richard Barries, another eight-year-old student at Enterprise. His sister Mariah Betancourt added that she felt great about Barries being a part of the studio and that she too was inspired.

With 27 years of mixed martial arts experience, 41-year-old Preader entered the Portugal competition as part of the U.S. team, which consisted of 16 members who earned a total of 16 gold, 12 silver and 13 bronze medals competing against 9,000 participants from 72 countries. The competition was by invitation only. Preader said he was invited by head coach Kai Li from Hawaii and assistant coach Greg Garcia from San Jose.

Preader began his road to champion-level martial arts at age 14 when he took Taekwondo lessons in Morgan Hill. He said he developed a love of all martial art disciplines and began teaching at the age of 17. His primary styles are Muay Thai Kickboxing, Kali and Jeet Kune Do.

Asked how he felt about his instructor bringing home the gold for them, Smith said, “It’s really cool, it makes me try harder to get my black belt.” Smith’s mother Katie said Preader was a great influence on the kids.

Preader won several medals in the adult, 40+ male categories at the championship: