Fremont Peak opens its conservatory to the public to learn about the star, suns, planets, and more. Evening programs are offered three Saturdays a month. 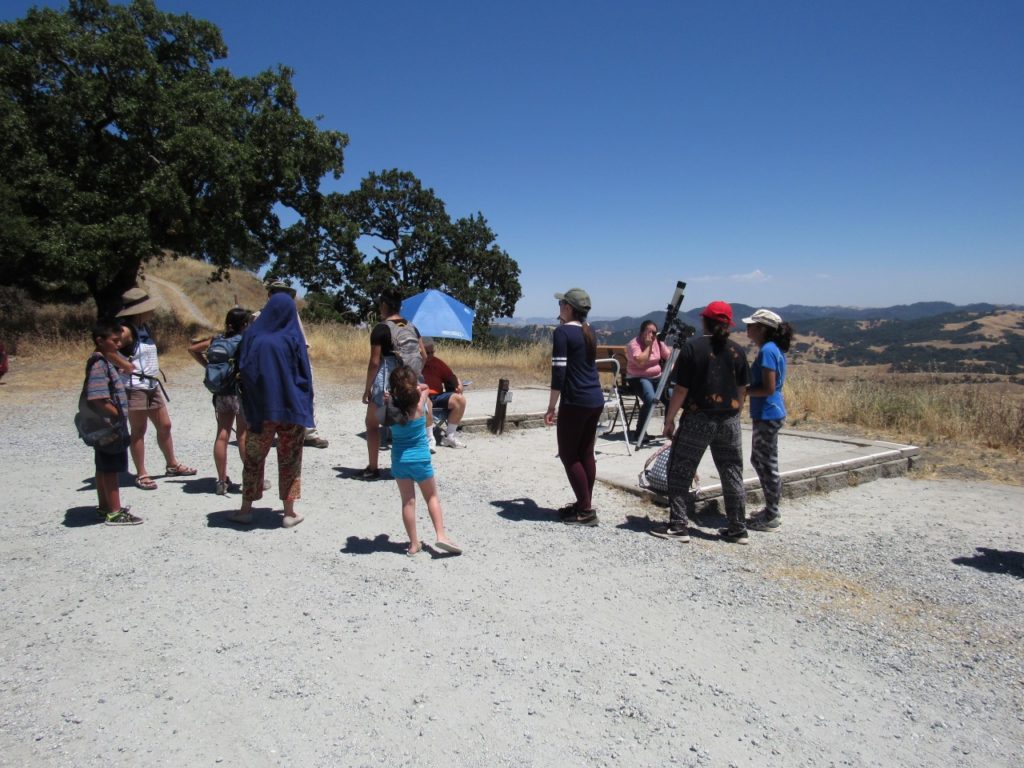 “I basically saw the sun and how there was an eruption in it…you could see flares shooting out of the sun and it was really cool,” said Alya Castellanos, 12, during the day program.

Castellanos said she had been to the observatory before and enjoys taking part of events like this because she likes learning about where she lives and outer space.  Her sister, 16-year-old Ilyne, said she recommends people visit the conservatory to learn from what the volunteers have to say.

“I’ve never looked at the sun, you’re not suppose to look at the sun, so it was interesting to have a new point of view of the solar system and how it relates to Earth,” Ilyne said.

The sisters, among other visitors, used a Hydrogen Alpha telescope that two members of the Fremont Peak Observatory Association set up for the public.

Rob Hawley, association board member and volunteer, said the telescope allows public to look at hydrogen gas in the sun, which appears red through the eyepiece. The association normally sets up another telescope to look at sun spots, he said, but didn’t this time because they weren’t visible.

The programs are scheduled based on moon cycles. The day programs are held once a month, while night programs are offered three times a month through September and two others in October.

During the night programs, members of the association give a lecture at the beginning before visitors are allowed to use a 30-inch Classic Newtonian telescope located in a small room, along with five other smaller ones located outside.

To use the 30-inch telescope, the public must climb a ladder to reach the eyepiece.

Hawley, the amateur astronomer as stated by his business card, said visitors can see Venus, Saturn, Jupiter, and Mars depending on the day. Visitors can view things not visible in cities because of the darker sky due to the limited light at the Fremont Observatory.

Visitors are asked to turn off their flashlights before passing the ranger house, located about 40 yards from the observatory, to maintain darkness. There is a red safety lighting to guide visitors to the conservatory.

Hawley said it is also important to do this to allow eye adaptation in the dark, which allows visitors to see dimmer things later in the program.

Hawley also said the association is encouraging people to learn about the night sky, astronomy, and why keeping the sky dark is important. He said the conservatory gets between two and 200 visitors per program.

“It’s worth driving up the hill,” Hawley said.

Hawley said he travels from San Jose to the observatory because he has been interested in astronomy since the 60s when President John F. Kennedy shifted more focus on the space program, essentially placing the United States in a space race with the Soviet Union.

He added that when he retired as an engineer he placed more time into his interest, which includes chasing solar eclipses. Some of his trips include Lybia in 2006, China in 2009, and Australia in 2012. According to Hawley’s page, he has witnessed “virtually every eclipse since 1999.”

Hawley said the conservatory is in a great place because it’s close enough to cities where the drive is not too long and far enough from towns that lights don’t interfere with the experience.

Program dates and times are listed on https://www.fpoa.net.