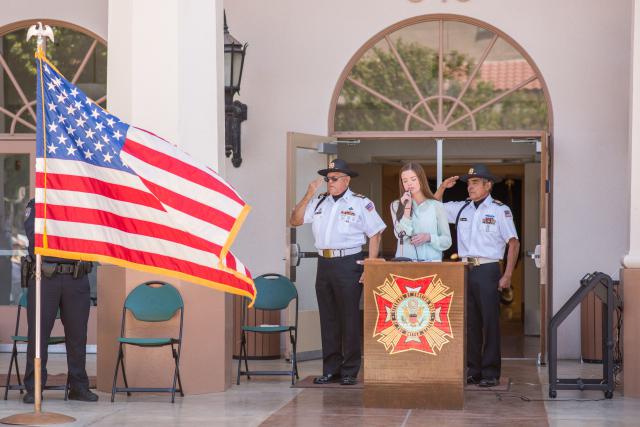 Local military members were honored Monday at the Memorial Day memorial service at the Veterans Memorial building in downtown Hollister. At least 250 people gathered to celebrate those who served the United States.

"It's important to remind people of the sacrifices soldiers make," said Jose Aguirre, a Desert Storm and Desert Shield veteran, prior to the ceremony. "It is something that can't be forgotten."

The ceremony opened with a prayer by Bernie Ramirez, post commander of Veterans of Foreign War 9242. The National Anthem was sung by a local high school senior. Various local members of the community spoke, including fire captain Bill Garringer, who gave a moving speech including a tribute to the firefighters who died during the 9/11 attacks. His speech was also peppered with humor, including a tidbit how he and his father were walking by a firehouse when he was young and they peeked in and saw the firefighters drinking coffee and playing poker. His father told him "if I were you, I'd be a firemen" to which the crowd responded with laughter.

The honoring of veterans actually began earlier in the day as graveside services were performed at three cemeteries, two of which were in Hollister and one in San Juan Bautista. Ramirez said the services were "very successful. A great group of people put up flags at 5 a.m.," Ramirez said.

"Taps" was played and the honor guard shot off rifles at the cemeteries.

"I thought the ceremony was very good," Raymond Valles, a Vietnam Veteran said following the ceremony. "I love my country and I would like to thank my beautiful wife for putting up with my post traumatic stress disorder."

The downtown Memorial Day ceremony was followed by a tri-tip luncheon to which the public was invited.

For more photos from the event, visit the BenitoLink Facebook page.