Group demonstrates against separation of families and treatment of children at the border. 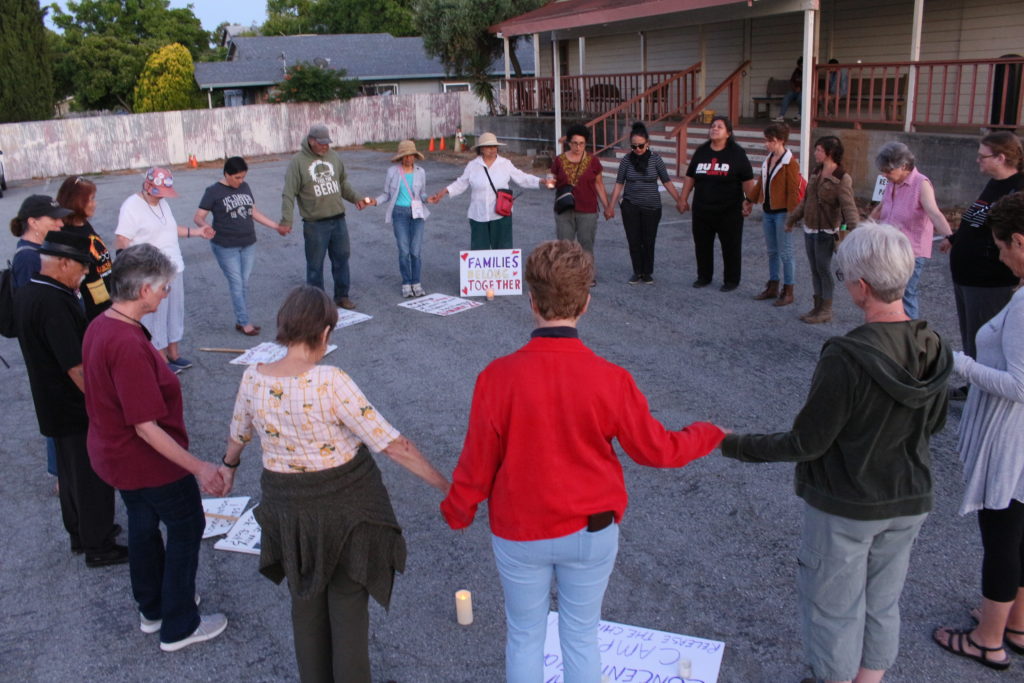 Group of demonstrators pray before the end of the vigil. Photo by Noe Magaña.

Cynthia Ponce sings while holding a sign while looking at the lyrics in her phone. Photo by Noe Magaña.

Cynthia Ponce (left) and Sara Frias hold their signs during the vigil. Photo by Noe Magaña.

Two demonstrators hold hands while the group shares stories and concerns regarding the treatment of immigrants at detainment facilities. Photo by Noe Magaña.

An emotional Sara Frias (center) holds Fallon Greig's hand as she shares stories of immigration and why it's important to support refugee seekers. Photo by Noe Magaña.

About 25 residents from Aromas, Hollister and San Juan Bautista sang and chanted as motorists passed by on Fourth Street. The group also shared emotional stories of immigration and finished with a prayer, stomping and applause.

“Instead of going out of our communities, bring the community together to express horror and our hope that people will recognize how this is such a disastrous policy as well as inhumane,” San Juan Bautista resident Cynthia Ponce said. “Against just all the principles of our country to put children in cages, to seperate families the way they have been doing.”

According to media reports, detention facilities used to house undocumented immigrants along the sourthern border are hot and overcrowded, and detainees, including children, do not have beds, blankets or adequate food.

According to the U.S. Customs and Border Protection, there have been over 688,000 migrant apprehensions this year. Roughly 390,000 of those apprehended are family units; a minor with an accompanying family member.

Ponce is a member of Comadres de San Juan, a group of women who gather weekly for social, spiritual and activism discussions.

She led the vigil chants by asking “What do we want?” and the group responded with “kids out of cages,” “families together,” or “Trump in prison.”

Ponce said the group gathered at El Teatro Campesino because it has long been part of the movement of social awareness and activism.

Hollister resident Sara Frias said she was angry at what the immigrant families have to endure.

“As a parent I can identify with them, that I would feel humiliated with this decision of separating children and putting them in cages when they do nothing wrong other than seek asylum in this country,” Frias said.

Andy Hsia-Coron with local grassroots group Preserve Our Rural Communities said growing up as a Jewish person, the lesson from the Holocaust and the pogroms in Eastern Europe is that it should never happen again to anyone.

“People, when they see dehumanizing conditions, when you see racism, when you see a systematic effort to deprive people of their rights, have an obligation to stand up and say no,” Hsia-Coron said. “It’s appalling that this country has gotten to this point. It was not good under Barack Obama, he deported many many people, but this is an overlay of racism and almost fascist hostility.”

Near the end of the vigil, the group formed a circle and expressed their heartbreak over the separation of families and mistreatment of children. During the discussion, several members said this situation goes beyond President Donald Trump, given the nation’s history of treating other immigrant groups, and referred to the immigration detention sites as concentration camps.

Mary Hsia-Coron said the immigration system discriminates against hardworking and less educated immigrants, compared to those who are better educated. What bothers her the most, she said, is that the country has not learned from its past actions like the Chinese Exclusion Act.

“We are a country of immigrants,” Mary said. “Just because the latest immigrants are the ones that are the most vulnerable, we can’t abuse them the way we have been doing for years and years.”

“How come the entire town of San Juan isn’t here?” Greig said. “The complicity of the American people is just astounding.”

Ponce said people who are not able to participate in demonstrations but want to be informed or want to donate can do so to organizations such as American Civil Liberties Union, Border Angels, Families Belong Together, Raices and Parents Together.