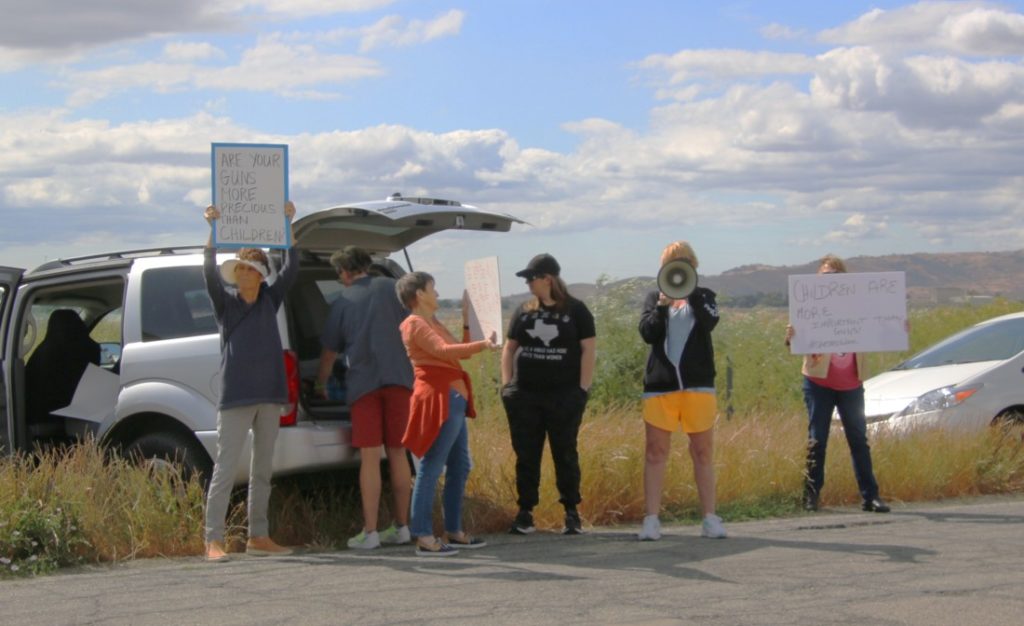 Protesters said their issue was not about owning guns, but about teenager being able to get an automatic weapon. Photo by John Chadwell. 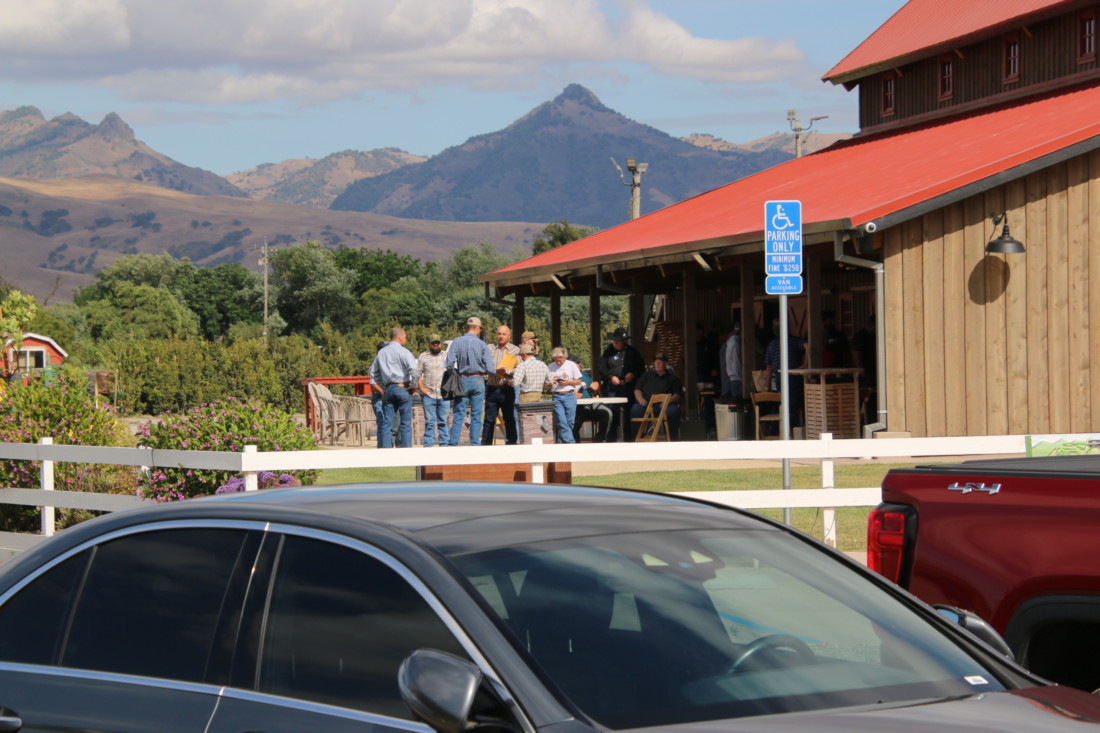 The sold-out event was reportedly to raise money for the HPD police explorers program. Photo by John Chadwell. 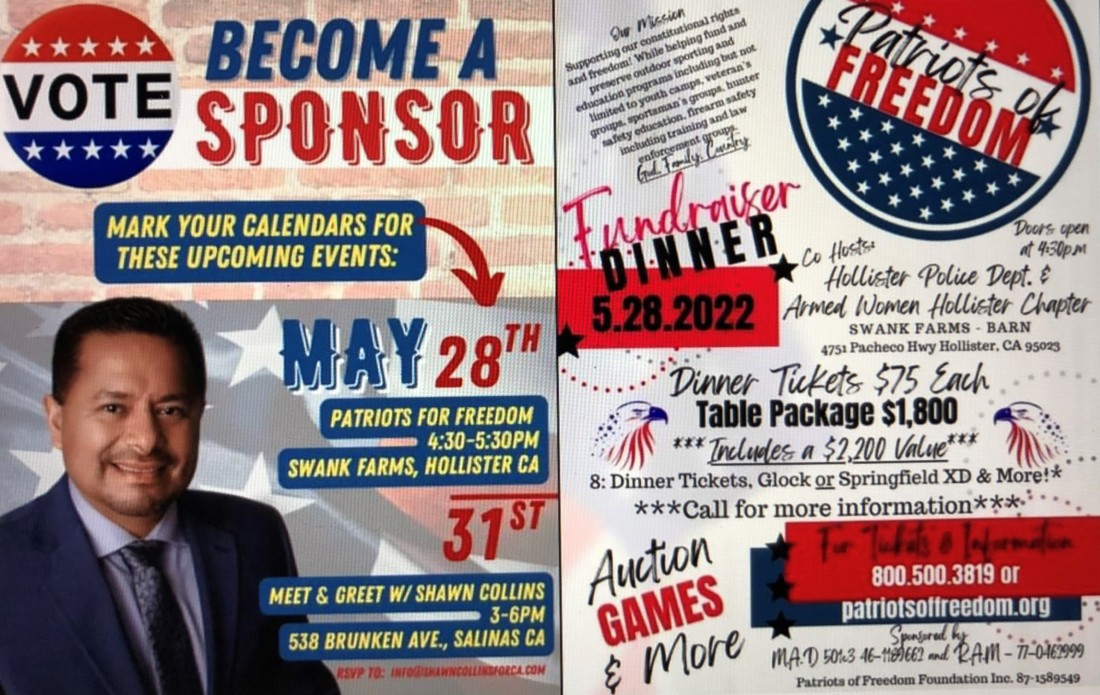 San Benito County Supervisor Peter Hernandes, who is running for Congress, promoted the event on the HPD Facebook page. Photo by John Chadwell.
×

Editor’s note: On May 31 Benitolink added a comment from Peter Hernandaz. That comment can be found at the end of this article.

Six Protesters gathered across the street of Swank Farms in Hollister on May 28 where a fund-raising event was being sponsored by the Patriots of Freedom.

The Patriots of Freedom is a nonprofit organization whose stated mission is to “help fund and preserve our Constitutional rights and freedoms, outdoor sporting and education programs, veterans’ groups, sportsman’s groups, youth camps, law enforcement departments, hunter education and safety, firearm safety and training, and fire departments via grants from our events.”

Patriots of Freedom President Shela Boer told BenitoLink Swank Farms, located at 4751 Pacheco Highway, was providing the venue but was not involved with the organization.

Boer said the Fresno-based organization founded in 2021 helps veterans, law enforcement, youth groups, Christian camps, and outdoor sporting. “We fundraise for them now and in the future, we hope to do grants,” she said, adding the event that night was to raise money for the Hollister Police Explorers program. Boer told BenitoLink Swank Farms was providing the venue but was not involved with the organization. This reporter was escorted into the building by an armed man who said no photos were allowed by Swank Farms’ orders.

According to the HPD website, the program is “designed as a mentorship program for youth who are interested in pursuing a career in law enforcement.”

Across the street, Catherine Eva Booth-Vaughan said the protesters were “like-minded citizens” objecting to an “outside group promoting guns.” She said the group was claiming the Hollister Police Department was hosting the event on a flier on social media. “They have since taken it down, but the HPD is taking money from the group.”

“The police chief [Carlos Reynoso] knew about the error on the flier months ago,” Booth-Vaughan said. “If that’s the truth, he should have gotten way out in front of this and let people know. It’s my opinion he thought he was going to be able to get this thing going and didn’t realize there would be two major shootings and he probably thought nobody was paying attention. For HPD to take money from gun groups and lobbyists it’s a bad look to people who want to trust the police department.”

A letter posted May 28 on HPD’s Facebook page, stated numerous citizens had notified the department that the flier claimed it was co-hosting the event. “We are not and have never been co-hosts of this event,” the unsigned letter stated. “We contacted the organizers and asked them to remove the label from the flier and they complied. They agreed the flier should have listed the Police Explorer Program as the beneficiaries and not the co-hosts.”

The letter continued, “We do not equate acceptance of monies to support our youth program as condoning any violence, or political position with regards to the gun debate. We see it as an opportunity to better provide for our Explorer program. We are apolitical in regards to the gun debate and will continue to follow the courts and legislature’s directions on gun laws and gun control; which California has some of the most strictest [sic] gun laws in our nation.”

Protester Melissa Gong said, “Nineteen children were just gunned down by a monster with a gun who was 18 and shouldn’t have had one. If you buy eight tickets to their fundraiser you get a free gun.”

Booth-Vaughan described the organization as a National Rifle Association (NRA) lobby. “The Hollister Police Department should not be taking not one penny from any NRA lobbyists,” she said. “I’m here because this is in poor taste. Our kids don’t need to learn about guns.”

Loretta Avina, who was also protesting, said, “This is supposed to help fund a program to promote law enforcement careers to the youth of this county. People are donating with the carrot if they do donate they get a free Glock or Springfield XD handgun. This event is being held by Swank Family Farms, where children come to run through their corn maze. They’re taking this organization’s money. They don’t care.”

Three of the women said their vigil was not about guns, stating they or their spouses owned guns. They were objecting to an 18-year-old being able to buy automatic weapons and ammunition meant for war.

“Our newly installed supervisor chairperson, Peter Hernandez, is promoting this and is going to be attending this event,” Gong said. “There is an epidemic of guns. Three members of this like-minded group are healthcare providers. It is our responsibility to advocate for people to be at their optimum level of health and giving away free guns when you purchase eight tickets is not the optimum level of health.”

“He [Hernandez] should not be attending, regardless of what his beliefs are,” added Avina. “He should have respected what happened in Texas, and the week before that in Buffalo. He should not be here promoting the giving away of guns.”

“I’m not saying take guns away, like I said, I have a gun, these automatic weapons are horrible and they’re killing our children,” Gong said.

Patriots of Freedom immediately responded to BenitoLink for comments.

Hernandez responded May 31 that he did attend the event because he believes in supporting “good and necessary causes.” He said, “We are at a time in California where the need for public safety has increased. Decriminalization laws, defund the police movements, and the police receiving negative press has hurt our proper staffing levels of public safety.”

He continued, “As an example, San Francisco needs 500 officers. San José needs 200 officers, and I believe LA is short another 500, which is proof people aren’t wanting to work in public safety. With the latest tragedies we need more than ever public support for public safety, and programs that prepare the next generation to ’serve and protect.’”