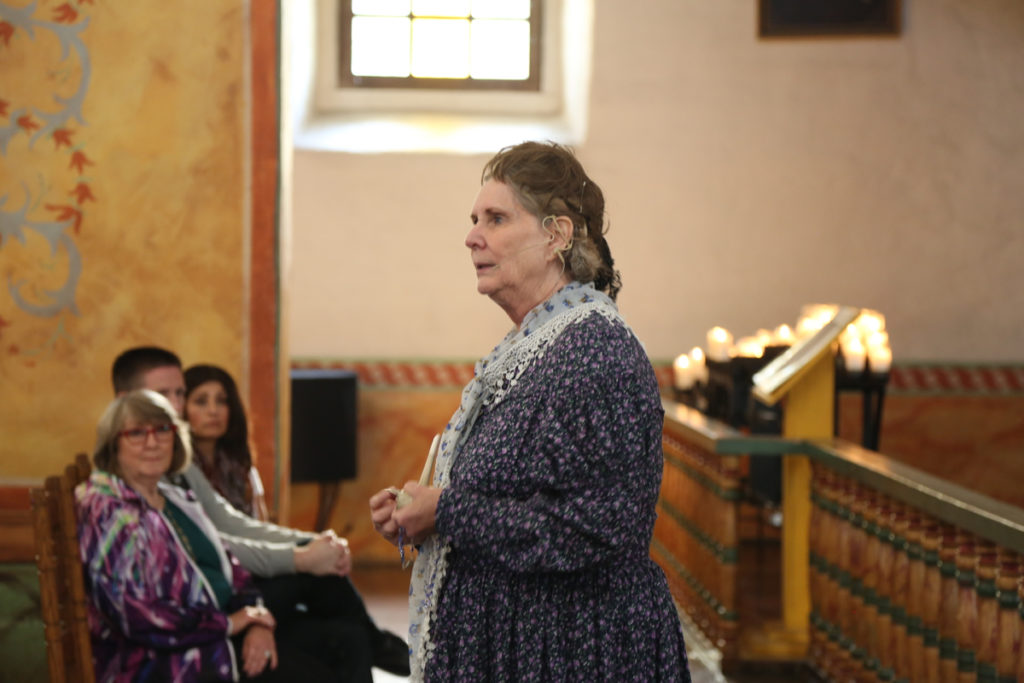 Before he took his place at the front pew of the San Juan Bautista Mission church, 22-year-old San Jose State University senior, Michael Breen, confessed to BenitoLink that he knew little of Margaret Breen, his great-great-great-great grandmother. When Margaret’s incarnation stood before him, the Hollister native sat motionless, listening to the life-story of his family’s matriarch echo through the nave.

The fund was founded last year in order "to strengthen, preserve and conserve the architectural and structural integrity of the historical property and the artifacts of the" mission, according to the organization's website.

Wearing a period dress, clutching a rosary and pipe, and speaking in brogue, Dwyer transformed herself into Margaret Breen.

Though the 90-minute chautauqua (pronounced, shuh-taw-kwuh) spanned Breen’s life from her childhood in Ireland to her final days in San Juan, a significant portion was devoted to “The Journey” and “The Trouble in the Mountains”—a reference to the Breens’ travels as members of the Donner Party and to the hardships that befell the group while it was trapped in the Sierras for months.

Inspired by John C. Fremont’s published works and the limitless possibilities in the land he described, Margaret and her husband, Patrick Breen Sr., decided to leave their home in Iowa and head west with their seven children, ranging in age from 14 years to 6 months old. It was April, 1846.

At Independence, Mo., the Breen clan teamed up with several other families, more for survival than for company. The caravan became known as the Donner Party.

For hundreds of miles, “The Journey” remained largely uneventful. That is until the group decided to take an unchartered path that the dubious explorer, Lansford Hastings, claimed would save emigrants weeks along the trail.

Margaret had doubts about the “Hastings Cutoff.” And it wasn’t long before her Irish intuition was confirmed.

Within days, her son, Eddie (Edward), suffered a broken leg after falling from a horse. Next, a shredded note from Hastings was found dangling from the brush warning the party to turn back. A nearly impenetrable forest slowed the group’s pace to a crawl. A fellow traveler, James Reed, killed another in self-defense and then was banished, leaving his wife and young children at the mercy of others.

“I’ve should have seen these omens,” Dwyer dejectedly said as Breen.

The group of nearly 100 men, women, and children finally reached the Sierras on Oct. 31. Rather than press on through the snow-covered pass into modern-day California, the families decided to wait out the winter near a mountain lake.

The Breens found shelter in an abandoned cabin. “The little shanty” became the family’s home during the time Margaret dubbed “The Troubles in the Mountains.”

Unlike the others, the Breens had an ample supply of food. They had brought a large number of cattle with them from Iowa. But one-by-one the cows began to drop dead in the freezing temperatures.

Patrick Sr. ordered his boys to pile pieces of wood above the place each carcass was buried. He told Margaret that the family would survive on a steady diet of hides and hoofs. The beef, he said, would need to be saved for leaner times.

Despite the frugality forced upon the Breens, a degree of normalcy was maintained.

Margaret smoked her pipe and drank tea with her guests. The children danced as their father played his fiddle. Patrick Sr. started a diary, chronicling the weather, and occasionally noting the death of others, including the family’s dog, Towser, who was shot and killed for dinner. And as the world outside grew ever bleaker the family remained devout, reciting its daily prayers during Advent.

The less fortunate turned to the Breens for food and support. Margaret helped those she could, like the Reeds, but others were turned away, as her maternal instinct guided every decision she made.

“It was a time of very, very difficult choices,” Dwyer said as Breen.

Hope finally arrived with a rescue party in Feb. 1847. Unfortunately, the rescuers were limited by the provisions they had allotted for the return trip to Sutter’s Fort. Consequently, only two Breens would be given the opportunity to leave.

Margaret agonized over her decision to let her two, healthiest children, Eddie (13) and Simon (9), depart from the shanty. Seven weeks passed before she was reunited with them.

The rest of the family set out with a second rescue party a few weeks later. An unrelenting snowstorm halted their progress up a mountain. Margaret and Patrick Sr. stayed behind with their children and few others, digging a snow pit for refuge. The husband and wife decided it was best to die as a family than to perish one Breen at a time.

A fire was built in space that held 11 emaciated and frost-bitten bodies. 5-year-old James Breen clung to life. A clump of sugar his mother put in his mouth, she later claimed, saved him.

After nearly a week, Margaret emerged from the pit, the sound of mens’ voices harking the arrival of angels. “There’s Ms. Breen, and she’s alive,” someone cried out.

A debate then ensued among the rescuers. It was decided that because the Breens had initially passed up their chance at safety, they would not be rescued. John Stark prevailed in dissuading his fellow rescuers from deserting the family.

All nine Breens eventually settled in San Juan in 1848. The local priest had invited them to stay at the Mission until they found a permanent home.

A stroke of Irish luck came the Breens’ way when their son, John, made a fortune mining during the Gold Rush. He gave his parents enough money to purchase the adobe that would be owned by the family for decades. Since the 1930s, The Castro-Breen Adobe has been a part of the San Juan Bautista State Historic Park.

Dwyer concluded her chautauqua out of character, stating to the audience that for 20 years she has strived to provide “an accurate, historical portrayal” of Breen, noting that of all the women who survived the Donner Party, “she has the best story to tell.”

“It’s pretty cool how the family got here and in a pretty cool way, too” he said after the event, adding that he was surprised to learn how much Margaret and Patrick Sr. collaborated throughout “The Journey and The Troubles in the Mountains.”

And Michael appreciates his family’s legacy—beaming with pride when he travels over Donner Pass or bragging, if just for a moment, when his college baseball teammates or friends come to him after learning about the Breens in their history class. 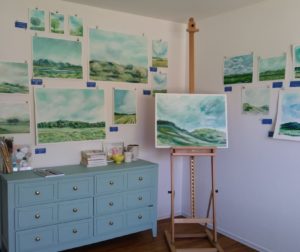