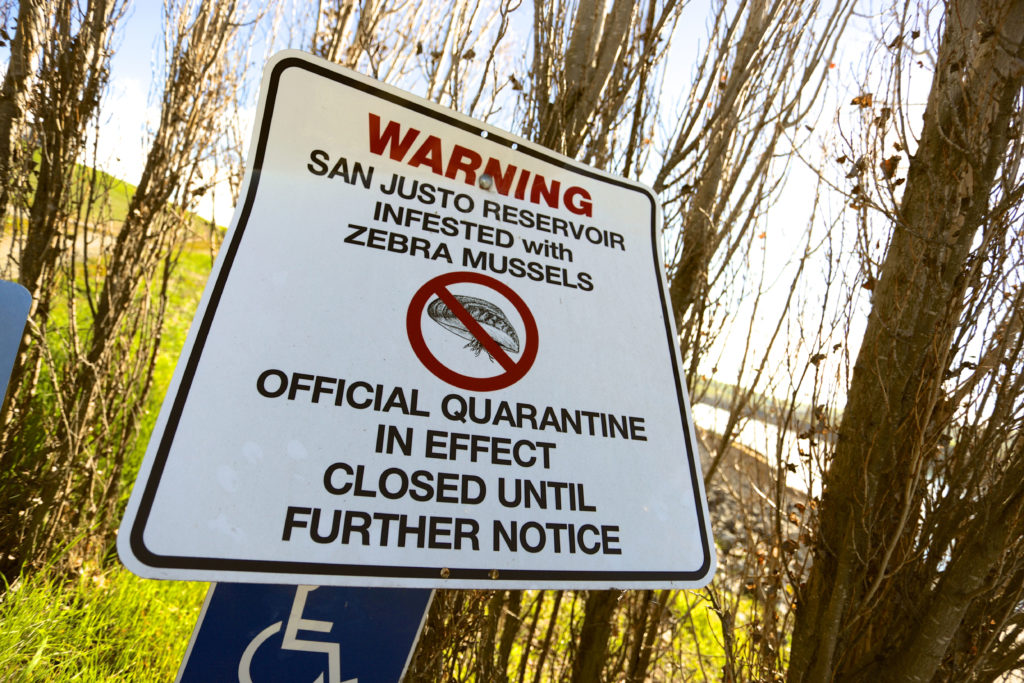 It’s pretty much understood that when two fishermen get together fish tales are bound to be uttered. Some of them will be whoppers. But when 30 or more anglers gather in one spot, it's either a hot fishing hole or it’s a movement.

That’s what took place Feb. 17 at The Vault in downtown Hollister, when concerned citizens gathered to voice their discontent over the continuing closure of San Justo Reservoir and the perceived apathy of the federal government to do anything about the infestation of Zebra Mussels that has closed down the once-popular fishing spot.

The meeting was truly a grassroots gathering of like-minded folks who said they just want to go fishing. But it was also a call to action by the mayor of Hollister, who essentially coached those gathered on how to protest the closure.

The word about the meeting spread through the community by Facebook and more than 100 people quickly indicated they were interested. While only 30 or so actually showed up at the 6 p.m. meeting, those who did were enthusiastic and boisterous, and by the end of the meeting, were fired up enough to organize a protest.

The call-to-arms, as it were, was unofficially spearheaded by Hollister resident Andrew Williams, who asked Mayor Ignacio Velazquez if the meeting could take place at The Vault, which Velazquez owns. He said it could. It was obvious by the mayor's comments during the meeting that he was whole-heartedly on board, more so as a private citizen than as the mayor. He even gave tips to the group on how best to mount a campaign to bring back fishing at San Justo — which is not within city limits — after it has been closed for eight years.

“The only way we’re going to get it open is to have voices heard,” Williams said in opening the meeting. “One voice is not going to be heard. Voices will be heard if we get out and get the petitions and signatures, get the media involved, the state assembly, and the local supervisors, to get the word out that we want our reservoir back. Our tax money paid for it and they took it away.”

“How involved is our assembly?” one person asked.

“Not very much,” Velazquez said.

Another asked, “Is it just closed and we’re done? Has (Congressman) Sam Farr been approached on this?”

“You guys have been posting (on Facebook) about this for a while,” Velazquez said. “We’ve had conversations with the feds, supervisors, and the water district. But at the end of the day, it’s the feds that control it. Everybody shifts the blame and that’s why nothing is getting done and the feds aren’t interested in moving on anything because they don’t want to pay to kill this (Zebra Mussels) off. They’re going to study and talk about it. They know what they’ve got to do, but they don’t want to pay for it. They want the county or the water district to pay for it.”

Velazquez said even if the county or water district did pick up the tab to clean up the reservoir, the federal government would still not release it back to the county. He said maybe the grandkids of those in the room might one day fish at San Justo if nothing were done. He said as long as people were content to complain on Facebook and not back it up with action, nothing would change.

He told those gathered that they need to better understand how far they’re willing to negotiate because the federal government will challenge them at every step, first with no boats, then no personal fishing gear, arguing that each would spread the Zebra Mussels to other bodies of water. A main reason the reservoir has been closed is to prevent the spread of the invasive creatures, which can be transported to other waterways by attaching themselves to boats or fishing gear.

“This group is a powerful number, but when I say 50 is better it's because that’s when politicians take note,” Velazquez said. “Fifty people means 50 votes. You are dedicated to make sure this happens. So you pick a day and show up there at the gate demanding it opens. My part is I call the news media and tell them we’re going to be out there protesting. They show up. A story is done. Now a congressman says, ‘What do you mean, I’m in favor of fishing.’ Here’s the opportunity. He’s (Farr) retiring this year and there are two people running for that seat. Do you think both will show up and support you? It’s all in the numbers.”

The mayor promised to call both people running for Farr’s seat.

“Now you have the media on your side and you’ve got a movement going,” he said. “This is when we need more people. If they don’t open the gates, what should we do next? What would happen if 100 people showed up with their fishing poles and jumped the fence? You think the sheriff is going to arrest 100 people?”

Velazquez intimated that the sheriff would most likely not take action if the group included supervisors and two hopeful politicians.

“Without a big enough group they can pick us off,” he said. “A big enough group changes all the dynamics. The sheriff won’t want to get in the middle of it. Are the feds going to do something about it?”

“Like in Oregon?” one called out, referring to the stand-off between a self-described militia and federal agents on government-owned land.

Velazquez said it would be different if a politician showed up and assured the group if they were solid and willing to stand by their actions, the gate would open.

“Something’s going to happen, but it won’t if you guys aren’t willing to stand up for it,” he said. “You’re going to have to commit and show up there and protest to get their attention.”

He said if protesting doesn’t work they would have to “go to the next level,” but didn’t say what that meant. He said they can’t get to a point of negotiating unless they push.

“Facebook will only work if they get more people involved and everybody here has to commit to getting some more people,” he said.

One in the group wondered why there shouldn't also be an effort to clean up the problem. Velazquez reiterated that San Justo won’t be cleaned up because of the blame game between the federal government and county entities. He said the goal is to go fishing. The man suggested that perhaps there needs to be a push toward declaring it a recreation area so more people interested in other activities, like hiking, might add their support. Velazquez countered by saying only those who want to fish are “hard core” enough to push back against the government.

One man commented: “For all the studies they’ve made they could have already killed the mussels. Even if they killed all the fish they could re-stock.”

Williams added with a degree of frustration, “When they first started they said, ‘let’s do potash in it,’ Let’s drain the lake, dry ‘em out, clean the pipes, put new pipe in, and then refill it. That was the first thing they talked about. It didn’t happen. Then they said they wanted to see how they multiplied. Well, they multiplied because you didn’t do anything to clean them up.”

Velazquez countered: “At the end of the day, it’s real simple. You either want to get it open or you don’t.”

Another quantified somewhere between sarcasm and earnestness: “So, we either protest at the gate and get at least 200 people and KSBW News, call 4-H, call the Girl Scouts, the Boy Scouts, and get them all out there.”

Velazquez said once they make it through the gate and are fishing, change will come over time. Williams said if San Justo would operate as other area lakes do with inspectors checking every boat, it would be possible to have boats again. He said it would be the boat owners’ responsibility to assure their boats were dry inside and out before moving from one lake to another if San Justo were to open again to boats.

Velazquez reeled in the conversation. “Now you’re going into their world, scientific studies” he said. “You don’t want to go there. They’ll beat you every time. The question is not about boats. No boat will go on there, I tell you that right now. It’s can you go fishing or not? It’s about how you can get past that gate to go fishing. If you’re thinking about your boat that will shut this whole thing down, so it’s better not to mention it.”

One woman suggested recruiting colleges that are doing scientific studies. Velazquez remained adamant, stating that “environmental stuff is crazy,” telling her that it’s hard to imagine the dollars poured into environmental studies.

“You don’t want that argument,” he told her. “The argument you want is you want to take your kids fishing.”

One man asked if they should sign an online petition and Velazquez told him that online petitions don’t scare anyone, only bodies scare people into action. A number of individuals voiced various concerns ranging from safety, traffic, parking, picket signs, calls to the media and others.

Williams interjected that if they didn’t move quickly, interest would wane and said that there was a need to move right away by posting on Facebook that there would be a protest and they needed to come up with a date. Another person suggested there be one more meeting in order to assign tasks and determine the date for the protest. And another man recommended that each person spread the word in their individual communities, organizations and workplaces. Velazquez advised everyone to email government officials.

“If I came into work and found 30 emails about San Justo and I’m being blamed for it, I’m a little worried,” he reasoned. “Supervisors, congressmen and all people running for office should get that email.”

Velazquez said that any protest should happen during the week, preferably a Tuesday or Wednesday, so the media would be more likely to cover it. He explained how news reporting works, “The worst thing you can do is to have this on a Friday, because no one cares. And no one will show up on a weekend.”

After some wrangling about commuting times and other considerations, the group agreed to hold another meeting at 7 p.m., Feb. 24 at The Vault.