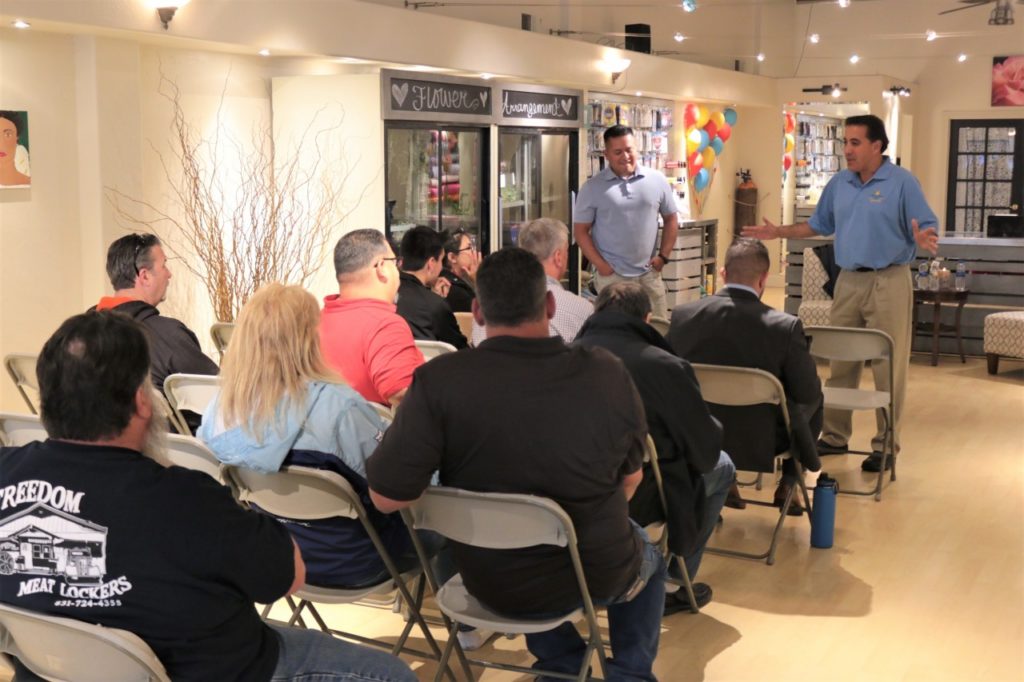 While the audience was meager at a May 16 meeting hosted by Mayor Ignacio Velazquez and Supervisor Peter Hernandez, the topics were far-ranging. Photos by John Chadwell. Among the 14 who attended were Hollister School District trustee Rob Bernosky, Hollister Councilman Rolan Resendiz, County Supervisor Jaime De La Cruz and Deputy County Administrative Officer Edgar Nolasco. Velazquez joked that even with the number of political leaders in the room, no rules were being violated.

The mayor led the conversation for the most part, but did prod one attendee to ask a question, and at one point provided some of the questions himself as the meeting proceeded in fits and starts. Little new information was revealed.

Velazquez started off by relating a story about Facebook accounts which he said were created by locals to put out false information against anyone who opposed growth, namely himself and Councilman Rolan Resendiz. However, Velazquez has been repeatedly accused of spreading false information on social media. In a recent BenitoLink article, Resendiz accused fellow Councilmembers Honor Spencer and Carol Lenoir, as well as former councilman and now Pinnacle Strategy president Victor Gomez of spreading rumors about him.

Bernosky was the first to comment and ask a question. He said he’s been asking downtown businesses whether they would rather have a conventional business or a retail cannabis business next door to them. He wondered out loud if he was overly concerned about what cannabis would do to the community.

Hernandez said he was conflicted about cannabis and had to get past his own biases about it out of concern for protecting the community. He said as an owner of a family-oriented business (Ohana Shave Ice), people have an expectation of a safe environment.

Referencing the mayor’s comments about people attacking him on social media, Bernosky said he has also been attacked because of his stance against cannabis. He said there are few facts included in the online diatribes and wanted to know how much actual research Velazquez and Hernandez had done regarding cannabis.

Velazquez said he visited numerous cannabis-related businesses and talked to officials in San Jose and Salinas. The first red flag Velazquez said he spotted was when pro-cannabis people kept saying how much money the city would make. He said it wasn’t possible for Hollister to make “tens of millions of dollars” because it has become a commodity that everyone is selling.

Hernandez added that the cannabis industry is trying to get local municipalities to drop their tax rates to increase profits in an attempt to “justify their existence.”

Discussion turned to roads when resident Maremma Torrenueva asked about the expansion of State Route 25. Velazquez told her it would cost over $350 million, including bonding costs, and that it was on a fast track to be completed in eight years.

Torrenueva also wondered how Hollister was being promoted to attract tourism.

Velazquez said it’s important to “celebrate what we have,” and that he is frustrated because the city and county aren’t properly promoted, even though in May 2018, he and the rest of the council voted against paying the San Benito County Chamber of Commerce $390,000 over five years to do just that when they couldn’t come up with a motion to do so.

In Hernandez’s opinion: “We haven’t figured out how to sell it and we default to houses, which is making us a suburb of San Jose. Which is the last thing we want to be.”

He said what disturbs him is seeing RVs passing his store en route to Pinnacles National Park or Hollister Hills without stopping in Hollister.

“We’re really missing out because we’re not good at selling a vision,” he said.

Bernosky asked how people felt about the biker rally. Though Velazquez said there is no city-sanctioned rally taking place this year, the unofficial Hollister Rebel Rally is set for July 4-7. He told BenitoLink that he hopes for a sanctioned rally in 2020.

Velazquez said that people say they want tourism, but not tourism from bikers.

“Like it or not, this is who we are. We have motorcyclists who come from around the world to see Hollister, and rather than embrace it, we’re saying ‘That’s not what we want. We want houses, that’s what’s going to fix our problems.’”

He said he purchased the Vault property in downtown Hollister because of the rally and that while things went well for a couple years, people started saying they didn’t want the rally because it was bad for the city’s reputation. He said the Vault did two months’ worth of business in a single weekend and that other businesses should do as well, adding, “We shot the golden goose.”

However, numerous city merchants have told Benitolink over the years that the motorcycle rally did not benefit them. Many actually closed their businesses during the event. In a 2016 Benitolink article, several residents spoke against the rally. Resident Christi Howe said at the time that the rally had a long history of “political maneuvering, turmoil, chaos and cancellations.” Though she was supportive of the rally itself, she was not supportive of the way the city dealt with the rally.

Hollister Downtown Association development coordinator and Farmers’ Market manager Corey Shaffer said during the May 16 meeting that because she used to be a vendor at the market and knows most of the business owners downtown, she felt confident about revamping it so it would be successful for vendors and retailers alike. The first thing she did was to make sure the street vendors didn’t block the fronts of retail businesses. Jack Barbieri, owner of Hollister House Bar and Grill, said Shaffer had done more than anyone else to change the “us against them” perception among retailers and vendors.

“This is just business,” Barbieri said. “HDA needs to listen to business owners more than what they have been because we’re the ones with skin in the game. Business owners get really creative when it’s their money on the line.”

Shaffer said she wants retailers to focus on their businesses while she takes their ideas and makes the Farmers’ Market work on bringing people downtown.

“By working together in intelligent conversations rather than playing the blame game, we can make it work,” she said.