Hospital officials say they have a plan to provide patient care in the case of a strike; the two sides have held 23 negotiating sessions over 14 months 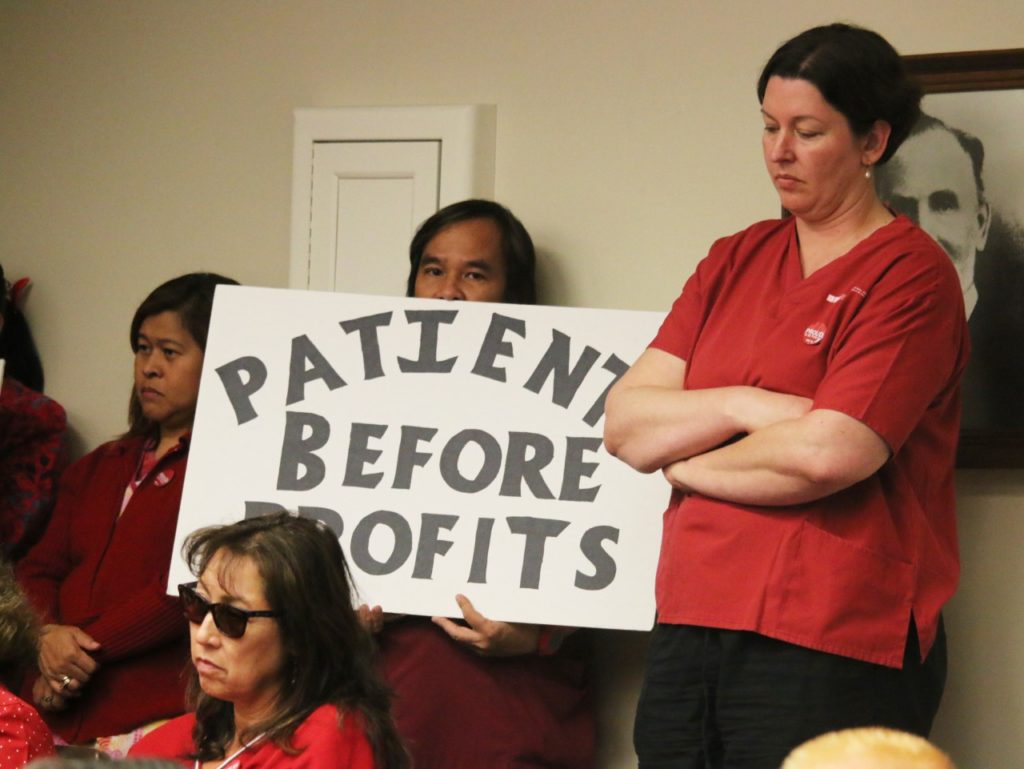 On April 18, dozens of registered nurses spoke to the Hollister City Council in an attempt to gain support for negotiations between Hazel Hawkins Memorial Hospital and the California Nurses’ Association — which was claiming staffing practices at the community hospital were endangering patients while financially benefiting executives.

At that time, Courtney Parinello, an emergency room registered nurse (RN), said the union was attempting to reach a fair contract.

“We’re not asking for anything except for safe patient conditions,” she said.

The nurses claimed then they did not want to strike, but apparently that has changed over the past five months, when the union announced in an Aug. 8 press release that it was calling for a one-day strike on Aug. 24. The strike would affect 120 registered nurses who work at the hospital that serves residents of the San Benito County Health District. The district also includes two skilled nursing facilities, home health care and several clinics.

Parrinello said the union called for the strike because, “…the board of directors and upper management have refused to address our concerns about the safety and quality of patient care at the community hospital.

“As an emergency room charge nurse, I am used to life-and-death situations,” she said. “But working this short-staffed is an unacceptable and completely avoidable condition that, as a registered nurse, I cannot accept.”

Parrinello claimed that instead of investing in retention and recruitment of experienced staff to solve what she called the serious under-staffing of nurses and other caregivers, top executives at the hospital have spent more than $1 million of public funds to hire one of the largest law firms in the nation to advise them on how to slash nursing practice protections that support safe care.

According to nurses, rather than hire adequate permanent staff, Hazel Hawkins management often asks them to work two, four, or six hours beyond their normal 12-hour shift. The union claims nurses are then required to work their next shift with less than a 12-hour rest period in between. More recently, the union said, management also turned to the hiring of temporary nurses as a stopgap.

In April, Gordon Machado, president of the hospital district's board of trustees, said the hospital meets or exceeds all state staffing requirements. He told BenitoLink again on Aug. 15 that the nurses work overtime by choice. He reiterated that the hospital does not have a staffing problem, that there is no mandated overtime, and that the nurses make the choice to work or not on a seniority basis.

Despite the union’s claim that on June 26 hospital executives made what they called their “last, best and final offer,” and declared an impasse, Jeannie Kraml, an RN who has worked at the hospital for 25 years, said on Aug. 15 that there were ongoing negotiations taking place that day and they would continue into the next. Though she is part of the bargaining team, she was not in the meeting and could not comment on what was taking place behind closed doors.

She did say, though, that the hospital executives were distorting the public message when they continued to emphasize how much the nurses were being paid, rather than addressing patient care and safety — the real issue, according to Kraml.

“The hospital doesn’t want to acknowledge that they have a short-staffing problem,” she said. “They keep talking about wages, but the problem is staffing.”

Frankie Gallagher, director of marketing and public relations at the hospital, wrote in an email about the bargaining: “This strike is not about quality or adequate staffing, but about issues having to deal with compensation. The hospital has never been cited for unsafe patient staffing issues, nor has any complaint investigated by State Licensing ever been validated, and I can assure you that we have not made any proposals to reduce staffing as we strictly adhere to the State-mandated staffing ratios.”

Gallagher pointed out that “The hospital is offering a competitive wage package that is putting our nurses in the 90th percentile of average pay for nurses in Northern California and CNA has not agreed to accept that entire wage package. The proposal is well within industry standards and these pay practices are in place at neighboring hospitals. The wage increase offered is on top of the current annual average salary of $145,288, not including standby, callback pay, overtime, etc.”

Kraml said what the nurses want is a fair contract that helps promote retention and recruitment. She said the union wants to keep the “brightest and the best” nurses at the hospital.

“We want good nurses here taking care of our community,” she said. “They also need to hire more nurses and stop taking away their recruitment protections, such as working 12 hours with no rest. I have worked 16 and even 20 hours, and then I come back six hours later for another 12- to 16-hour shift. I’ve done that four times in a row.”

Kraml said staffing is insufficient to protect patients, and contrary to what Machado claimed, the nurses do not want to work the long hours. She said, out of a sense of duty, they will come in to work overtime if absolutely needed.

“We will do what we need to do to keep our patients safe,” she said. “I don’t see why the hospital would want to do this, why they would want to hurt patient care, and take away from their nurses who have given many years of loyal care.”

Kraml couldn’t say how many nurses would actually be on the strike line, but she said 96 voted for the strike.

She said the hospital makes no effort to retain or recruit qualified nurses, but continues to bring in temporary nurses.  She said the temps are actually more expensive, their training and capabilities are unknowns, and they have no connection to the community or the patients.

Gallagher responded: “Most hospitals across the country use travelers to fill in for peak volume periods and to staff open shifts.”

The union press release stated that the RNs are keenly aware of how important it is for nurses to get adequate rest, without which medical errors are more likely to occur and infection rates of patients increase.

“As public sector nurses, we are legally and ethically bound to protect our patients," Parrinello said. “Hazel Hawkins management routinely and dangerously staffs our nurses on a ‘just-in-time,’ or skeleton-crew model, putting patients at serious risk.

“Poor staffing, unsafe working conditions, and management’s threats to cut protections will put our patients in harm’s way, open nurses up to already exploitative staffing methods, and make it impossible to retain and recruit qualified nurses. Our patients in Hollister and surrounding San Benito County are our neighbors, friends and family. We see them in the grocery store, the post office, and at church. It is unthinkable that as registered nurses we would remain silent when we know their safety is at risk.”

“It was mind-boggling,” said Elizabeth VonUrff, RN, and member of the negotiating team. “We never stopped bargaining in good faith, but suddenly we were witnessing management and their high-powered law firm employing legal tactics to take away nurses’ voice at the negotiating table. That left us no choice but to call for a strike vote and stand as one to protect our patients and community.”

During the strike, if it occurs, the union said the nurses will have a Patient Care Protection Task Force available to respond in an emergency situation. The RNs will evaluate such emergencies on a case-by-case basis and take necessary measures to keep their patients safe. Meanwhile, Hazel Hawkins Memorial Hospital management has received 14 days advance notice from CNA to postpone elective surgeries, transfer out any patients as needed, and make other necessary preparations.

In its own Aug. 11 press release, the hospital acknowledged that after 14 months and 23 negotiation sessions, it had received notice of the pending nurses’ strike.

“Unfortunately, even after meeting with a state-appointed mediator, we are at an impasse in the negotiation process,” said Ken Underwood, CEO, in the release.

The release went on to claim that the hospital has established and maintained positive relations with all of its five unions and has not had a strike in more than 30 years.

“We are disappointed by this action and believe a strike is not in anyone's best interest – our patients, our staff, or our community,” CEO Ken Underwood said.  “The hospital has activated a Strike Incident Command Center and initiated a plan to manage the strike, including contracting for experienced temporary nurses through a highly reputable agency, who will work alongside HHMH nurses who choose to continue working during the strike.”

The top priority for the hospital, the release stated, continues to be the delivery of safe, quality care for its patients. "The hospital is well prepared with a comprehensive strike plan, and we will not compromise the quality of our care. There will be no changes in the delivery of our services at any of our locations during the strike."

Gallagher’s response concerning the meeting on Aug. 15 was: “We did not receive a response from CNA after Monday’s mediation session.  We presented CNA with an updated proposal with the expectation of a response by 5:30 p.m. on Tuesday, August 16, and we have not heard back from them.”