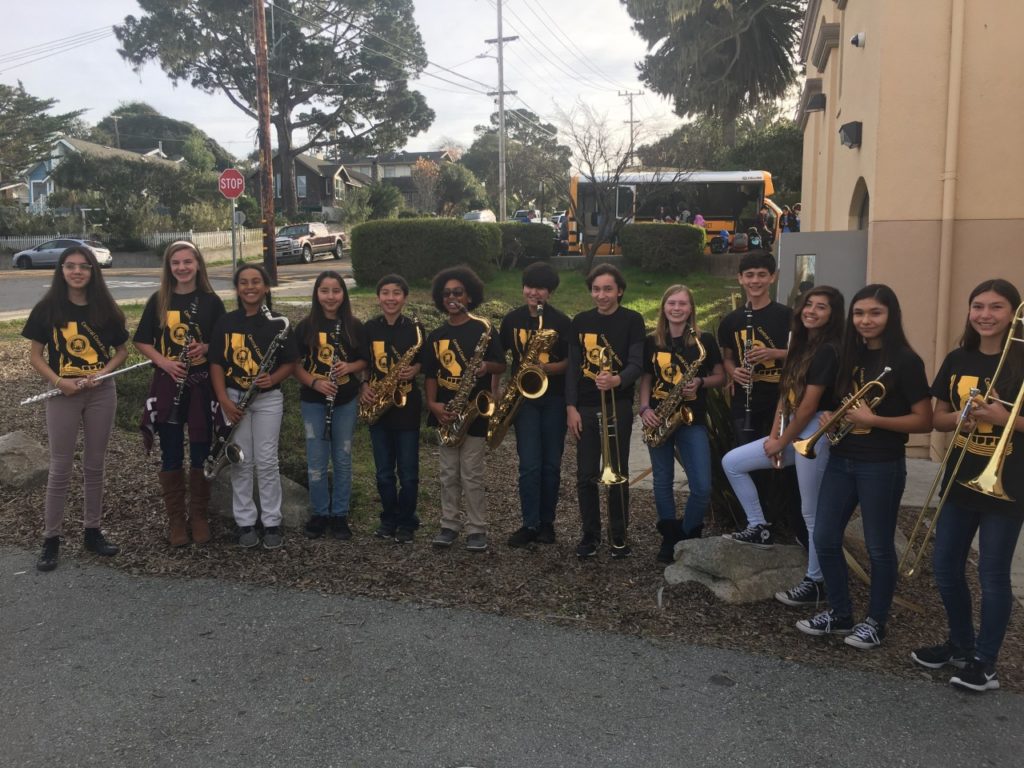 This article was contributed by community member and parent Kevin Stopper.

Let it be known that our own Hollister middle school musicians are on the rise! With the help from our local Hollister Elementary School District Music Department teachers Daniel Zeff and Susan Silviera, we have a great group of up and coming musicians among us here in our local area. In the past three years, we have slowly increased our middle school level attendance at the annual CCS CMEA Regional Honor Band performances in Santa Cruz and Pacific Grove from three students to now 14 this year. All these students worked very hard by individually auditioning and submitting taped performances to be evaluated by the California Music Education Association (CMEA) board in order to make the Honor Band. Once selected, students endured a rigorous 12 hours over three days of rehearsal with musicians they did not know at first, but soon became to know very well. It is essentially the CCS All Star Team of Middle School Bands for the Central Coast Section of schools from Santa Cruz down through San Luis Obispo.

The concert this year was again in Pacific Grove at The Performing Arts Center on Jan. 19 and directed by Teri Musiel who is one of four music directors at Dougherty Valley High School in San Ramon, where she teaches four levels of concert band and jazz band. Ms. Musiel is a well accredited Bachelor’s degree teacher in music education that has been with the San Ramon Valley district for 23 years and has grown the music program from it’s infancy of less than 80 music students to now over 750 currently. The bands have made trips to L.A. Canada, Hawaii, Boston, and most recently performed at Carnegie Hall in New York.

In addition to the regional performance this year, four students also auditioned for the state level. Two students, Dylan Freitas and Yuvia Padilla (both from Rancho San Justo Middle School), were chosen to attend the California All-State Music Education Conference State Honor Band performance on Feb. 17 in Fresno. They spent three days in Fresno preparing for the concert before finally playing on Sunday for a packed house at the downtown Saroyan Theatre. Congratulations to Dylan and Yuvia for this great accomplishment!

All these students worked hard to accomplish these great achievements that mostly go unknown in the community. They all worked hard into the late evening hours to perfect their tryout recordings during tryout week, some until 11 p.m.! It’s about time that the musical arts get the accolades it deserves and that we recognize that there are things for our kids to do in this area, and music is one of them! We have the resources inside and outside of our schools right now. There are the school programs as well as the local private teachers such as Mr. O’s Music Academy and others that are ready to help. The next time you or your child says, “I’m bored,” try picking them up an instrument, taking them to a piano lesson, handing them a harmonica or even just a simple triangle. It will make them feel good, feel accomplished. Studies have shown that music can even help children with better school grades! When you listen to these advanced sixth, seventh and eighth grade students play in concerts like this, you can close your eyes and you would never know you were listening to a middle school band. That’s how good they are! Try it, and then practice, practice, practice. Just like sports, you might like it. Music is good for the mind, and the soul!