At only 17 years old, Enz saw the sky as a challenge she had to conquer. 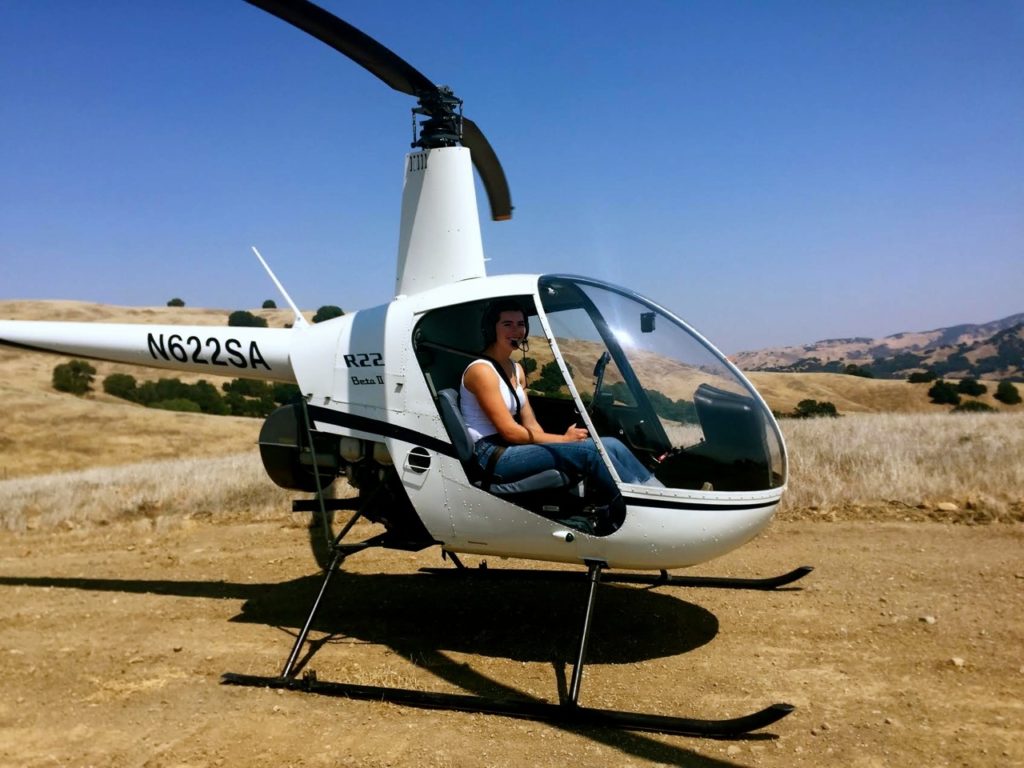 Enz in the helicopter she is licensed to fly. Photos provided by Mikael Enz. Mikael Enz, 21 years old and an accomplished airplane and helicopter pilot, lives in the middle ground between San Juan Bautista and Aromas.

Her path to the sky began when she was 17 years old and a Junior at Anzar High School. Enz decided to earn her airplane license “on the side,” as she put it, in addition to her academic studies.

Enz also participated in rodeo for District 4 throughout her high school career, but she still found herself drawn to the sky. “I thought it sounded like something that I wanted to do,” she said. She had some of her own money saved up, from selling pigs and sheep in a youth auction for 4-H, so she used her personal savings to get her private pilot’s license.

“I just wanted to be able to say that I had my pilot’s license… and it was a challenge and a goal.”

She flew a couple times a week in fair weather, and in about six months, earned her license. She was able to privately fly any single engine land airplane, such as a Cessna 172, which Enz says are “pretty small with a little piston engine.”

After graduating from Anzar, she went to Cuesta College in San Luis Obispo, but Enz says that “it didn’t really work out that well.” She went to Cuesta for about a year and a half but “[she] wasn’t very driven when [she] went down there,” and ended up back in Hollister.

She started training to fly helicopters in June 2016. Enz first became interested in helicopters when her boss at the time told her that, “[she] could gather cattle with helicopters.” The process of gathering cattle with a helicopter is called “mustering,” according to Enz. The helicopters in the sky typically work in coordination with people on the ground to more easily round up cattle scattered across a large piece of rugged terrain.

Enz says she “thought that [mustering] sounded pretty cool.” She had already been riding horses and helping with cow work on her boss’s ranch, and though Enz “hadn’t really been planning on going back to school,” her boss encouraged her. Enz decided to give helicopter pilot’s training a try.

She did a 30-minute introduction flight, where students actually put their hands on the helicopter controls and fly the aircraft. “And I liked it,” Enz said.

Enz is now working to become a helicopter flight instructor, which means lots of lesson planning and coursework. But it’s worth it.

“Hopefully I’ll be flying to make money as a job, as a career, as a flight instructor,” she said.

After she spends a few years as a flight instructor, Enz plans to work for a tour company as a helicopter pilot. One day, she could even work as a “utility pilot” for companies like PG&E. She could also work for EMS [Emergency Medical Services], or even as a pilot battling fires.

Enz admits that she is a bit of “a poor long term planner,” but she says that “utility would be fun…  it seems like there is a job that needs to be accomplished.”

She also says that being a utility pilot “just seems like a new challenge,” something Enz cannot resist.