Beginning on Sunday, June 18 and running through Sept. 30, an exhibition by award-winning photographic artist, Craig Alan Huber, will be presented at the mission 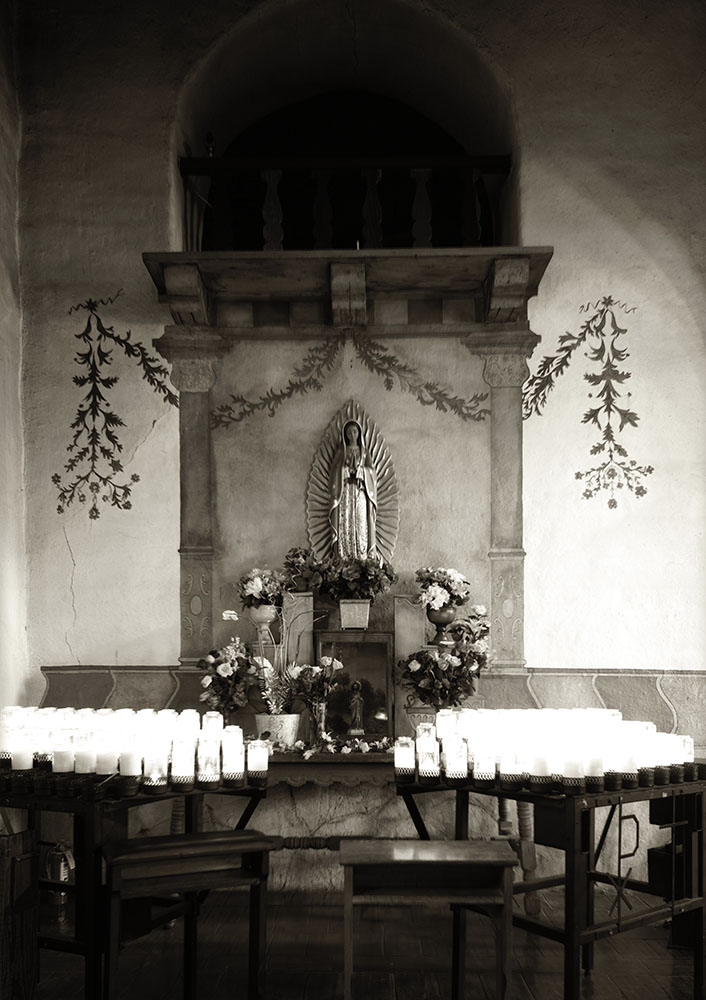 When Craig Alan Huber steadied his 5-by-7-inch view camera while visiting Mission San Juan Bautista in 2013, he captured objects whose essence spoke to him. Illuminated by dozens of votive candles, the Virgin of Guadalupe statue at the rear of the mission’s nave called Huber’s attention. He spent hours there, visualizing every element of the photo from its arrangement to its negative to its printed form.

Beginning on Sun., June 18 and running through Sat., Sept. 30, the public will have the opportunity to view Huber’s platinum/pallium photo of the statue in the mission’s museum. The image is one of 15 by Huber featured in an exhibition titled, “Saint Junípero Serra: The Spirit of Journey, Historic-Process Photographic Prints in Platinum and Silver.”

In a telephone interview with BenitoLink, the Washington state-based photographic artistic explained that ahead of Serra’s canonization in 2015 his publishing company, Veritas Editions, produced “The Spirit Within Saint Junípero,” a limited edition, trade press book containing 101 plates based on Huber’s work in Mallorca, Spain, Sierra Gorda, Mexico, and California—the three locations touched by Serra’s life, missionary work, and legacy.

“I wanted to represent that history visually,” Huber said about his book on Serra.

A self-described spiritualist, Huber has visited each of California’s twenty-one missions, typically spending an entire day listening for sounds in quietude, then setting the feet to his tripod in a way that grounds the moment, and finally adjusting his camera’s aperture before creating an image that he has pictured before it is matted and framed.

“Physical objects speak to me,” he said, adding, “they say ‘notice me, look at at how resplendent I am,'."

Returning to his darkroom, Huber begins the process of manifesting “the Spirit” of the statues, baptismal fronts, and crosses that he has photographed, often using a combination of platinum and palladium.

The mixture, he stated, produces a print that “feels more organic, like the wood and adobe of the mission’s architecture.”

Huber explained that San Juan’s parish priest, Father Alberto Cabrera, thumbed his way through “The Spirit Within Saint Junípero,” choosing the 15 prints that will be displayed in the upcoming exhibition, including four featuring Mission San Juan Bautista.

The photo of the Virgin of Guadalupe statue standing above rows of white candles and two, padded kneelers is among those that Fr. Cabrera has selected.

It also happens to be among Huber’s top 10, quite a distinction when one considers that the photographic artist—who has been called by some, "the Ansel Adams of the California Missions"—is credited with hundreds that have appeared in several award-winning exhibitions.

Titled, “Power in Prayer,” the platinum/palladium print captures “the strength of prayer and belief,” said Huber.

California Missions Coordinator for the Monterey Diocese, Jewel Yahut Gentry, stated in his telephone interview with BenitoLink that, “Saint Junípero Serra: The Spirit of Journey, Historic-Process Photographic Prints in Platinum and Silver,” is an effort to “bring more awareness to the [San Juan] mission.”

He added that the exhibition’s soft opening was timed to coincide with the return of the mission’s fiesta celebration and the San Juan Bautista State Historic Park’s annual “Early Days” event, which are both scheduled over the weekend.

In his interview, Huber said that the San Juan Mission will be the first in the Monterey Diocese to host his work in a formal setting.

And for the duration of the exhibition, the book that served as its inspiration will be on sale at a discounted price in the mission’s gift shop. Regularly sold for $75, “The Spirit Within Saint Junípero,” will be available for $45. Huber has agreed to donate a percentage of its sales back to the gift shop.

On Sat., July 1, the Feast Day of Saint Junípero Serra, the mission museum is hosting an artist reception from 4-6 p.m.

“I’ll be there to explain my work and its message,” Huber said about his return trip to San Juan.