The mission is home to the only known, complete apostolado--a series of individual paintings of the apostles--in California's mission system. 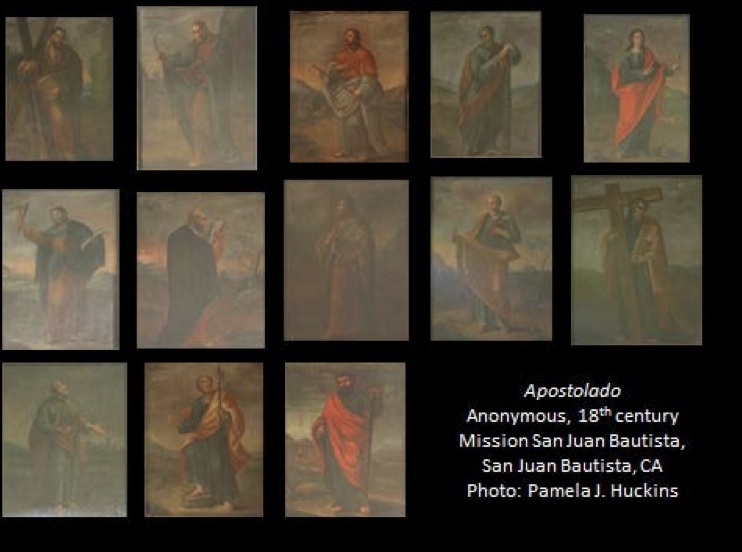 For nearly two centuries they’ve called the inside of Mission San Juan Bautista home. They stand feet from each other, separated by whitewashed adobe walls. Two shoulder crosses, four steady themselves with staffs, five clutch Bibles, one looks plaintively towards the sky, and another, the mission’s namesake, holds a chalice in his right hand. Thirteen in all, they comprise an apostolado, a series of individual paintings of the apostles. Modeled after the works of renowned Spanish painter, Francisco de Zurbarán, they represent the only known complete apostolado in California’s mission system.

Like an artist’s palette, Dr. Huckins’ presentation, “Iconographic Sources of the San Juan Bautista Apostolado: From Spain to Mexico to Baja and Alta California," blended art, religion, and colonial history with a touch of detective work.

From his workshop in Seville, Spain, 17th Century Baroque painter, Francisco de Zurbarán (pronounced, Zur-baran) gained famed while completing commissions for various religious orders throughout the country, according to Dr. Huckins. Depictions of a crucified Jesus Christ , a hooded monk in prayer on his knees, or the Virgin Mary as a child were often figures that filled his canvas.

By 1640, his popularity waned. Seeking opportunity, Zurbarán turned his attention to the New World, where Spain’s dominion in the Americas provided new markets.

Soon, he and his assistants were churning out sets of paintings for sale, including apostolados. Seminaries and other religious institutions became Zurbarán’s most important source of revenue.

As artistic expression melded with mass production, Zurbarán relied on a system that made replicating images easier. “He used four dozen poses," Dr. Huckins stated of the Spanish artists’ repertoire when painting religious figures in his collections.

It’s common knowledge that there were 12 Apostles. Dr. Huckins, who holds a master’s degree from Yale University Divinity School, explained in an interview with BenitoLink that in theological circles they’re often referred to as the Apostles of the Jews, evangelizing in the years immediately following Jesus’ resurrection, according to Biblical scripture. She added that most people leave Paul—the Apostle of the Gentiles—out to the original dozen.

But he always appeared in an apostolado, including the one in Mission San Juan Bautista, where his image hangs near the church’s main entrance.

An expert on California mission art, Dr. Huckins noted artists’ workshops in Mexico City generally produced the artwork that made its way into California’s missions. But sometimes it came from other places, including Spain.

Early on, mission budgets didn’t allocate funds for art, as Franciscan friars penned their ledgers with purchases of corn, cattle, and sheep—vital provisions needed to feed and clothe themselves and their spiritual base, the mission Indians.

An apostolado served two purposes for California’s missions, according to Dr. Huckins. First, it provided inspiration for mission priests, who, like the Apostles before them, went proselytizing into strange lands among peoples’ whose religious convictions often resulted in clashes, conflict, and even martyrdom, as in the case of St. Paul.

Second, the apostolado created an atmosphere among congregants in the nave that the individuals decorating the walls of the mission church were their equals, each sharing the same physical and spiritual space before God.

Though the record makes no mention as to who created the paintings or where they originated, Dr. Huckins is convinced, after years of research, that the set was modeled after those mass produced in Franscisco de Zurbarán’s workshop. "Both stylistically and chromatically (i.e., in the appearance of colors), the paintings resemble some in the Seminario Arquidiocesano in Chihuahua, Mexico," she wrote in an email to BenitoLink.

Those at  missions Capistrano and La Purisma have since been lost to history, making San Juan’s the only known surviving, painted collection.

Time has taken its toll on Mission San Juan Bautista’s apostolado. Almost 200 years of grime, dust, sunlight, and other elements have obfuscated images on the paintings, evident by the ominous gray clouds that seem gathering around each subject.

However hope could be on the horizon, especially if preservationist and conservationist efforts are set in motion.

Professor Huckins stressed the importance of getting the paintings into the lab, where they can receive the care and attention they deserve and where questions as to their creator and origins could be ascertained. But she cautioned that costs associated with such an endeavor can easily reach tens of thousands of dollars for a single painting.

She added that “stretchers [the wooden frame holding the canvas], nails [used to fasten the canvas to stretchers], and pigments” can provide a wealth of information, noting that the “ground [primer] used in Mexico was red and in Spain it was white.”

Despite what has yet to be learned from Mission San Juan Bautista's apostolado, one thing is certain: gracing the mission's walls are 13 individuals who, when added together, equal a historically significant artwork.