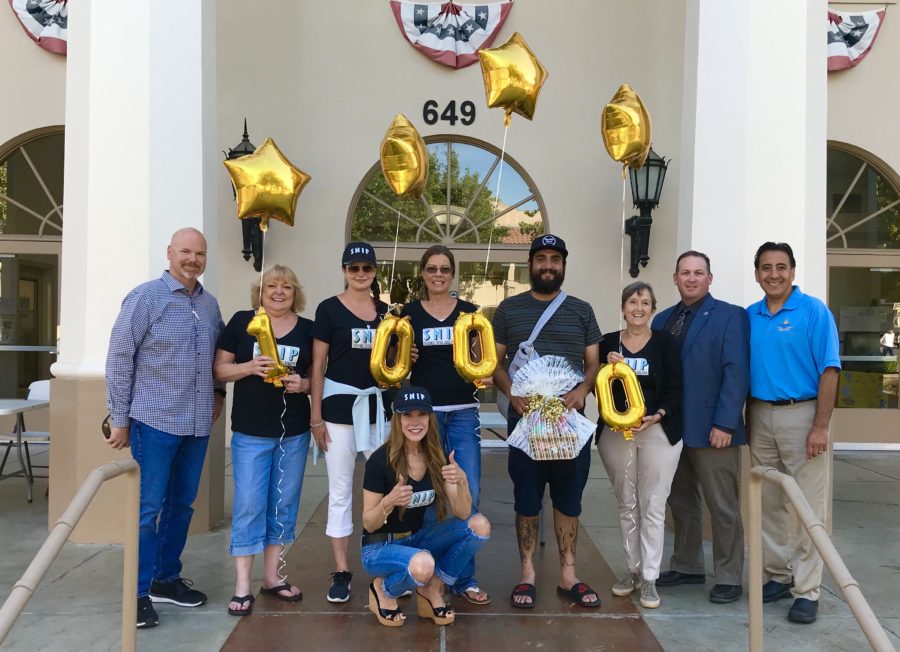 On Aug. 27, the SNIP Bus Mobile Spay and Neuter Clinic celebrated its 1,000th animal to be fixed in Hollister since its first local clinic last December.

Adrian Sanchez’s dog Diesel 10 was the lucky animal, and littermate Bella was right behind him at 1,001. SNIP is made possible through a combination of city funding and private donations, and the celebration was the culmination of hours of volunteering, advocacy and fundraising.

When Sanchez’s elderly friend suffered a stroke, the friend’s dog escaped and had three litters of puppies. Sanchez said he spent months spaying and neutering each puppy and finding them good homes. Because of that experience, he said he knows firsthand how important it is to spay and neuter.

Hollister resident Lisa Nall Sears worked with Melissa Finley from Heading Home Animal Rescue to reach out Melanie Scherer, who after 14 years in rescue work founded SNIP Bus in June 2016 in the Coachella Valley. Sears said she worked for years with her mother, Alberta Renfrow, to rescue, spay, and neuter feral cats and stray dogs, but the need surpassed the available resources. According to Scherer, California has the second highest animal kill rates in the country, behind Texas, and local shelters are inundated with animals.

“If you start with one male and one female cat, by the end of the year, you could have 50 to 75 cats,” Sears said. “But catch and kill isn’t the answer, because if you take those cats out of the territory, it creates a vacuum and other cats move in. Because cats are territorial, if you fix them, they hold that territory, and the problem solves itself within five to 10 years. It’s exciting to have hope that we can get a grasp on this problem, because it is the only solution to overpopulation.”

Hollister has hosted 27 SNIP Bus clinics since December, Sears said. Eight of them have been feral cat days, during which the team would fix 50 cats in a single day. Scherer described their efforts as “vastly impactful” and said Hollister has already seen a 7% decrease in animal shelter intakes. She added that the kill rate has dropped from 36% to 25% so far this year.

Scherer and her husband Richard said they have never seen anything like the support Hollister has shown for the spay and neuter initiative.

“It is small towns like Hollister that truly pave the path for larger cities,” she said.

Karie Stephens is a Benito Link reporter, freelance editor, and award-winning writer. She graduated from De Anza College with an AA in English and from UC Berkeley with a BA in English and a minor in creative writing. Her passion is community engagement, especially with teenagers.