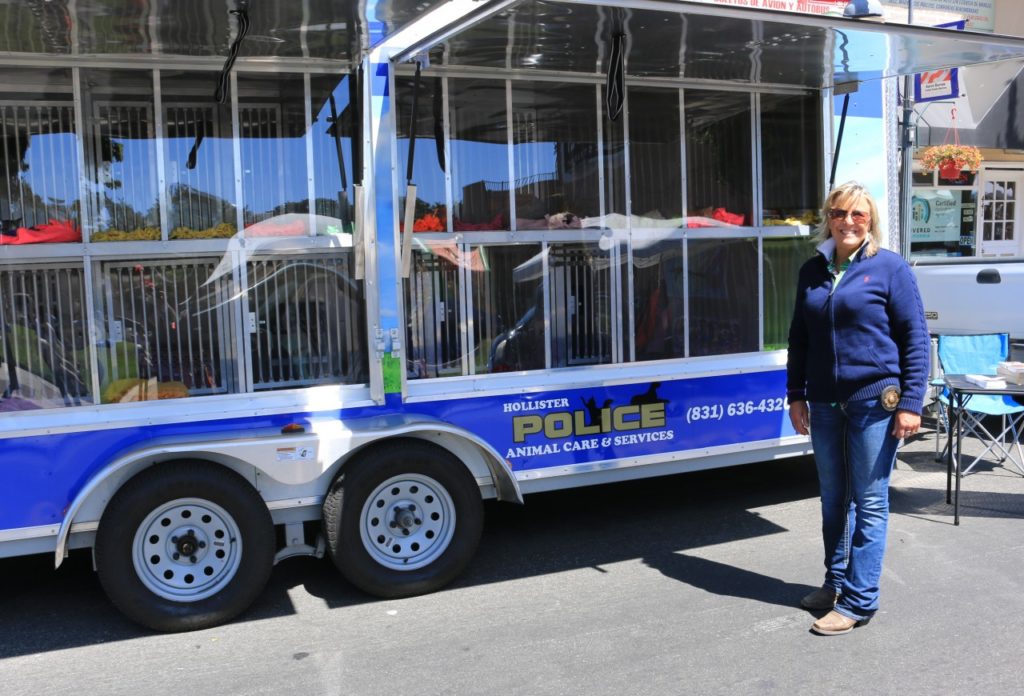 Sometimes even pets need a lift, whether it’s to escape from a dangerous area during a flood or fire, or just a ride to a community event to be offered up for adoption. In the case of Hollister, those two potential scenarios can be accomplished with one, highly customized trailer.

Katie Hartman, animal control officer at the The Hollister Police Department Animal Care & Services Bureau, 1331 South St., for the past five years, said the $32,809 trailer was funded last year through a grant secured by Hollister Chief of Police, David Westrick.

She said the shelter received the trailer a year and a half ago, but it wasn’t used until recently because of needed alterations, including sleek graphics on the exterior, which were partially done by Helen Ross. Also, there was a need to prepare a vehicle to tow the trailer.

“There was some work that needed to be done so we could take it out to the public. It didn’t arrive ready to go,” Hartman said. “We are just now bring the trailer out to public events. We also had to raise additional funds in order to get the trailer functional for events and to have the graphics added.”

The custom-made trailer was manufactured by Jones Trailer Co., in Woodland, Texas, which is near Ft. Worth. Phil Lopez towed it from Texas to Hollister.

There are 18 individual compartments that can house cats, dogs and other small animals. Some have removable dividers to allow the doubling in sized for larger animals.

“The trailer is self-contained,” Hartman said. “It has a flushing system so it can be easily cleaned. The animals have air conditioning and heating. It has its own waste system so we can wash it down and then dump it.”

The initial idea for the trailer was to use it to bring the animals directly to the public because it is often difficult for people to get to the shelter during its normal hours of noon to 5 p.m., Monday through Friday.

“We’re doing what we can to get the trailer to an event where the people are or if we can do some off-hour events we can take them there,” she said. “That will increase their ability to be seen and adopted.”

So far, there is not any particular event to which the trailer will be taken. Hartman said a lot of planning goes into preparing it and the animals to go to an off-site location.

“The build-up to an event takes a little bit of planning, man hours and even medical,” she said. “That’s something we’re working at lining up, having all of those things ready to go, including the clinic and the animals have their health check, and that way we can adopt on site.”

While the trailer is kept at the shelter, Hartman said maintenance of the trailer is funded and done by the police department. As far as routine care, she said the shelter staff will take care of filling the water tanks, taking it to have the waste tanks dumped, and cleaning.

“This is a big step our small shelter,” she said. “We haven’t had much ability to get our animals out to the public where they can be seen up close. There are a lot of people who don’t liking coming to the shelter. It’s kind of nice when they’re out in a public place and we can talk with the people, talk about responsible pet ownership. It’s a really great public service opportunity for the city and the county.”

Hollister RV donated a cover for the trailer.

“That’s awesome because we don’t have a carport here,” Hartman said.