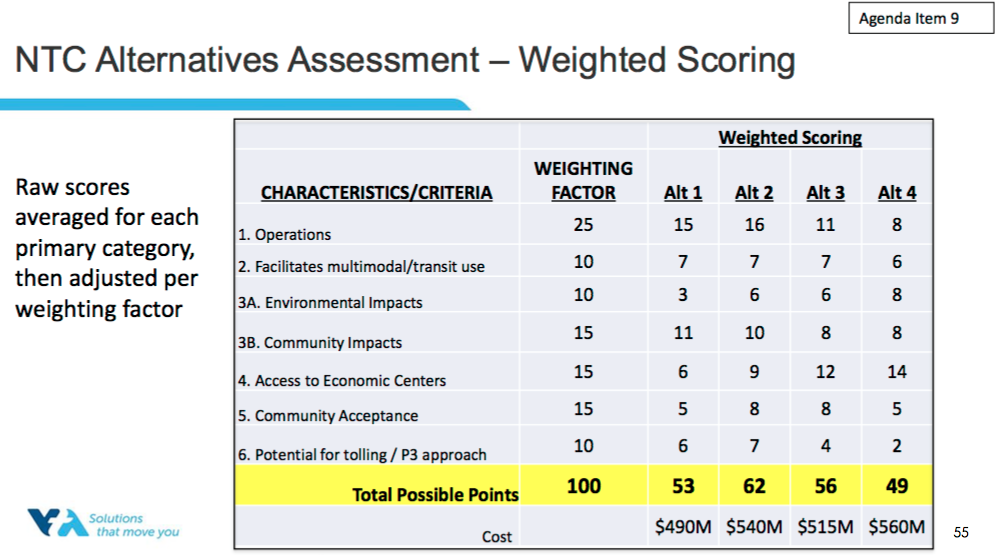 And then there were two.

The Mobility Partnership Committee of the Santa Clara Valley Transportation Authority (VTA) and the Council of San Benito County Governments (COG) narrowed down the new trade corridor project to two routes on Sept. 9. The committee unanimously voted to eliminate alternatives 1 and 4.

The eliminated routes scored the lowest in the evaluation criteria adopted in June with 53 and 49 points, respectively, out of 100. They also represented the least and most costly options, based on a preliminary estimate that only considers construction and right-of-way acquisition.

“We’ve been talking about multiple routes for many years now and we narrowed it down to just this area between these two options,” Carr said. “I’m glad we are there. We’re getting with each step a little bit closer on this.”

With 62 points, alternative 2 was among the highest scoring in four of the seven categories that include operations, multimodal (having several modes of activity), access to economic centers, community acceptance and potential for tolling.

He also noted that the routes are not definite, but an estimate of where they would be located.

COG Director and Hollister Mayor Ignacio Velazquez said he preferred alternative 3 because it was closer to commercial zoning areas and because alternative 2 affected more homes in the area.

“It’s going to make more sense with alternative 3, definitely for the future of San Benito County, to increase the growth in commercial/industrial and not inconvenience so many other property owners with their homes and crossing through those areas,” Velazquez said.

Though San Benito County Supervisor Peter Hernandez said he had hoped that alternative 4 would score the highest, he too is leaning toward alternative 3.

“Within the realm of ability, No. 3 seems to be the closest to be the best of both worlds where it allows for a commercial focus,” Hernandez said.