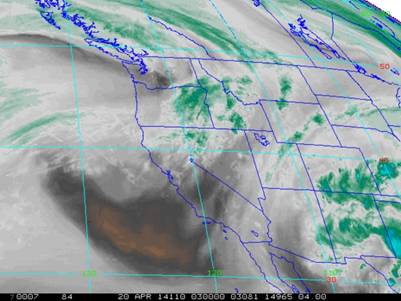 A pleasant Holiday expected for CA on Sunday, with increasing clouds and precip spreading over NOR/CENCAL on Mon/MonPM. The system will be better known for its WINDS on Tuesday rather than the amt of precip left behind.  Be Wed some SJV stations may struggle to reach 70° under fair clearing skies. Thu appears mostly fair with warming temps just as another trough and cold front move onshore late afternoon and spread rapidly southward overnight.  Friday appears stormy for NOR/CENCAL according to forecast charts with possible brief heavy precip overnight Fri followed by clearing skies on next Saturday.  With regards to the storm system late next week, the recent forecast charts have chopped the QPF’s in half as compared to the high precip totals forecast 2 days ago.  This is very unfortunate because CENCAL desperately needs the rainfall to avert a disastrous Water Supply issue, but we are thankful for whatever we are gifted with.  Week #2 is now appearing dry thru Monday, May 5th.

Sun, Apr 20th               EASTER SUNDAY  With 576dm High Pressure running thru NORCAL on a dry westerly flow pattern, expect a beautiful, warm/dry Holiday.  Overnight a trough of Low Pressure rapidly approaches the PACNW and NORCAL with an increasingly tight pressure gradient producing a stronger onshore flow.  The flow pattern across the PAC basin is becoming increasingly amplified with 2 troughs; 1) at the Dateline and 2) at 140W which is progressing eastward toward the West Coast Mon, Apr 21st              The Low Pressure trough approaches the West Coast supported with a 100kt Jet Stream moving into NORCAL by afternoon.  Although the parent cold pool is located west of the Olympics, weak vorticity manages to reach as far south as SLO to Mt Whitney by evening, spreading showers southward to Madera Co overnight. Southerly (downsloping) winds developing ahead of the storm are likely to cause SJV temps to spike in the South Valley region.  Overnight the trough axis travels into CENCAL spreading clouds and showers southward from a narrowing and weakening frontal passage. This storm’s biggest impact will be WIND! Tue, Apr 22nd               As the trough axis pivots NE into OR, a NW Jet Stream over NORCAL at 100kts advects much cooler air into CA with temp drops of -15° to as much as -20° compared to Monday!  This will be brought about by strong WINDS associated with this system.  Charts show most of the upper level dynamic energy has already past to the east overnight, leaving behind much cooler temps, scattered showers and gusty winds.  Orographics keep snows falling into the Sierra with upsloping NW winds screaming across the Crest and across the higher Mojave desert region.  Post frontal convective type showers occur throughout the SJV with Thunderstormspossible north of Modesto to Redding.  Showers gradually diminish overnight as the system pulls eastward into the northern Rockies and weak High Pressure moves onshore.  This cold air intrusion ends the 16 Day stretch of above average temps for Fresno, which included 5 days with temps of 90° or higher. Wed, Apr 23rd              A progressive weak High Pressure ridge moves over the West Coast providing fair skies over the lowlands of CEN/SOCAL and diminishing clouds and shower activity over the Sierra, while an onshore westerly flow remains focused over the CA/OR border region producing rainshowers as far south as the Russian River to Feather River basins and partly cloudy skies from Santa Cruz to near YNP.  Meanwhile further west a broad trough is developing in the PAC basin at 150W which advances east to 140W overnight with heavy rains returning to the PACNW coastal region and light rainshowers spreading over most of NORCAL and partly cloudy skies spreading southward to near Santa Maria NE into the Southern Sierra. Thu, Apr 24th               The large broad trough axis reaches 130W with the nose of a 110kt Jet Stream pointed at NORCAL, as a tightening pressure gradient develops over NORCAL with increasing onshore winds.  A narrow frontal boundary brings heavy rains into the Smith and Klamath River basins by afternoon with clouds spreading rapidly southward thru NOR/CENCAL.   Overnight as the trough axis continues to approach the CA coastline, then cold front dips southward into CENCAL running from near SFO to Tahoe with light rainshowers and clouds extend inland from near Monterey Bay eastward to Modesto, then SE into the Southern Sierra. Fri, Apr 25th                 As the trough axis moves onshore it is accompanied with the upper Jet Stream at 100kts aligned from the SW.  With increasing vort energy and the SW flow aloft this invigorates the cold front which is entering into CENCAL producing moderate rainshowers as far south as Fresno by afternoon.  Overnight as the front passes thru CENCAL it is accompanied by strong top-of-the-scale vort energy producing mod to possible briefly heavy precip over CENCAL, especially in the North Valley and into the Southern Sierra near YNP.  700mb charts show a strong cold front with excellent lift producing abundant orographics into the Sierra on the SW flow.  As the -28°C cold core moves onshore near SFO, freezing levels plummet in the Sierra. Sat, Apr 26th                As the -28°C cold core crosses the SJV during the morning it develops into a cut-off 548dm Low Pressure circulation containing top-of-the-scale vort energy.  By afternoon the center of circulation is located over the Mojave desert region with a NW flow pattern advecting cold air into NOR/CENCAL.  The timing issue with this event is a close call for the CENCAL/SJV region, because a delay of the Low Pressure center moving into the Mojave region by about 4-6 hrs would place the southern SJV squarely into a region that would be prime for Thunderstorm development.  Therefore this timeframe should be watched closely.  If the Low Pressure does move as the 0Z GFS suggests then partly cloudy skies and scattered showers should rule over NOR/CENCAL with diminishing rates as skies gradually clear from the west.  Overnight as the Low Pressure kicks east into northern AZ and southern UT, the backside NW flow pattern continues to advect cold/dry air into CA. Special Notation;   Unfortunately the GFS forecast model has backed off with the intensity, and duration regarding the late week storm system.  QPF’s have been dramatically lowered in the past 24-30hrs.  Hopefully that trend will not continue, or might reverse? There is still plenty of time for the next consecutive models to edit back into a wetter mode…optimistic!

Sun, Apr 27th shows a weak High Pressure ridge moves over CEN/SOCAL, as the westerly onshore moist flow continues into NORCAL with more rainshowers as far south as SFO to Tahoe.  Overnight the moist flow diminishes and shifts northward into OR, with partly cloudy skies left over CENCAL.

Tue, Apr 29th shows the High Pressure over the SW CONUS not only refuses to budge, but intensifies with the 582dm heights spreading northward to Malibu to Ridgecrest producing warming temps for CENCAL. At the same time, the GOA Low Pressure trough continues to approach the PACNW with a new cold front, creating a tight pressure gradient with high winds.  Overnight the ridge finally shifts eastward as the trough noses onshore into the WA/OR coast.  The trailing cold front rapidly diminishes to the west of the NORCAL coastline.

Wed, Apr 30th shows the High Pressure ridge is located over the Rockies, with the 582dm heights running from SOCAL NE into SLC, while 558dm heights are over Crescent City.  As the upper Jet Stream is retarded from moving east due to the ridge, it rapidly diminishes the strength of the Jet Stream as it moves into NORCAL, thus killing off the southern boundary of the cold front.  The pressure gradient produces a strong southerly flow pattern over NOR/CENCAL with warm temps.

Thu, May 1st shows the development of a large High Pressure ridge over the western ½ of the CONUS, which forces the trough axis to pivot NE into the WA/BC, Canada coastline as the storm track retreats into Canada.

Fri, May 2nd shows High Pressure dominant over the western ½ of the CONUS with a minor dry disturbance flowing into the ridge with some high cloudiness for the West Coast.  Once the weak disturbance reaches CA it stalls out and then digs southward into SOCAL.

Sat, May 3rd shows High Pressure nosing into BC, Canada with the downwind flow continuing to dig a trough pattern into CA, albeit a dry one.  A few clouds spread into NE CA near Alturas.

Sun, May 4th shows the dry Low Pressure trough deepening overhead CENCAL and remaining stationary.  Cooler temps with partly cloudy skies reach into the Sierra, with a few light showers possible over the Shasta basin.  Overnight a closed circulation pattern develops over the Tehachapi Mts and drops into SOCAL with a few clouds.

Mon, May 5th shows the weak/dry CA Low Pressure sags into Baja with a few showers possible over the Sierra near YNP.  With little available moisture aloft, this produces only partly cloudy skies for the SJV as clouds drift SW from the Sierra.

7 Day QPF Chart; shows a precip focal point of 1.8 inches for the northern Sierra with rapidly diminishing amts to the south, showing up to 0.5 inch for the Sierra near YNP.  Most of the SJV remains dry. Days 1-7; shows nearly 2 inches of precip into the wet spots of the northern Sierra

GFS 384hr, 16Day QPF Chart shows heavy precip reaching into the NW portion of NORCAL with up to 2.5 inches for the Smith River basin.  Amts taper off to the south, with up to 1.5 inches for the Northern Sierra and the Southern Sierra to near YNP, diminishing rapidly to the south with portions of Kern Co receiving up to 0.5 inch.  SOCAL totals range from 0.5 inch near Santa Barbara to 0.25 inch near San Diego with the deserts at >0.1 inch. Weekly Evapotranspiration rates for the local 7 Counties shows up to 1.39 inch near Merced up to 1.67 inch in western Fresno Co and up to 2.13 inch near Ridgecrest during the next 7 Days.  The Sierra Crest evaporation loss ranges from 0.86 inch in the upper Tuolumne River basin up to 1.57 inch near Isabella. Water Vapor 4KM Image of the West Coast Saturday, April 19th, 2014, shows a dome of High Pressure approaching the CA coast with an onshore flow reaching into southern OR and the far northern portion of NORCAL.

Visible Satellite Image of the CA Saturday, April 19th, 2014, shows a few high clouds crossing NORCAL with stratus near the Bay region and CU buildups into the Southern Sierra and a few clouds over SOCAL.  The SJV up into the northern SAC Valley is abundantly clear.