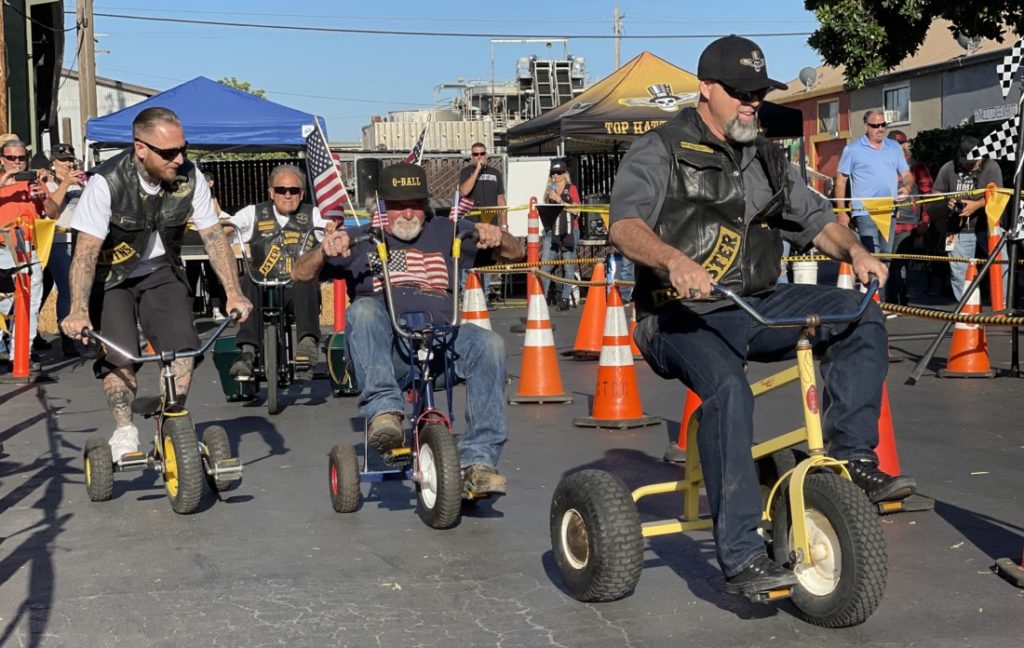 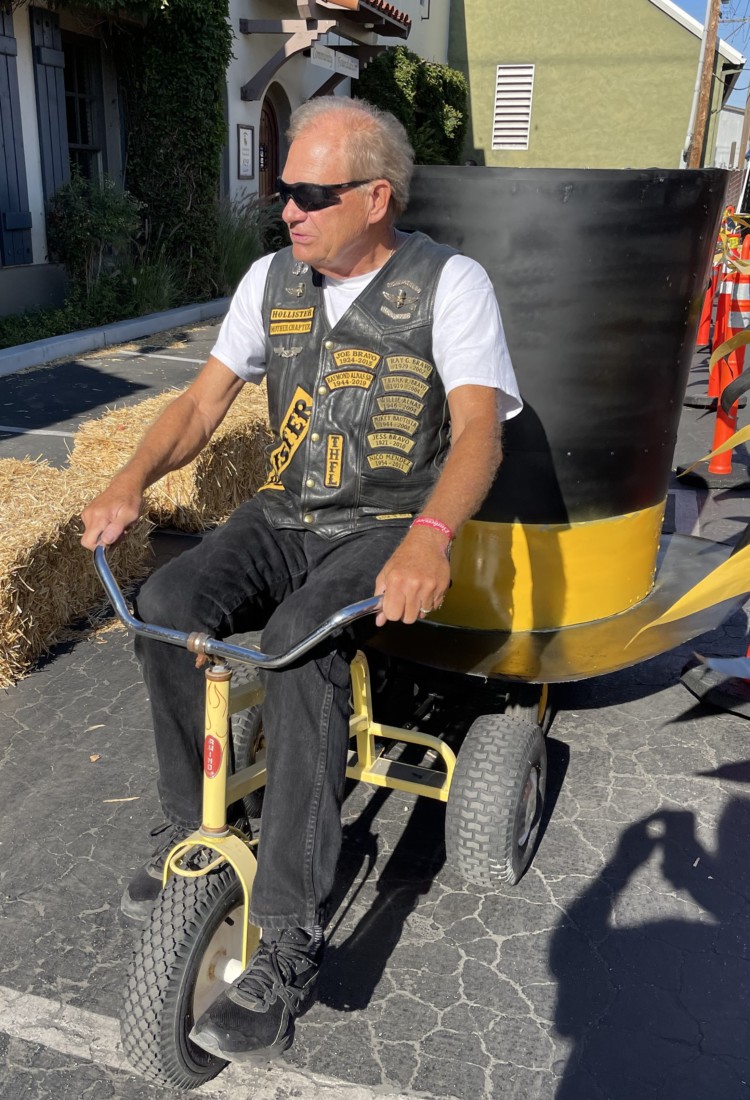 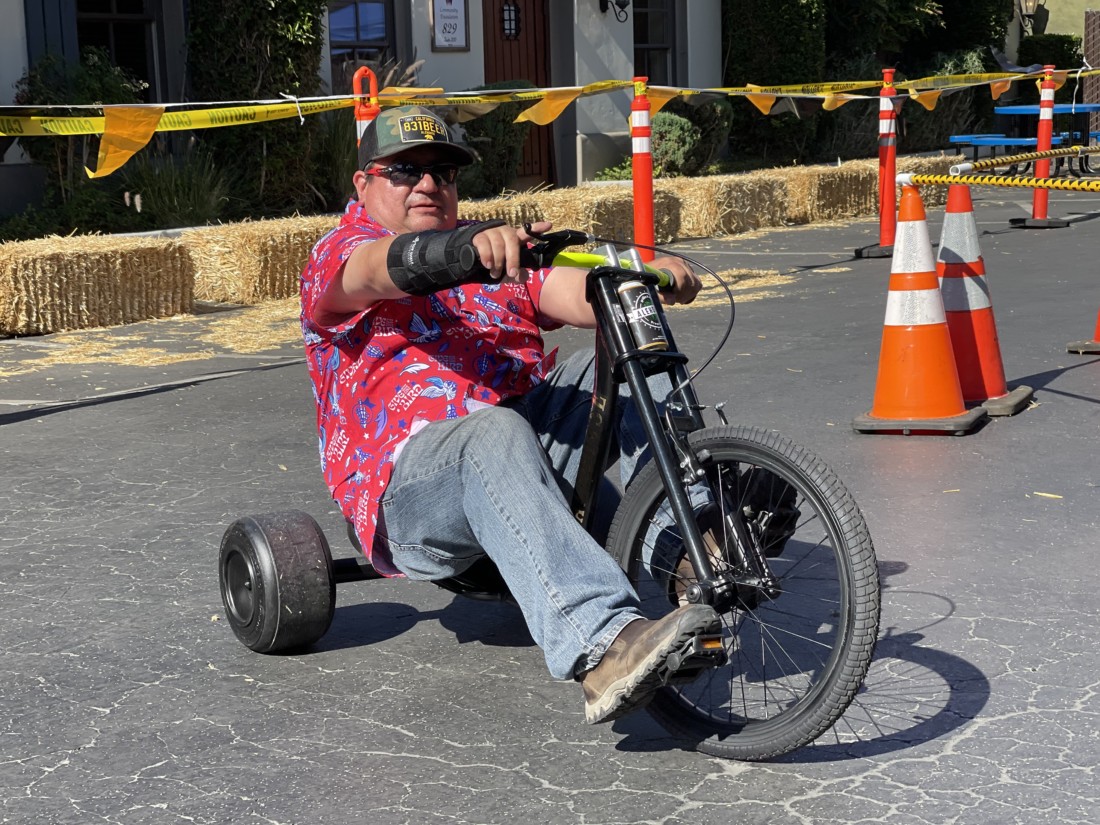 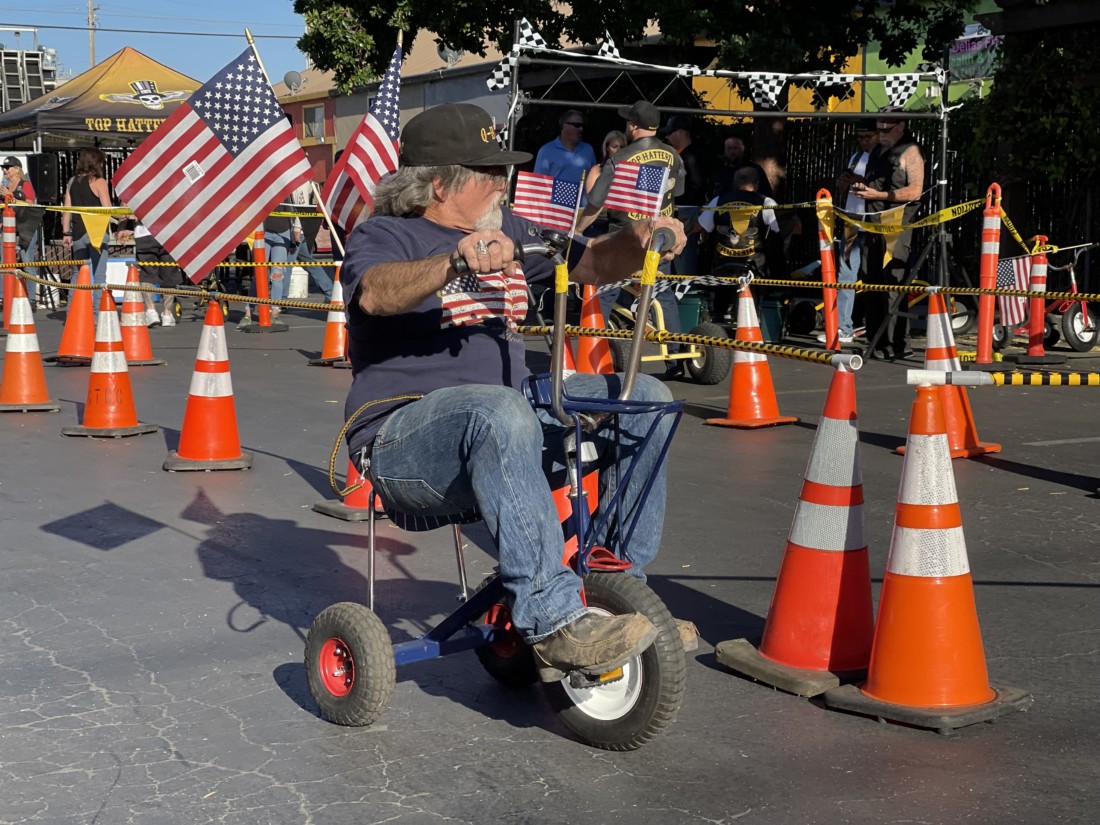 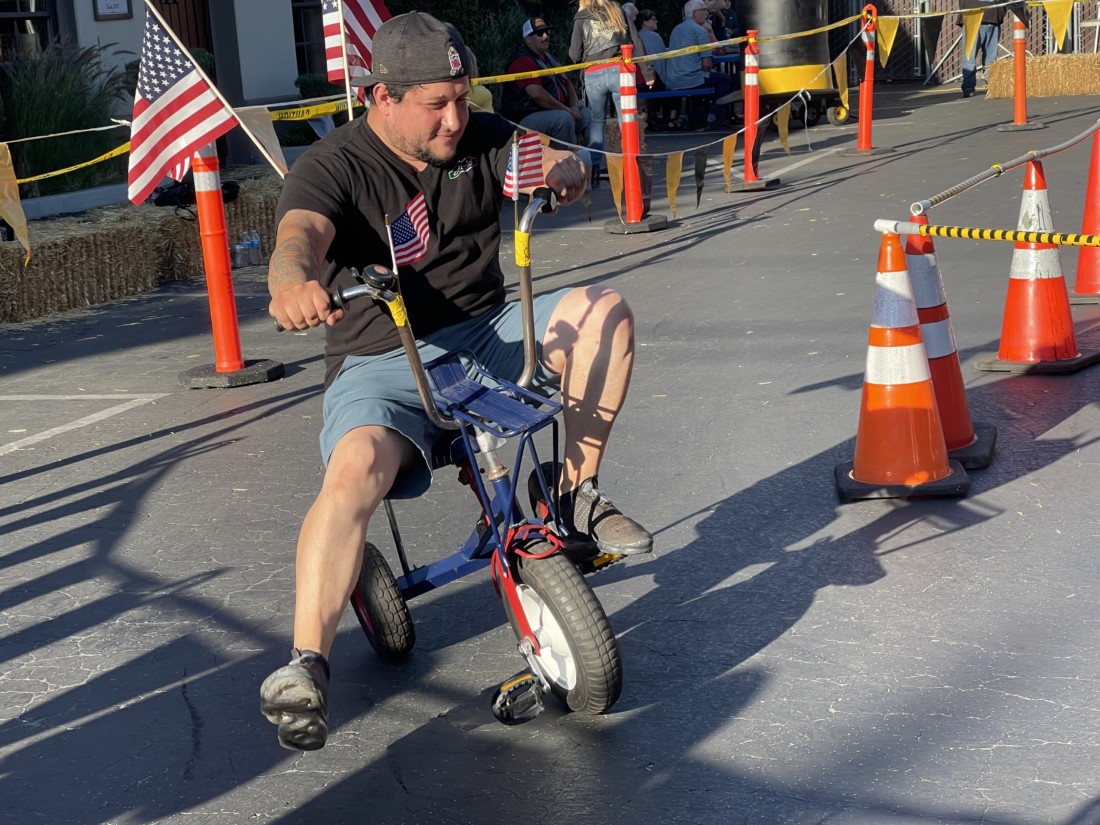 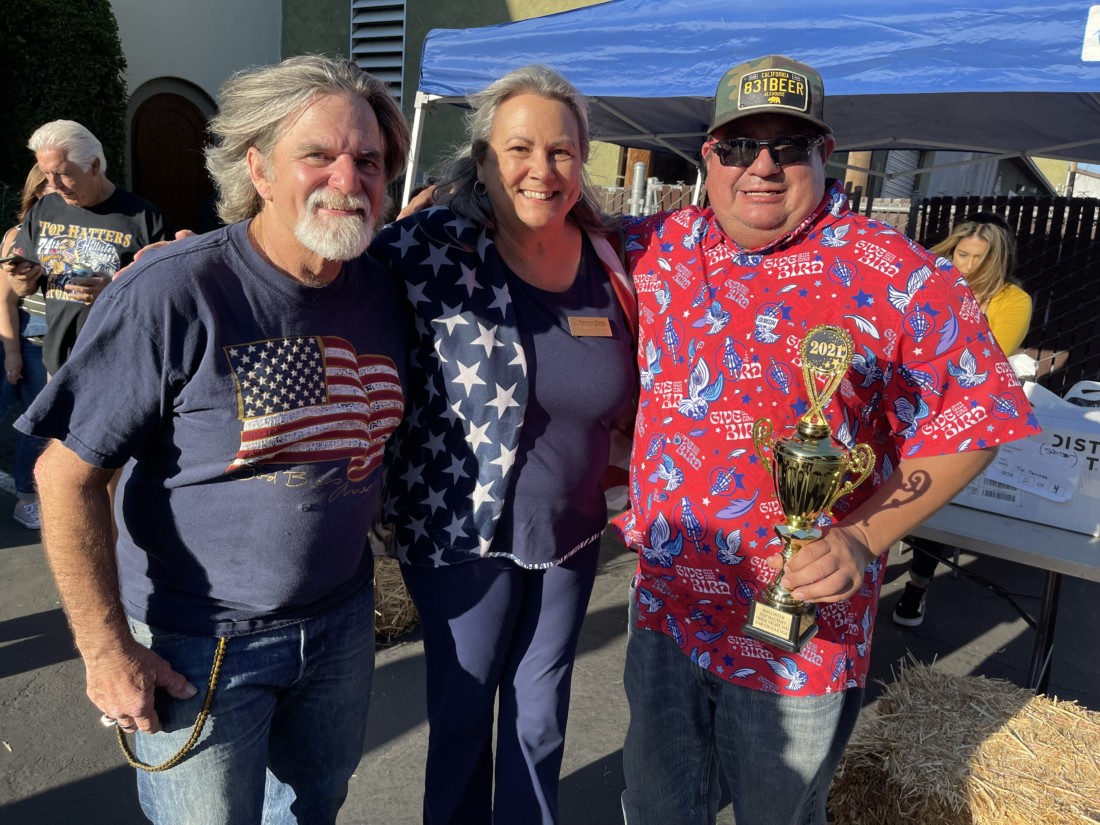 “Chuck is wounded this year,” Lago said. “He won last year and he cheated. I don’t know how, but he cheated. I am looking forward to running him into a corner.”

Frowein’s chances were indeed doubtful. But having suffered a double fracture to his wrist and a fracture to his pelvis in a boating accident on May 4 did not dim his enthusiasm.

“I have been looking forward to this for two years,” he said. “I won last time and I‘m going to win again.”

The competition took place in the Community Foundation for San Benito County parking lot at 829 San Benito Street and was sponsored by the Top Hatters Motorcycle Club as a benefit for Hollister’s Emmaus House.

“We had some tricycles up in the attic of the clubhouse,” said race organizer and Top Hatter Jim Quinley. “I thought this would be a great way to break things up and do something different. We come out here to have fun and to make fun of ourselves in the name of doing something for a good cause.”

The Top Hatters, established in 1947, is one of the oldest motorcycle clubs in the United States. They have held the tricycle races three out of the last four years. Last year’s race was canceled because of COVID restrictions. Besides raising money through this race, they visit Emmaus House every Christmas to spend time with the children there.

“We give them presents,” Quinley said. “They look forward to us being there—they love the motorcycles. Before COVID we would also come and play football with the kids after our annual 4th of July Poker Run. These kids have had a hard time and we try to bring them some happiness.”

Participants paid a $10 donation for the privilege of racing two laps around the impromptu track, with separate races for the Boozefighters Motorcycle Club, the Women of the Top Hatters, and the Top Hatters themselves.

As befits the fierce independence of motorcyclists, the races were a bit hazy in the rules, with occasional disagreements as to when a given race begins or ends and occasional acts of on-track sabotage to gain a slight advantage over the other racers.

Frowein, despite his injuries, took an early lead and hit the finish line half a lap ahead of the competition. As if in disbelief of their loss, the other riders continued circling the track while Frowein completed another three laps.

He continued circling, dodging traffic cones thrown in front of him, before finally being cornered by the other riders and forced to follow them to the finish line for the final time.

Quinley presented Frowein with a golden trophy and he accepted the accolades of the crowd.

“I felt Peter Lago breathing down my neck a couple of times,” Frowein said. “The Top Hatters always give back to the community and it’s an honor to be here. Emmaus House is a great cause and we try to do what we can to support them. What they do for women and children is incredible.”

Emmaus House Executive Director Patrice Kuerschner joined Frowein at the finish line to congratulate him and acknowledge the good works of the Top Hatters over the years.

“It is a lot of fun to come out and see these adults trying to race on these modified tricycles,” Kuerschner said. “But we rely on donations and grants, so it also helps us to fund what we do at Emmaus House. The Top Hatters have been very generous to our shelter with fundraising events like this, and the children love their visits too. They do an awesome job supporting our children and we really appreciate them.”

The final total of the donations was not immediately available, but Quinley said he believed it would exceed last year’s total of $1,500. 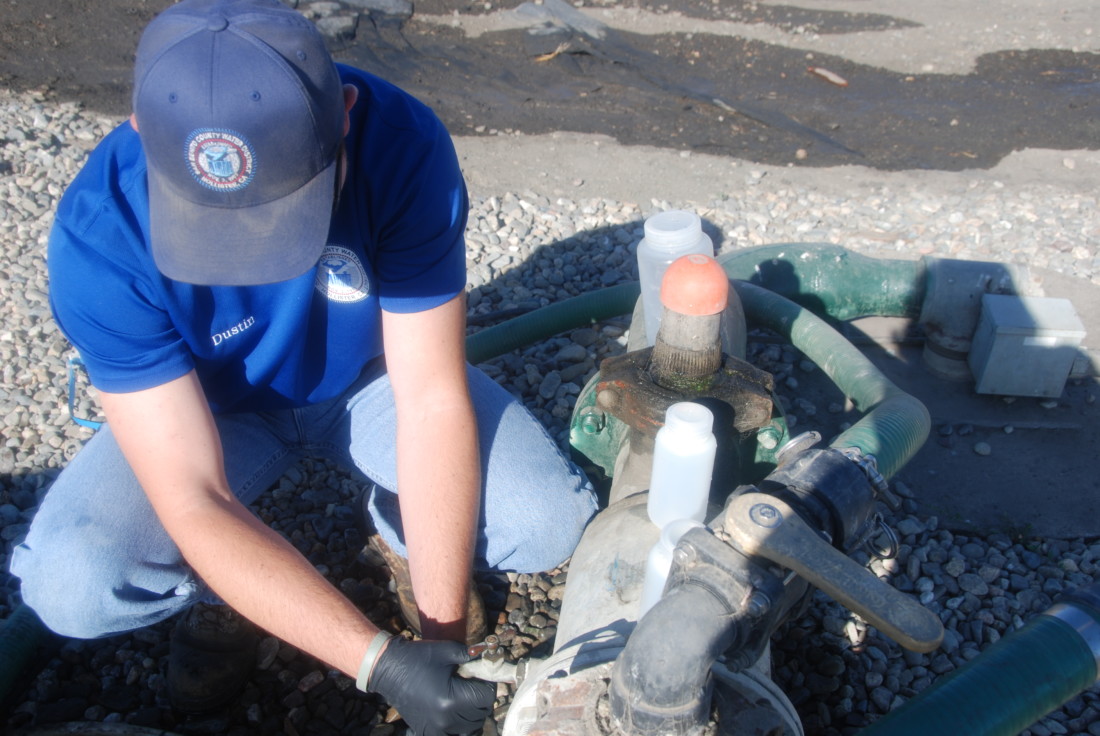 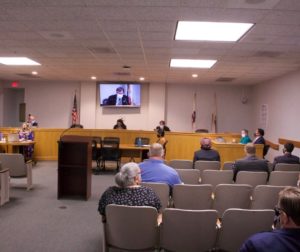 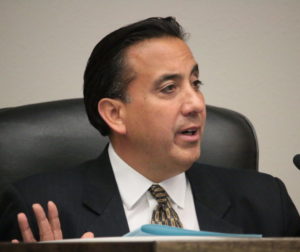