The former San Juan Bautista mayor was remembered on the Juan Bautista de Anza Historic Trail, where a monument was erected in West’s honor. 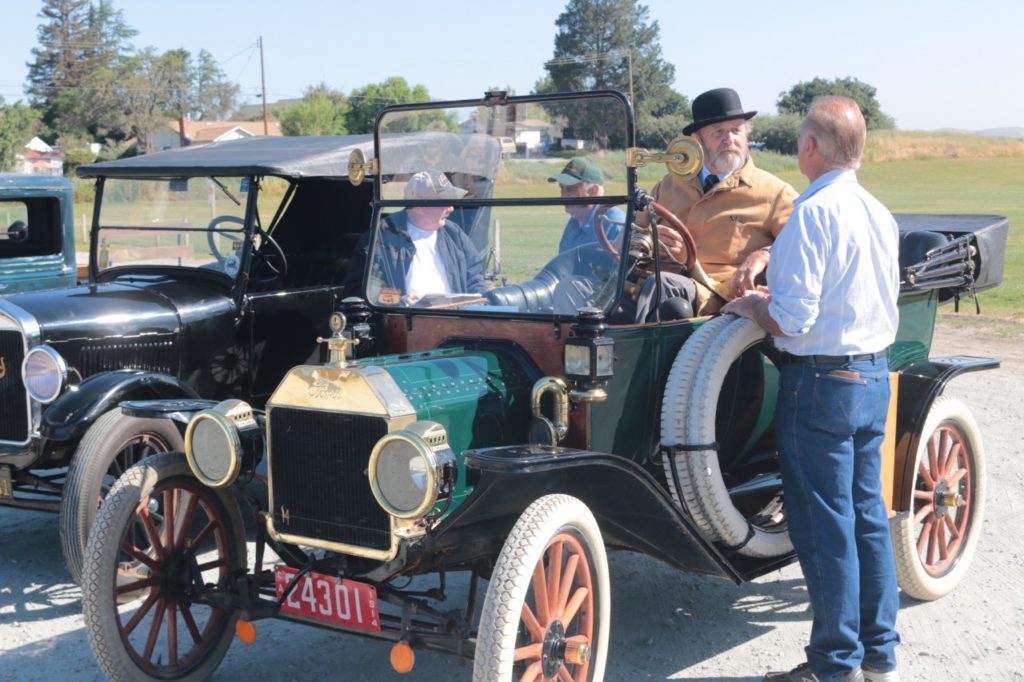 Motorists chat in the parking lot of San Juan School before heading out for the first annual Jim West Antique Auto Tour on May 11. The antique car ride took place on the Juan Bautista de Anza Historic Trail. Photos by John Chadwell. The morning of May 11 was perfect for a long ride in an open car as about 40 classic automobiles, ranging from black Model T Fords to a copper-colored hybrid roadster partially made from a Caterpillar tractor, pulled into the parking lot on The Alameda in San Juan Bautista. Drivers and passengers were there for the first annual Jim West Antique Auto Tour over the Juan Bautista de Anza Historic Trail, once known as Old Stage Road that ran from Gonzales to Morgan Hill.

Graniterock agreed to grade and maintain the trail and Don Chapin Company built gates at both ends. In July 1999, the trail was named for Juan Bautista de Anza, who led an expedition from Monterey. San Benito County and the National Park Service entered into a five-year agreement to support legally designating the Juan Bautista de Anza National Historic Trail. To maintain this designation, the trail must be traveled at least twice a year. If this does not happen, the road will revert back to the surrounding landowners.

The tour was put together to honor West, who served as San Juan Bautista mayor, worked for Graniterock, and was a classic car guy who loved and rebuilt numerous vehicles. West took his own life on Dec. 6.

West’s friends wanted to do something special in his memory, so they changed what had been known as the Tiffany Tour to celebrate the 100th anniversary of Tiffany Ford, the first Ford dealership in California, to the Jim West Antique Auto Tour. They also erected a memorial to West along the trail.

The significance of a road trip along the historic trail is its connection to local politics and the effort to preserve the route. The portion of Old Stage Road that runs through rolling hills between Salinas and San Juan Bautista was abandoned in July 1998. It was converted to the first public-private recreational trail under the tutelage of Supervisor Richard Place, who, coincidentally, rode in a Model T with this reporter during the May 11 tour. Place recounted how the road was a hangout where kids went to drink, a dumping ground for cars and trash, and the location of more than one crime scene.

The tour got underway around 10 a.m. San Benito County Sheriff’s deputies stopped traffic on Highway 156 as the cars headed out to San Juan Grade Road toward Salinas, then looped back onto the trail shared by hikers who whipped out their cell phones to take photos and videos of the long line of vintage cars.

The journey wasn’t without its perils, though, as one car overheated and was pushed out of the way so the others could pass. Someone said they had called AAA, but others wondered how a tow truck would find the car. The roadster stalled on a steep hill.

Eventually, the long line of cars reached the monument honoring West. Supervisor Anthony Botelho, who went along for the ride, thanked fellow Supervisors Jim Gillio and Peter Hernandez, as well as San Juan Mayor Cesar Flores for being there. He spoke about the trail when it was known as Old Stage Road, saying it was never one of the better maintained roads in the county.

“When I was younger we used to hop off the road and drop down into the canyon to hunt deer,” Botelho said. “I’ve got to admit I never shot any deer, but maybe a couple bottles of beer.”

He said the county wanted to recognize West, who participated in numerous community service organizations and coordinated the maintenance of the trail.

“He loved cars,” Botelho said, “and was a wealth of knowledge on antique cars. He also loved politics. We miss him and thought it would be appropriate to have this dedicated in his memory.”