Nearly 80 Mutsun descendants attended a dictionary distribution and language workshop on June 24 in San Juan Bautista. The event was the first since the most comprehensive Mutsun-English, English-Mutsun dictionary was published online last year 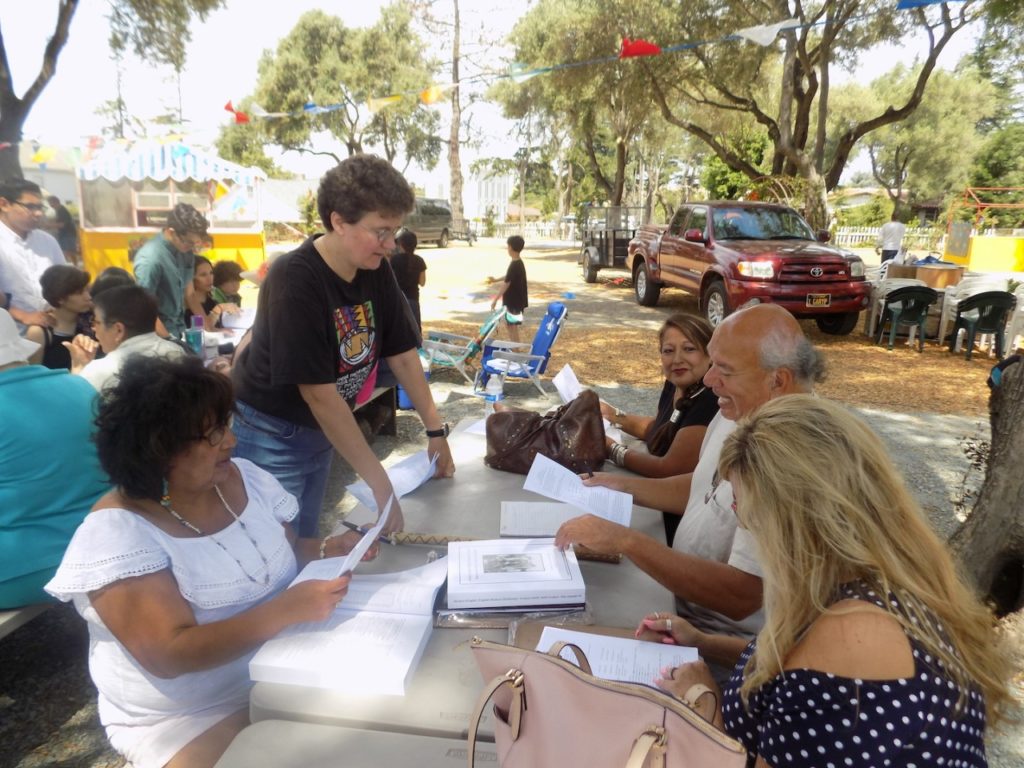 Under the shade of Mission San Juan Bautista’s olive grove, a California indigenous language wafted through the air, spoken by several men, women, and children for the very first time. Alleviating the strain that many experienced uttering words and phrases that their forebears had said with ease were a dictionary and the two individuals who devoted the past 20 years of their lives creating it.

Organized via email and Facebook, the Mutsun-English, English-Mutsun dictionary distribution and language workshop drew nearly 80 Mutsun descendants to the space adjacent to the mission’s garden on Sat., June 24.

As previously reported by BenitoLink, the dictionary—the most comprehensive on the Mutsun language to date—became freely accessible onliine last year, thanks to the efforts of Amah Mutsun Tribal Band member, Quirina Geary, and University of Arizona Professor of Linguistics, Natasha Warner.

Geary and Warner first met in 1996 at a Breathe of Life Language Restoration Workshop for California Languages at the University of California, Berkeley.

Over the next two decades, they poured over language archives, compared notes often by phone or email, and made numerous drafts before publishing their magnum opus, which, according to its authors, will most likely include future editions.

Geary, who spearheaded Saturday’s event, explained to BenitoLink that her decision to distribute physical copies of the nearly 700 page Mutsun-English, English-Mutsun dictionary at the San Juan mission was a conscious choice that she admitted did not sit well with some of her fellow tribal members.

“A lot of terrible things happened here [at the mission], but it’s not the land’s fault. And for some of our ancestors, mission life is all they knew,” she said. (The Amah Mutsun Tribal Band represents descendants of the mission Indians of Missions San Juan Bautista and Santa Cruz).

She reiterated these points in her opening remarks to attendees and signaled that the day could be a way of coming to terms with the past, while ushering in hope for the future.

“The land needs healing, and we need to change our perception of it to try to move forward,” Geary said, adding that the Saturday event marked “not an end, but just a beginning.”

Wearing a warm smile, Professor Warner spoke next, introducing herself in Mutsun.

She then stated in English that her goal was to help those in attendance learn how pronounce Mutsun words and how to use the dictionary.

As her class followed along using a provided cheat-sheet of sorts, Dr. Warner explained some general rules when speaking Mutsun.

Vowels, she said, are pronounced like those in Spanish. The vowel “a” sounding similar to the “a” in “taco.”

Pronounce single consonants in Mutsun, like their English counterparts, the linguist noted. But when encountering double consonants, “be sure to sit and hold” the letter, she said.

After the mini-lesson on pronunciation, Dr. Warner led her students—ranging from young children to grandparents—through a series of exercises that allowed them to practice their ancestral tongue.

Among those speaking Mutsun for the first time was Yolanda Cordova.

The grandmother from Modesto, who made the trip to San Juan alone, said that learning Mutsun would eventually make her trilingual (she is fluent in both English and Spanish), while giving her the necessary tools to her teach grandchildren the language.

Describing the ways in which she plans to impart this knowledge, Cordova said, “I will start by making labels using Mutsun words for plants, a gallon of milk, and other things,” adding, “I’ll even have a word of the day.”

Dr. Warner and Geary circulated through the olive grove, assisting when they heard mispronunciations and fielding questions from Mutsun descendants.

The pronunciation lesson was followed by an introduction to the soft-bound dictionary, which Geary explained was paid for by a grant secured through the National Endowment for the Humanities.

Holding up the dual-language lexicon, Dr. Warner said that its organization was user-friendly.

She then delved into its contents, asking attendees to turn the dictionary’s second half, where Mutsun words appeared next to English entries.

“Lots of Mutsun words have more than one English meaning,” Dr. Warner said, underscoring her point with the word “ache.” Kaayi (pronounced, kaw-yee) is used when suffering from a migraine, heartbreak, or tooth pain, she explained.

Spanish colonization of modern-day California forever altered life for the indigenous population. And language was not impervious to this change.

Many words in the dictionary bear this influence. For example, the word “dog” lists two potential choices, “hucek” and “cuucu,” the former originating from Mutsun and latter a variation of the Spanish word, “chucho.”

So which word should one pick? Hucek (pronounced, hoo-chek) of course.

“If you have a choice, choose the Mutsun word,” Dr. Warner advised.

Professor Emerita of Linguistics at U.C. Berkeley and a co-founder of the Breath of Life workshop, Leanne Hinton, praised the work of Dr. Warner and Geary.

“I really love how the dictionary has become a central part of an effort to restore the [Mutsun] language,” Dr. Hinton said at the workshop’s conclusion, adding that “language is one of many paths to community and tribal identity.”

Hinton also commended the efforts by archivists to catalog, preserve, and digitized material over the years, making it easier for those interested in language revitalization to start the process.

“I’m very happy that the dictionary has been finalized and made available to our full membership. We, as a tribe, will be supportive to those who want to learn” Mutsun, he said.

Reflecting on her three hours spent in San Juan, Geary said that she was encouraged by the participants’ “genuine interest” and moved by the “sparkle in their eyes” when interacting with the dictionary and each other.

Lifelong Hollister resident, Vera Powers, said she feels indebted to the two women who created what she is now calling her “new family dictionary.”

“I learned a lot today,” she said, before repeating what Geary had earlier stated. “Preservation starts at home."