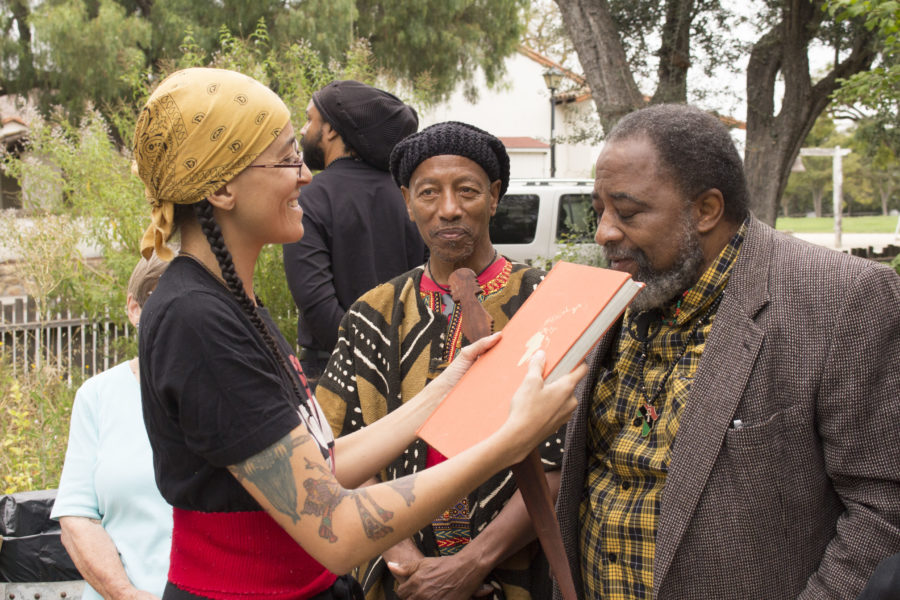 Snodey also presented an artifact to San Juan Bautista resident Richard Lopez near the end of the ceremony. Photo by Noe Magaña.
×

San Juan Bautista resident Richard Lopez and Minister Barry Houston of the House of Sankofa were honored by community and culture activists in a ceremony at the Amah Mutsun Gardens on Sept. 7. The ceremony kicked off the 150th anniversary celebration of San Juan’s incorporation as a city.

Lopez and Houston were recognized for their efforts in preserving indigenous and African history and culture, respectively.

“I’m humbled to be here at this circle to remember and recognize the spirits of all people, but moving forward,” Houston said.

The ceremony’s date and place was significant as the first event celebrating San Juan Bautista’s 150th anniversary, and was part of an effort to extend the historical narrative beyond the establishment of the city. The garden site at the corner of Second and Mariposa streets houses dozens of native plants and a wood cabin. In past years it housed a Wells Fargo Express office, a two-story hotel and adobe apartments for Mission military families.

Houston spoke of the need for unity. He said humans have an obligation to seek the truth, and when they find it they must apply justice and correctness.

“There is no such thing as a statute of limitations on the application of truth,” he said. “So no matter how long ago that we had the colonizers come here and do what they did, we still have the obligation to restore.”

San Juan Bautista resident and local activist Mandisa Snodey presented Houston with two objects given to her by Roy Johnson, an African biologist from Monterey: a book on Africa published in 1966 and a wooden sword.

“I wanted to honor you being a warrior and protecting our history and providing the truth,” Snodey said.

The sword was an artifact from Khemet, now known as Egypt.

Snodey also presented Lopez with an artifact she called medicine of his lineage that was retrieved from the waters off Pacific Grove. She spoke of how the narrative of history is limited to the Mexican and Spanish governments, and does not continue to the indigenous people.

“We don’t have an indigenous monument to honor the first nations people or anything to mark the ancestral homeland of the descendants,” Snodey said.

Rather than being the stewards of narrative, she said, the circles and commemorative indigenous work are meant to give people a space to provide their own narrative and connect with their roots.

Attendees marked the end of the ceremony by taking a pinch of Cedar leaf and dropping it into the fire. Prayers called for unity, to recognize history, to honor ancestors, and for truth.