The brainiest birds in North America may not be beautiful, but they sure are fascinating 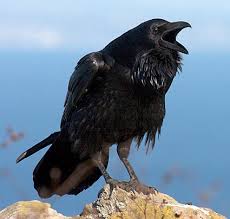 I’d like you to share some time with the Common Raven. Not the bird that Edgar Allan Poe slandered in verse, but the genuine article. To my mind, ravens are among the most interesting birds anywhere, not just in San Benito County.

There are certainly more of them among us than there were only a few decades ago. That’s in large part because they are remarkably like us. They’ll eat nearly anything, but road kill (that’s where we come in) is an especially yummy treat. They’re smart. They’re social. They appear to engage in play. They can anticipate delayed rewards. Most telling of their link to us; they engage in base subterfuge.

Let’s cover the thing that vexes many birders, and that’s how to know if that large black object in the sky really is a raven. Ravens are not crows. America counts several crow species, but all of them share some traits that help sort them easily from ravens. Even though both are rather large, all black birds, ravens are larger. Ravens soar from time to time, but crows flap pretty constantly, usually only gliding as they alight. The easiest things to look for are heads and tails. Ravens appear to have larger heads and bills, because they are larger. On the wing, ravens have a tail shaped like the image on the ace of spades, whereas crows’ tails are shaped like a paper fan.

Then there’s the voice. Both species make a number of noises from popping to croaks to the “Caw, caw” of comic strips. Crows are tenors, but ravens are distinctly baritones.

It wasn’t too long ago that seeing a raven in town was kind of an event. But they’ve learned to thrive on our debris and our presence. Ravens have been documented nesting in Hollister as well as the far reaches of San Benito County.

So what makes this large, black, carrion-gobbling bird so interesting? It’s because for anyone who spends a few moments watching them, they are fascinating, not for their showy feathers or beautiful song, but for their behavior.

Author-sociobiologist Bernd Heinrich has made a career out of studying ravens and then telling their stories in print. His 1991 book, “Ravens in Winter,” opened a lot of eyes to these birds. He tracked them through a Maine winter, kept some in flight cages, and tested their wits even as they tested his. Spoiler alert: Heinrich didn’t always come out the winner in these battles of wits.

Ravens, crows, magpies and jays are all part of a group lumped together by biologists as corvids. While they don’t share a lot of superficial features, they do share intelligence and adaptability. In fact, as a percentage of gross body weight, the Common Raven has the largest brain of any bird in North America.

Heinrich appeared to answer one question, and that is, do ravens employ guile? He watched as ravens cached food, only to move it to new hiding places when they noticed they were observed by other ravens.

A few of us once watched a flock of ravens tearing into the carcass of a coyote that met its end near Panoche Road. Suddenly, through the tunnel-vision of our binoculars, we were surprised to see the ravens falling over themselves to quickly distance themselves from their source of food. Then, a Bald Eagle arrived to land on the carcass.

But the ravens didn’t leave. Instead, they waited at a respectful distance, knowing full well that the eagle would have its fill, leaving plenty for the ravens to eat and to stow away for a few subsequent meals.