Northern Mockingbirds are vocal newcomers to our region 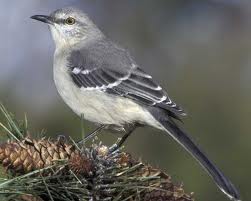 I was wide awake at 3 o’clock this morning, and I’m sure there was a smile on my face.

The reason for the smile was the reason for my wakefulness – the desperate singing of a Northern Mockingbird.

If you’ve ever given a second thought to birds, chances are you know this one. It’s a modest-sized, slender creature (think of a robin on a crash diet), cloaked in colors of gray and white. It’s not shy, and for much of the year, it sings with the dedication of a hyperactive operatic tenor.

They nest locally, even thriving in our more urban landscapes. In fact, a few years ago one pair that nested across the street seemed to wait for me to toss snails from our vegetables to the asphalt, where they were snatched up and returned to the nest.

I know well that the sound of a mockingbird singing way past closing time has limited appeal for a lot of people. One of our daughters arrived in the kitchen bleary-eyed a few mornings, vowing to commit mayhem with the bird that kept her up. When I was a kid, a mockingbird in the neighborhood had learned to do a credible impression of a frog croaking. That one irritated my parents no end.

Since songbirds are vulnerable to just about every predator that ever walked or flew, why do mockingbirds draw such attention to themselves?

You may have guessed already, because the answer is obvious: sex.

Male mockingbirds are not born with the songs they sing. They learn them. There was one near our house for a while that could do a great imitation of a cell phone ringing. The one that’s been singing all night recently apes the call of a Northern Kestrel, a small falcon that mockingbirds would be wise to avoid.

Since it takes time for the birds to learn each song, a large repertoire gives notice that they’ve been around for a while, successfully avoiding cats, hawks and disease while finding adequate nutrition. In other words, the birds with the most music are probably the best providers and the best candidates for successful mating.

Right now, that bird (I know it’s the same one, because he sings from the same perch) is working through half a dozen songs at top volume.

Although their song is part of our daily aural landscape on the Central Coast, it was not always so. Mockingbirds made their arrival in our home patch some time in the second decade of the 20th Century. The “Northern” in Northern Mockingbird is relative, but historically, they were desert denizens.

The expansion of their range is attributed to a growing human presence. Mockingbirds seem to prefer to be in broken habitats, just like our city streets dotted with lawns and gardens.

Biologists lump them into a family group called mimidae – the mimics. The other common member of the group is the California Thrasher, which is common in San Benito County, but seldom seen in back yards.

The thrasher also sings with relentless dedication, sounding off all year long to declare its presence and its territory.

A friend who lives a stone’s throw from Pinnacles National Park is weary of the constant chatter of his thrasher population, but I’m not sure I’ll ever tire of seeing one perched atop a clump of manzanita, head back and sickle-shaped bill open, with an impossible stream of music pouring out into the morning light.