Leon Logothetis has been on a two-year journey around the world rewarding acts of kindness from strangers. 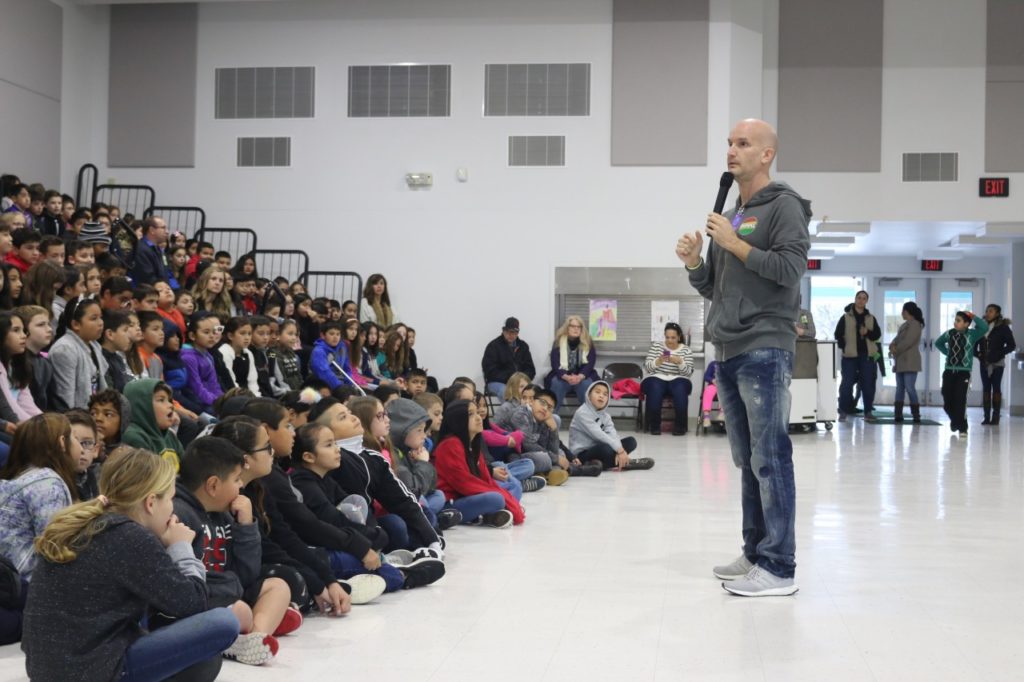 Leon Logothetis, host of the Kindness Diaries show on Netflix, told nearly 200 Ladd Lane students how he was bullied in school and how the kindness of one boy saved him. Photos by John Chadwell. Ladd Lane Literacy Coach Maylani Mahler heard about Logothetis from her kids and reached out to him to visit Ladd Lane. Photo by John Chadwell. Students were eager to share their feelings about being bullied or treated kindly. Photo by John Chadwell. Five kids picked five friends who had been kind to them and as they stood up Logothetis told everyone how special their acts of kindness were. Photo by John Chadwell. A lot of hands went up when Logothetis asked how many kids had been bullied. Photo by John Chadwell. Ladd Lane Elementary School received a visit Feb. 4 from Leon Logothetis, a former London stockbroker turned public speaker who now hosts “The Kindness Diaries” on Netflix. He talked about his two-year journey around the world seeking to reward acts of kindness.

“I took a yellow motorbike and started in Los Angeles and went all the way around the world back to Los Angeles, relying on the kindness of strangers,” Logothetis said. “In each episode I give an unsuspecting good Samaritan a life-changing gift.”

He said he was at Ladd Lane to inspire the kids to be kind and demonstrate that kindness is a powerful way to live.

“Hopefully, my message will stay with them for many years and they will live kinder,” he said.

Maylani Mahler, literacy coach at Ladd Lane, said the school’s kindness club wanted to invite Logothetis to speak at the school to help spread kindness. The club was formed last year, with around 100 students acting as kind ambassadors.

“They wanted to go out into the world and do kind acts, which doesn’t cost anything more than a smile or kind gesture,” Mahler said.

She added that some of the students already knew who Logothetis was, having seen his program on Netflix. Mahler heard about him after he spoke at Spring Grove Elementary School where her kids attend. Then she contacted him.

“He emailed right back, which I thought was nice because he’s a busy man and he took the time,” Mahler said. “We scheduled an assembly. The kids did a fundraiser and raised about $2,500 to get him to come here. It just paid for his expenses.”

At the assembly, Logothetis told about 200 third- through fifth-graders that when he was in school he was bullied every day. Then one boy was kind to him and it changed his life.

The mood among kids and adults alike changed as he asked each student to name another student in the bleachers who had been kind to them. As each named a friend, Logothetis asked them to stand. Each student beamed as they stood and Logothetis told everyone how special they were because they had changed someone’s life forever.

“Imagine if I had asked these five kids to mention people who had been kind to them and nobody stood up,” he said for effect as the room went silent. “There are kids in this world that other people are not being kind to.”