Supervisors aim to have it finalized Nov. 20. 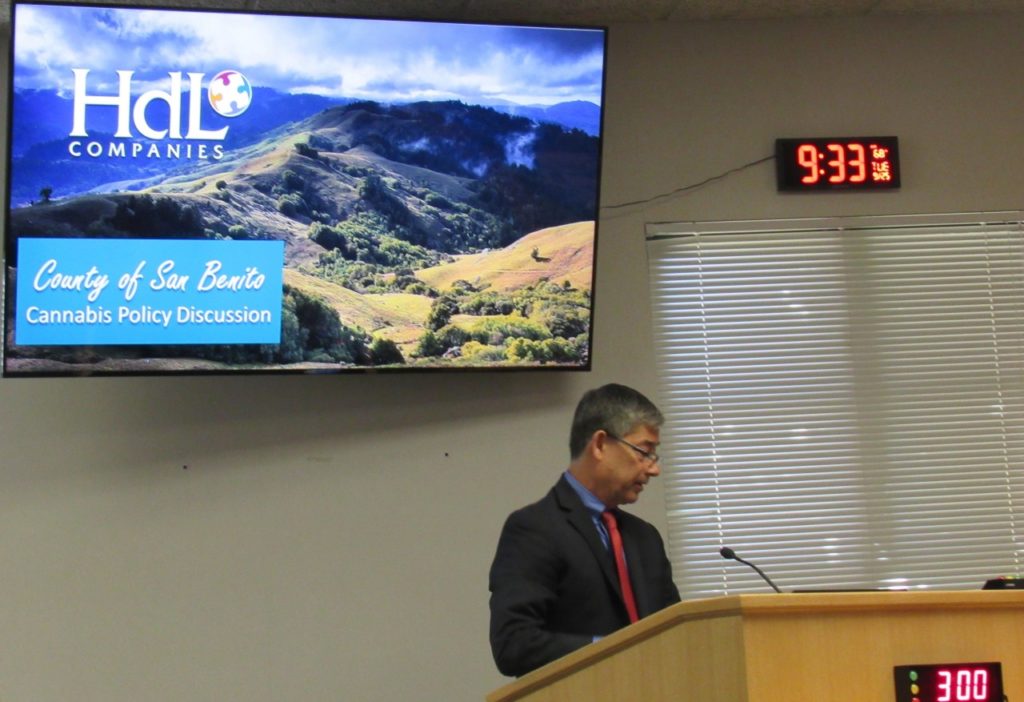 David McPherson presents latest draft of cannabis ordinance to the San Benito County Board of Supervisors. Photo by Noe Magaña.
×

Cannabis regulations were discussed at the Sept. 25 meeting of the San Benito County Board of Supervisors, where elected officials considered permit types and selection criteria for an ordinance that would cover the unincorporated parts of the county.

The board has worked on a cannabis ordinance since 2017. After county voters in June approved Measure C, which created a tax for cannabis businesses located in the unincorporated area, some residents urged supervisors to expedite the ordinance.

At the Sept. 25 meeting, the board directed HdL Companies consultant David McPherson to limit cannabis cultivation permits to 50 in the latest draft of the county’s cannabis ordinance.

However, multiple licensees can operate within a single property permit.

“They only have 98 permittees, but those permittees on the same premises are allowed to have multiple licenses as long as they still meet the criteria,” McPherson said when he cited Santa Barbara County’s ordinance.

Permits for distribution, manufacturing and testing do not have a limit, but requirements were added to the last two.

The selection criteria for cannabis business applicants, according to the presentation are:

The county also raised the eligibility age of applicants from 18 to 21 because of state regulations.

After McPherson ended his presentation, the Board of Supervisors directed him not to change the ban on outdoor cultivation.

“The results from indoor, the plant isn’t doing what it does out in the sun, in nature,” Michael Caragio said during public comment. “The results with patients we’ve been working with the last four years for opioids, cancer, is a phenomenal difference.”

Supervisor Jaime De La Cruz asked if there was any language in the ordinance on the county’s ability to look into cannabis businesses’ financial books.

McPherson said San Benito County has the authority to audit cannabis businesses for tax purposes and law enforcement can investigate businesses without any subpoena for complaints about illegal activity.

Supervisor Robert Rivas said he would like a review committee to allow the San Benito County Sheriff’s Office and other stakeholders to be part of the process of approving applications.

“At the same time we need to be cautious that it won’t tilt the application of recommendation to say no,” De La Cruz said. He added that they want a fair, objective scoring system to get the best applicants.

County voters approved Measure C in the June 6 primary election to create a tax on cannabis businesses, which led the county to hire HdL Companies to assist with designing an ordinance.

The new ordinance draft is expected to be presented to the San Benito County Planning Commission on Oct. 17 before coming back to the Board of Supervisors on Nov. 6 for a first reading. A second reading and adoption of the cannabis ordinance could happen as early as Nov. 20.