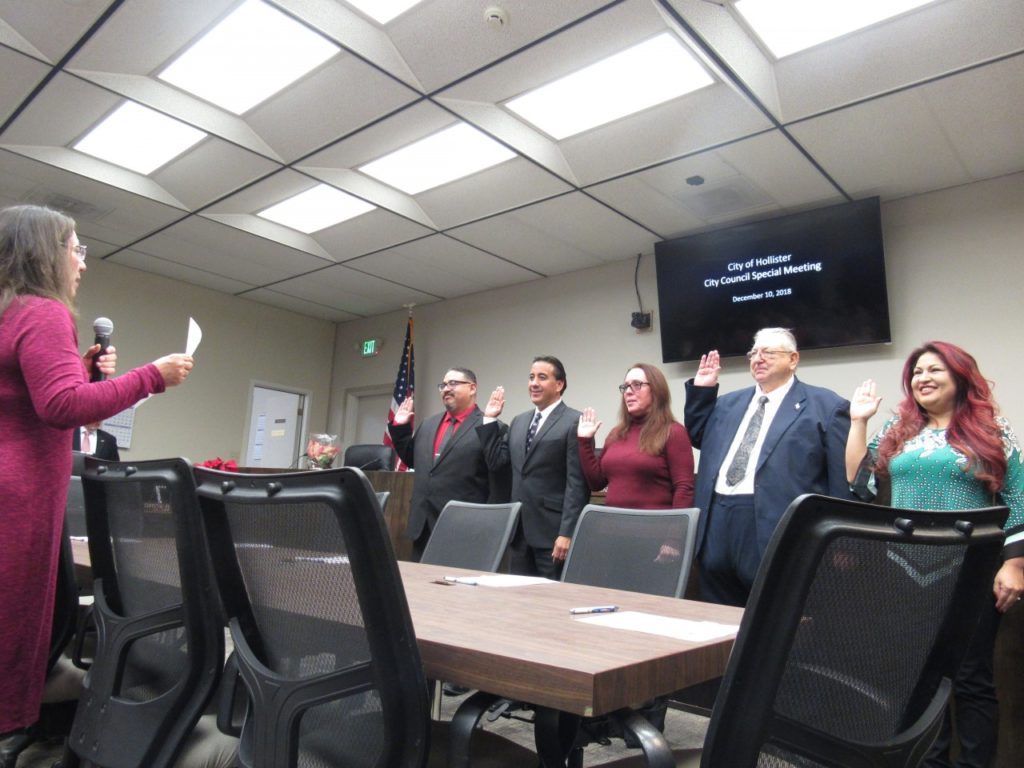 The mayor requested a city town hall meeting in early January to hear the concerns of the public.

The new members—Honor Spencer, Rolan Resendiz and Marty Richman—lightened the serious mood with jokes that got positive response from attendees at City Hall before making statements.

District 3 representative Spencer thanked her family, friends and her predecessor, Karson Klauer, who had served on the council since 2014. He did not seek reelection.

Spencer faced off against cannabis consultant Elia Salinas and restaurateur Raul Escareno for the District 3 seat, winning with just under 45 percent of the vote.

Spencer said she is looking forward to the next four years and hopes to make the community proud.

After hearing councilmember Klauer’s statement on how he relied on his family to support him in his responsibilities, Spencer said “I went in this with my eyes opened. After listening to Karson talk, I hope my family won’t slap me around when I come home crying.”

Resendiz, representing District 2, also thanked the outgoing councilmembers for their time and dedication to the community, as well as the community who elected him. He won the race against councilmember Mickie Luna to represent the west side of town in November with nearly 66 percent of the vote.

“I look forward to working with you first and foremost, the staff and all the other council members up here,” Resendiz said.

Richman, elected to represent District 4 after a head-to-head race with Salvador Mora, also thanked his family, city staff and the community who have an interest in local government.

“You make the City Council what it is,” Richman said. “This is a wonderful place to live because of people like you and I hope you encourage other members of the community to be as interested in what goes on here because we represent them. We’re not here for ourselves.”

Velazquez, re-elected for his fourth term, thanked the public for believing in him and his vision for the city. He thanked the outgoing councilmembers for their professionalism.

“It’s very important that all of you keep speaking out and let us know the direction because our job is to make sure we fulfill that direction, implement and we succeed as a community,” he said.

Velazquez presented the outgoing councilmembers with plaques in recognition of their service to the community.

Klauer thanked several members of the community, commissioners and staff, and his family and friends who supported him through the tougher times representing District 3. He called his time as a councilmember a highlight in his life.

“It’s hard for anybody to do this when they are on an island on their own,” Klauer said.

Jim Gillio thanked the entire council for teaching him how to be a good representative to his district. Gillio was appointed to the District 4 council seat in early 2017 after former councilmember Roy Sims abruptly resigned to move outside of the district.

Instead of running for reelection to the council, Gillio instead ran to represent District 4 of the San Benito County Board of Supervisors against incumbent Jerry Muenzer. Gillio won with about 73 percent of the vote.

Luna also thanked her constituents and said she will continue to be an advocate for the community. She offered her help to anybody seeking to better the community.