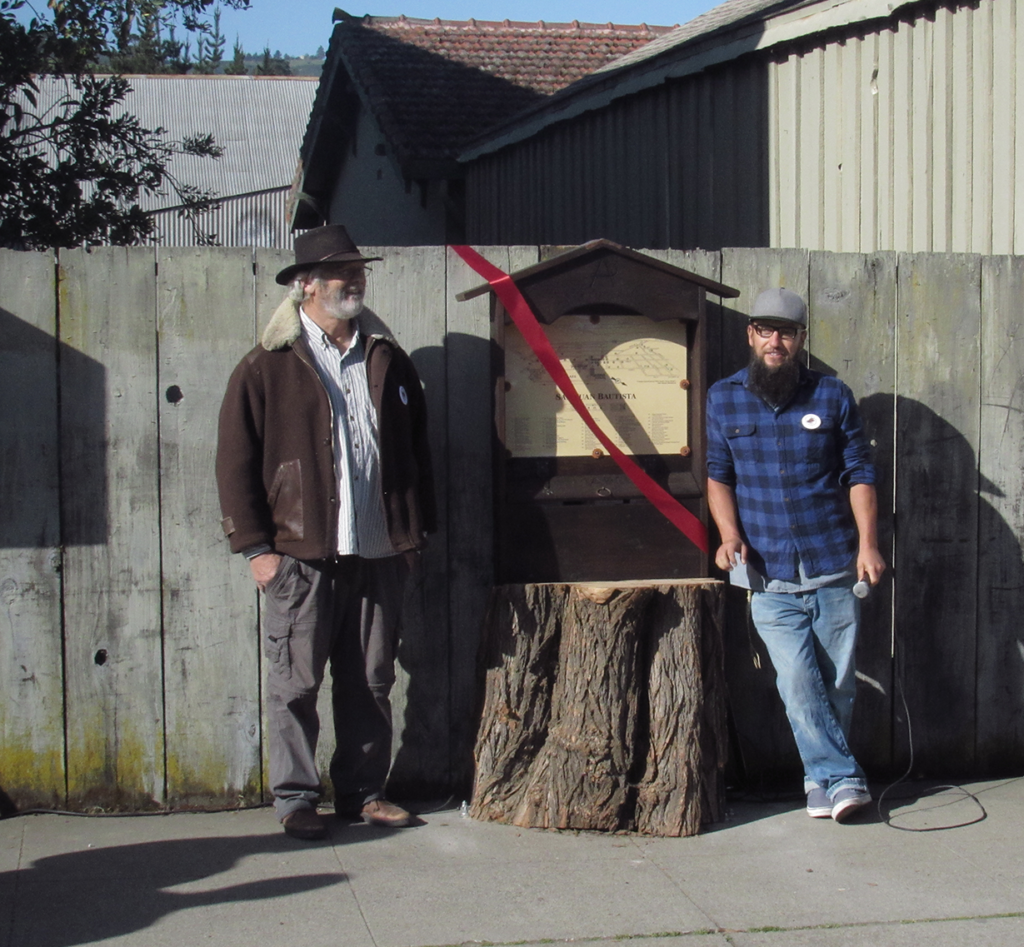 John Grafton (left) and Joe Claus (right) stand next to the new kiosk for the San Juan Bautista Historic Walking Trail. Grafton came up with the idea to put the kiosk on a tree stump, while Claus crafted it. Photo by Noe Magaña. The kiosk, located between Inaka Japanese Restaurant and San Juan Bakery on Third Street, is the latest addition to the walking trail, offering maps for visitors to take. It’s also adorned with a large version of the map. By scanning QR codes on the plaques of buildings along the walking trail, visitors are directed to the official website to learn about the history of each building. Future plans for the walking trail include audio recordings about the buildings.

The kiosk “will be a service to our visitorship,” said Halina Kleinsmith, a member of the San Juan Bautista Walking Trail Committee. “That was our goal, so that people would do the two-mile historical walking trail loop.”

Kleinsmith told over 30 attendees of the ribbon cutting that San Juan resident John Grafton came up with the idea to place the kiosk on a tree stump.

The custom-made, redwood kiosk was created by San Juan Bautista resident Joe Claus. It features a rendering of the brand of Mission San Juan Bautista, a carved letter A. It also includes handmade hinges, nails and a 600-pound locust tree stump that serves as its base. The maps are stored in a shelf with a lid to protect them against damage from weather conditions.

Claus said he picked up the tree stump, which he believes is about 300 years old, from the San Juan Bautista State Historic Park three years ago when it was being thrown away. He said he designed the Mission’s brand with three different pieces of branding irons. The challenge was using material that would allow the kiosk to stay consistent with the “San Juan look.”

“It feels good to contribute to the community I live in,” Claus said. “And to be able to use my skills as a blacksmith, a woodwright and even some leatherwork too.”

A quilt with 30 images related to San Juan Bautista was displayed during the ceremony. Georgana Gularte, a member of the Strategic Committee, said the quilt was created 50 years ago by fourth and fifth grade students at San Juan School. It will also be shown during other events as part of the sesquicentennial (150-year) celebration of San Juan Bautista.

The $38,000 needed for the walking trail came from grants and donations, Freels said. Of that, $12,500 came from the city and $17,500 from the Community Foundation for San Benito County. The rest was from historic building owners, as well as Supervisor Anthony Botelho and True Leaf Farms.

“This was a collaboration of multiple entities,” Freels said. “We couldn’t have done it without this entire group.”

In its first year, the San Juan Bautista Historic Walking Trail website had 15,000 visitors take the virtual tour and QR codes have been scanned 698 times by visitors from places including Chile, France and Canada.

“This is such a huge thing for the city of San Juan Bautista to help promote tourism and, of course, our economic vitality,” Freels said.