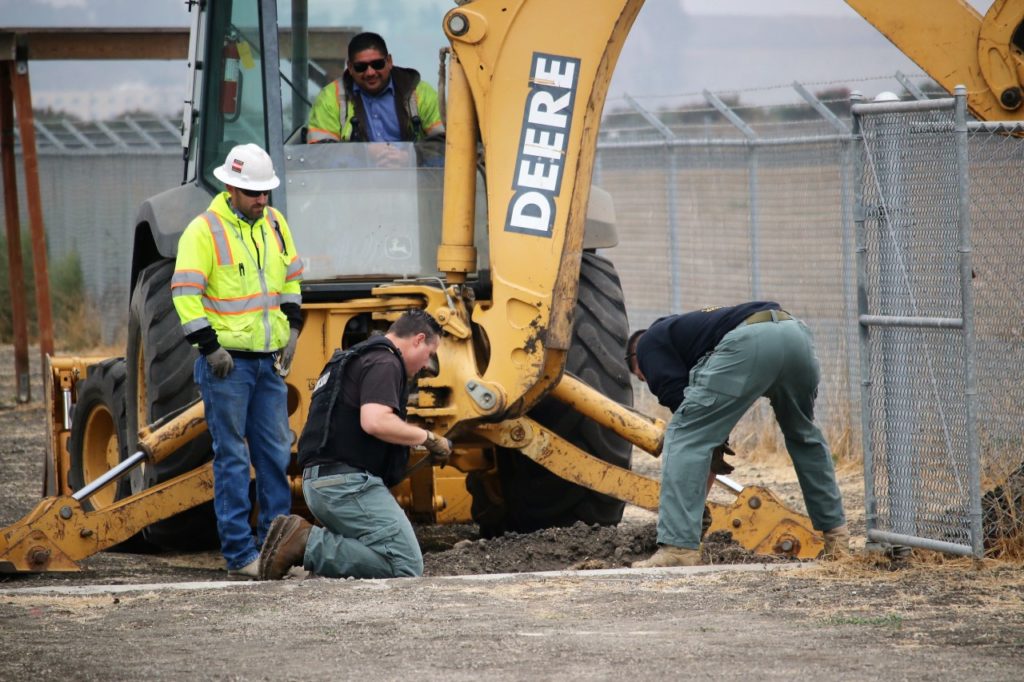 By noon, Airport Manager Mike Chambless sent a text to BenitoLink that nothing had been found in two of the largest holes.

“Seems to be a large amount of iron in the clay layer,” Chambless said, adding that three other holes contained chain link fence clips that were probably 60 to 70 years old. “The park is clear and we will hopefully be able to open it by the end of the day.”

After a live practice bomb was discovered Sept. 7 as a city crew was digging a trench for fiber optic cable, the city closed the dog park indefinitely on Oct. 16.

As the bomb squad directed the effort, a city worker used a backhoe to dig toward the largest and deepest anomaly, buried an estimated four feet down. Chambless told BenitoLink at 9:30 a.m. all that had been found was a concrete lid similar to a meter cover. An hour later, the hole was eight feet deep and the crew had not found any metal object that had been detected. He said they were going to widen the hole until they found whatever was buried there.

Chambless said he spoke with the Army Corps of Engineers a week ago and that it took a while before the agency figured out he wasn’t talking about the former bombing range, which was located east of Fairview Road and north of the Santana Ranch development.

“They sent me an 86-page document that goes out of its way to say there’s nothing here,” Chambless said with more than a little sarcastic tone.

City Manager Bill Avera said the city has taken every precaution it could in mitigating what the ground-penetrating scans revealed. He also said the Army Corps of Engineers did not seem overly concerned about any more potential bombs being buried at the site.

“We took the next step and asked the Monterey County Sheriff’s Bomb Squad if they’d be interested in doing a little exercise and they agreed to come out here,” Avera said. “We were going to try and get an independent contractor out to do it, but there wasn’t anybody out there, so [the bomb squad] stepped up and volunteered.”

Avera said the bomb squad helps on a mutual-aid basis so there was no cost to the city. And because the city employees, including the firefighters, are all salaried, there was no additional cost.

Because of the size of the anomaly, Avera said he expected to find a 55-gallon drum rather than explosives.

“When you excavate, that’s the sort of thing you often find,” Avera said. “The worst thing you can find is an old abandoned 1,500-gallon tank, regardless of what it is. Then you’ve got to come out and do a Phase One soil analysis and make sure whatever was in that tank didn’t leak into the soil. That’s what really costs us a lot of money.”

“If it’s something then we can take care of it right now,” Caldwell said. “There’s an item that’s four feet deep and we’re trying to determine what it is. It could be just a piece of metal or an old ordnance. We just don’t know right now.”

He said the bomb squad was using a high-pressure water jet with a vacuum to dig down alongside the object to determine what it was. Out of the five anomalies, he said besides the one being excavated they would examine two others. He said one was probably an old fencepost and they had dug up a piece of concrete with embedded rebar about a foot underground.