Clinician leads 70 riders in colt starting, and two horsemanship classes as auditors come from near and far 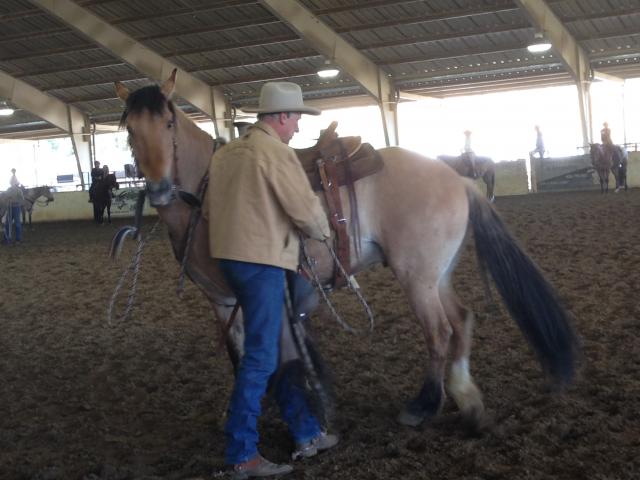 On May 1, 70 riders and more than 200 auditors came to Thorsens Arena in Morgan Hill to improve their relationships with their equine partners at a Buck Brannaman clinic organized by Bonne Stoehn of Santa Cruz and staffed by her team of volunteers. Stoehn has been bringing Brannaman to the Monterey Bay Area for the past 20 years.

In one of Thorsen’s twin covered arenas with enough space for 30-plus riders to practice their maneuvers and technique,  the bite in the breeze letting them know the fog may have lifted, but remained nearby. Horses of many different sizes and shapes and colors; bays, greys, paints, blacks, beneath riders wearing flat brimmed vaquero hats, or English helmets, baseball caps, or bareheaded, their hands holding loop, or split reins, mecátes, attached to their snaffle bits. The whisper of hooves brushing through the graham cracker crust-like sand in the arena often broken by the harsh whinnies of the insecure horses. “It’s okay.” Buck says, “It’ll get quieter as you get their attention these next few days.”

There were three classes; a colt starting clinic, and two horsemanship classes with around 25 riders/handlers in each class. Each class lasted three hours. The demand for one of the slots is always much greater than the number of people who can ride. People wait for years to be able to participate with their horse.

For the colt starting clinic, Brannaman brought together an “A-Team” of horseman (and women) from around the West, to ride young horses brought in by owners who wished their horses to be started by those identified by Brannaman as being handy with a horse. This is one of the rare colt starting clinics he offers each year.

Brannaman has been conducting clinics for more than 30 years all over the United States and internationally. His work received attention when Nicholas Evans, the author of the novel, The Horse Whisperer used him as the model for the character played by Robert Redford in the film. Brannaman stepped in and did the actual horsework onscreen for Redford, as well as assisting to get some of the horse stunts accomplished. He shared with the crowd his disdain for the use of the term, "Horse Whisperer", and advised them to hold on to their wallets if they encountered someone describing themselves as such.

Brannaman, the subject of a recent award winning documentary film about his life and work, “Buck.", is one of a number of equine specialists who have been continuing the ideas and philosophy of Tom Dorrance, a repsected horseman with a strong presence in the Monterey Bay Area. Many, including Brannaman, were mentored for years by Ray Hunt, who was deeply influenced by Dorrance and exposed others to Dorrance’s philosophy of horsemanship.

Monterey Bay Area resident, Kristi Fredrickson, met Buck 20 years ago when she was struggling with her dressage scores in the three-day eventing world and a friend invited her to a clinic. She left her English saddle behind and started riding in his clinics at least once a year and then began starting colts in Brannaman’s clinics. When the economy soured and her hi-tech job faltered, she began working with horses full-time.

In 2008, when the local horse shelters were being burdened with abandoned animals because people could not afford to keep them, she began helping to prepare shelter horses for placement in new homes and having success by dealing with their behavioral issues.

“I think that you can gentle a horse over a period of time, and what Buck offers doesn’t rush you, but at the same time, it is the most effective way I’ve seen and the speediest way of getting it done. “He makes real for me what Ray Hunt said about having a picture in your mind and the more fine-grained your picture is, the more you can help the horse.”

Fredrickson said that Buck reminded her of how important it is to “give the horse time to think”, as Ray Hunt used to say. What attracted her to this way of working with horses was that, “It all makes sense!” She said that so much of the horse world seemed to be accepting that things should be done in a certain way without a reason, or explanation. “In this setting, there is a reason and a rationale and my horses get it and my students get it, and so do I.”

Brannaman explained to the riders and auditors that “Horses get anxious and concerned because we are asking them to do things they have never done. If you work on the inside of your horse the little things on the outside, like a busy mouth. will fix themselves.”

He talks about “keeping the promise to give your horse time to absorb information, let them spend some time with having done something right.” and “Don’t get too busy! Horses live in the moment. Let them find that peace. Try to understand how the horse processes things.”

She had previously ridden in a Horsemanship Foundation class with Brannaman. Her horse experience includes riding dressage, doing mounted shooting, and guiding trail rides at the Grand Canyon. As a child, she rode English, and joined Pony Club. Bevins said “There was a lot of pulling and yanking and kicking.”

Bevins noted that of all of the types of riding she has done “This makes so much more sense! I’ve seen how much can be done with them with so little effort. “That doesn’t mean there’s less time spent, but the more time you put into it, the more the horse benefits.”

She also shared, “What I am taking home is, patience. “Reward the horse for every little try and et the ground work good. I’ve seen things being dealt with in the colt starting class which will help me with the horses that I ride.”

Listening to Brannaman leading a group of riders in the arena you hear a lot of terms like “soft feel," or, “rolling the hindquarters over," “following a feel." He encouraged riders to use their hands to reinforce when your horse makes a mistake not following your legs, and always “offering your horse a good deal and allowing your horse the dignity to search for an answer.”

Emma Wynne-Jones, has attended several of Brannaman’s clinics in the past two years since she moved to the United States, from the United Kingdom, largely due to her interest in learning horsemanship and Brannaman, in particular, because she recognized his mastery. She first attended a clinic in Nebraska. She said that she values his work because it makes perfect sense to her, as a beginning rider.

Though she does not own a horse, she said she envisions herself someday participating in a long ride of a least a thousand miles. Wynne-Jones finds that Buck’s concepts apply to her own work with children and teachers in relational competency. She said that she believes that "even if I could not ride, I would attend the clinics to learn about relational refinement."

Angie Sturzaker flew from Australia to see Brannaman. She had been following him on the Eclectic Horseman website, and watching his DVDs, and took the opportunity to fly out to see him work in person.

“My horses have no idea of the new rules when I get home.” she said. “It was helpful to see other people with a range of different tendencies and watching how the horses respond to new information. I learned that patience is important. So many people try new things and it goes wrong and they say, ‘Well it didn’t work!’ but, it might get worse, before it gets better, if you are patient.'"

Sturzaker noted, “The colts bucked when the saddles were put on them, but none bucked today when they were ridden. That’s Buck, making things good for the horses."

The people who attended some or all of the four-day clinic, watching along the arena fence, experienced a dedication to hard work by the riders, as well as by their teacher.

Brannaman shared personal stories of his journey as a horseman and began each session riding his own horses and demonstrating what can be done by someone who has devoted his life to making things better for the horse.

The vaqueros and vaqueras and buckeroos and buckerinas, dressage, eventing, and endurance riders spent four days with Brannaman and left with a wealth of stories to add to their own!