County planning commissioners kicked off public hearing Wednesday night in consideration of environmental review and use permit for solar-power facility proposed for Paicines. 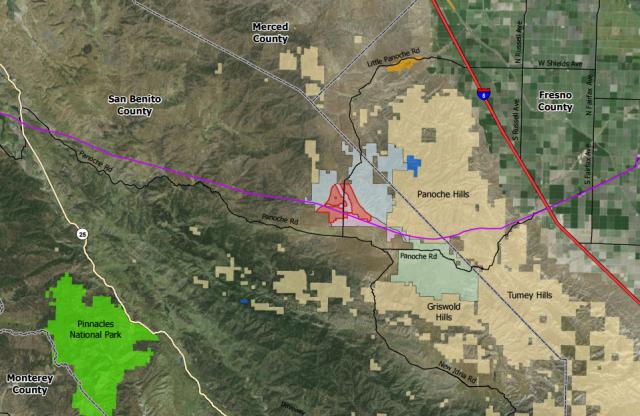 Commissioners expect that Aspen Environmental Group, a consultant of the county that had prepared the "Panoche Valley Solar Project Final Supplemental Environmental Impact Report," will attend the next meeting, now scheduled for noon on April 25, when they once again plan to consider an environmental review and use permit for the 247-megawatt facility proposed for Paicines.

Aspen Environmental Group did not attend the meeting Wednesday, according to a statement by a spokesperson with the company.

Planning Commissioner Robert Rodriguez said in public session that the extension "will allow the public to review the final supplement EIR release on April 10 and continue the hearing until April 25," when officials "will have a full staff report and draft before the planning commission."

"I encourage people to wait until the 25th to comment," added Rodriguez, who later noted that no speaker card had been submitted by the public for a comment on the item included in the commission's agenda.

Amid the ongoing period for public commentary, tension brews over the solar project: Members of Congress, environmental groups and the local community have pointed out doubts over the oversight of several levels of government, along with the current plan for the flagship project of Panoche Valley Solar LLC.

In a letter dated April 15, Sierra Club Senior Campaign Representative Sarah Friedman touched on the possibility of confusion over updates by officials in charge of the schedule for public commentary.

"In our comments on the draft Supplemental EIR, we raised serious concerns related to impacts to air resources, traffic and biological resources from the revised project, and the adequacy of the identified mitigation measures to address these impacts," wrote Friedman. "The FSEIR has now been available to the public only four days, but from a review to date, it appears that our comments, and agency comments, were not adequately addressed. We reserve the right to provide written comments prior to April 25 and look forward to our members being able to provide public comment at the Planning Commission meeting on April 25, in advance of any recommendation by the Planning Commission."

In a statement later Wednesday to BenitoLink, Friedman said that she does not believe that the project would be necessary for the state to meet a long-term clean energy target of 50 percent proposed by Gov. Jerry Brown. She noted that a large number of renewable energy projects are seeking power purchase agreements.

Spokespersons from the Santa Clara Valley Autobon Society and the Loma Prieta chapter of the Sierra Club earlier this year said in writing that that the project's objective "requires updating due to the maturity of California’s renewables market, progress in meeting California’s RPS goals and the release of governmental planning efforts which provide for more than enough energy to exceed the state's renewable energy standard targets."

"The SEIR contains substantial changes from the project as approved," said the environmental groups, which additionally cited concerns over potential effects of the project on traffic, air quality and water. "Many of these changes will result in increased and significant impacts to special status species and other biological resources."

Also in recent months, according to public records signed by members of Congress and obtained by BenitoLink, Reps. Sam Farr (D-Calif.) and David Valadao (R-Calif.) wrote to the United States Army Corps of Engineers, as well as the U.S. Fish and Wildlife Service, to urge each of the federal agencies to "expeditiously complete its environmental review of the proposed Panoche Valley Solar Project in order to meet the forthcoming deadline requirements for federal financial assistance."

"The project, as currently configured, would finance the permanent conservation of over 24,000 acres of important Diablo Range habitat," wrote the congressmen, who noted that they saw "no reason" that the agencies could not complete a federally required draft of an environmental impact statement months ago. "The future success of this project and habitat conservation depends upon completion of construction by Dec. 31, 2016 to secure federal investment tax credit support. We look forward to the important economic benefits the project will bring to the region as well as the important contributions the project will make to California's energy portfolio."

The federal agencies did not immediately respond to queries Wednesday by BenitoLink, seeking comments in response to the aforementioned requests by Farr and Valadao.

While the Army Corps of Engineers as of Tuesday remained the federal lead for the solar project, a shift in oversight remained possible, according to Katerina Galacatos, the south branch chief of the corps' regulatory division.

"In terms of permit processing and whether any change of the federal lead will occur for this project, everything essentially is pending," said Galacatos in a statement Tuesday to BenitoLink. "Right now, there hasn't been a decision to change the federal lead."

Galacatos provided no comment on whether a change of federal leadership could affect the current timeline of 18 months for completion of the solar-power plant planned for Paicines. The U.S. Department of Energy, according to previous reports by BenitoLink, plans to end eligibility for the federal government's business energy investment tax credit Dec. 31, 2016.

Last month on an episode of "Going Green!" with David Huboi, Panoche Valley Solar President John Pimentel addressed what the federal tax credit means for the proposed project: "This industry would not exist if it weren't for the tax incentives that were put in place by the state and federal governments," he said. "That tax credit was assumed in the development of the project, along with the pricing of the power in our power-purchase contract. It's not that greedy developers are enjoying the largess of the federal tax credit. It's a highly competitive environment. That tax credit benefit equals what is believed by a third-party consultant about a half-billion dollars in savings for the rate-payers of California."