Supervisor Mark Medina emphasized the importance of accurate and timely data for the system. Photo by John Chadwell. Board Chair Anthony Botelho warned that staff will have no excuses once the system is fully active. Photo by John Chadwell. Example of information about CSAs that will be available when portal goes live. Photo by John Chadwell.

The Stanford-created data system OpenGov could give residents and county staff greater flexibility at extracting information from departments. 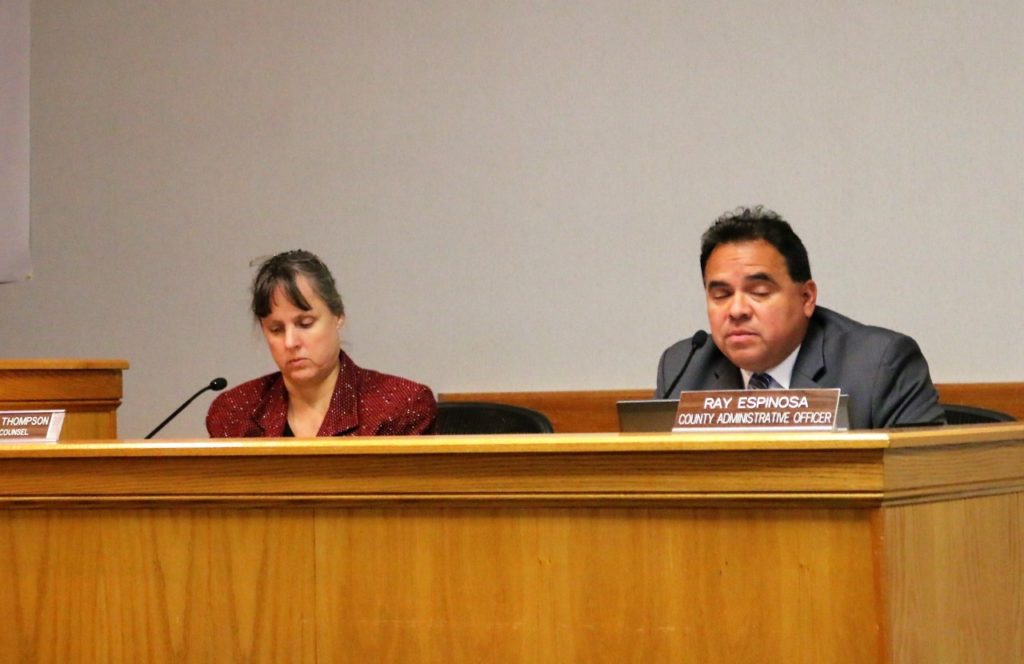 With little fanfare at a June 24 special meeting of the San Benito County Board of Supervisors, the county announced the launch of OpenGov, a public portal into its operations to promote transparency.

County Administrative Officer Ray Espinosa first explained OpenGov during a May 15 meeting. He said OpenGov will promote transparency for the public, county department heads, and the board of supervisors. It will give people the ability to extract information, he said.

“We had no central depository of the database where information was stored,” Espinosa said, referring to when he started working for the county eight years ago. “It was hard to put information into a budget, as an example, and the more important issue was extracting the information and understanding where we were at, and being able to project and move forward was difficult.”

Espinosa said San Benito County has made big strides over the last six years at improving how information is handled, and OpenGov is the latest step. Melinda Casillas, management analyst and successful candidate for treasurer-tax collector-public administrator during the recent June primary election, explained at the May 15 meeting that the auditor’s office had worked with OpenGov to provide data that she used to demonstrate the portal to supervisors.

Casillas showed information going back three years regarding budgets that demonstrated the differences between what was budgeted and what was actually spent. The data included salaries, services, supplies, fixed assets, and monies transferred to other funds. Through a series of graphs, she demonstrated how the public and county employees can gain a better understanding of how monies are spent by departments, as well as activities like as the number of incidents or emergency calls the Hollister Fire Department responds to.

Supervisor Mark Medina emphasized that the reliability of the data was key to the success of the portal.

“In order for this to work and for us to make decisions based upon the date entry, our staff members [need to] put in invoices and data in a timely manner,” Medina said. “This is great, but we have to go back to the basics and ensure this is done daily and the numbers are accurate because this will be on parade every day.”

“It’s almost real-time information as things get posted,” Gonzalez said. “If data is coming in to our system and being posted it will appear automatically.”

Espinosa further explained during the May meeting that when he first came to the county, all business was done on paper and information would often be lost or misfiled. He said staff is doing its best to enter information directly into the ERP system.

“We’re taking steps to get there, and the next step will be the next part of this meeting today,” Espinosa said, referring to the following agenda item concerning the Fiscal Year 2018/19 budget that would fund hiring more staff.

Board Chair Anthony Botelho responded that this was what the board wanted to hear, but warned Espinosa there could not be any more excuses why the ERP system was not implemented in certain departments.

“If we can’t get with the program those employees need to be switched out,” Botelho said. “We’ve invested a lot of money in this and we need accurate information to function the way we’re supposed to, whether we have the staffing levels we want or not.”

Espinosa said it also comes down to what systems the county can afford to pay for. Gonzalez added that staff had been able to upload many years worth of data from the old system. He said a former system the county used cost over $100,000 “to sit fallow,” compared to the OpenGov system, which he said was very inexpensive.

Botelho asked if information on County Service Areas (CSA) could be incorporated into the system. Casillas easily brought up a graphic showing the breakdown of CSAs, including Ridgemark. This has been a hot topic recently, as reported by BenitoLink, when the Ridgemark Homeowners Association challenged Supervisor Jerry Muenzer’s opinion that some $500,000 in the county service area account could not be spent on repairing roads within the development.

Espinosa said it would be a benefit to the county service areas because of their concerns about their accounts.

“That’s been a headache for us, to have information to the CSAs at any given time,” Botelho said.

Said Muenzer: “Hopefully, this will rebuild the trust with the public when they can go online and see their budgets, their CSAs, and see where the money is and where it’s going.”

Espinosa reminded the board that because of the county’s small staff it would still take time to build the system.

“We’re getting there,” Espinosa said. “A little more tweaking and it’s going to be a great asset to the community.”

The placement of political signs is regulated by state law and city ordinance.