A first-time novelist feels the sting from anonymous critics as she launches her book this weekend in San Juan Bautista. 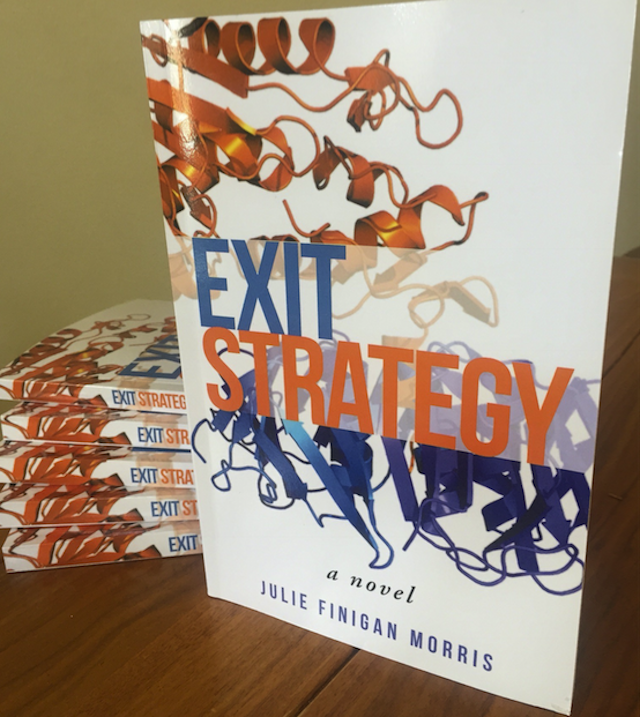 I ask people who read my first novel, Exit Strategy, for honest feedback. What novelist doesn’t want to know if her story resonates with readers? I think the goals of good fiction writing should be 1.) To entertain and offer an escape from readers’ everyday lives and 2.) To tap in to the human experience and allow your readers to exclaim, “Yes! I know exactly what that feels like!”

Art — in all its forms — is an accessible medium to express universal truths and share them with others. It’s a doorway to our collective consciousness. As a language and literature student in Florence, Italy in the late 1980s, I was so moved by the fresco paintings on the walls of churches that I started attending Mass again. In one church, San Miniato, which sits atop Piazza Michelangelo and overlooks the Arno River and glorious Florence below, Catholic monks practice their Gregorian chant in the afternoon. If you’re lucky enough to catch them, you stumble across a world-class concert with acoustics that rival Carnegie Hall. The music is a meditation, haunting and beautiful all at the same time. It was so beautiful, I cried. Song, painting, writing — all of these forms are the artist’s way of communicating what he or she has discovered along their own path.

Exit Strategy has several themes running through it: immigration, income inequality, corporate greed (not to be confused with capitalism, as not all corporations are greedy) sexual harassment, feminism, and liberation to name a few. Inevitably, there will be differing points of view and legitimate, thoughtful arguments as to whether or not I described the characters’ experiences well. I expected that. I am used to being edited, and even appreciate it. A good editor makes your writing tighter, more descriptive, better. My editor at Thomson Newspapers, Bill Sternberg, once told me that he would only run a column I had written after I could prove to him that “crockety” was a word (it’s not, I meant “crotchety”). I changed the word and he published it. Another editor, Dennis Taylor at McClatchy Newspapers, once told me that my job was to “peel the skin layers off an onion” if I wanted to really delve into my stories. That image remains in my mind when I am interviewing sources and trying to get to the core of a good story. Constructive criticism is a writer’s friend. It makes us better writers. The book has received praise from many people, which makes me happy. Those are the reviews I love to read.

Putting your writing out in the world opens you up for criticism, especially fiction writing because you’re no longer dealing with facts. A reporter can always turn to truth for a defense. In fiction, the story is just that: a story. The plot, setting and characters are part of the author’s imagination. Some readers assume fiction is autobiographical and mistake the characters for the author, people they know, or themselves.

Author Jami Attenberg recently wrote about this in her column titled, “Stop Reading My Fiction as the Story of My Life” in the New York Times:

"Like me, though, Ann Patchett is more wary of the question. “I have a real fear that the whole publication of this novel is going to center around questions of autobiography, which isn’t nearly as interesting as whether or not the book is any good,” she said of her novel “Commonwealth” in Literary Hub. “Most of the things in this book didn’t actually happen, but the feelings are very close to home. Or, as my mother said, ‘None of it happened and all of it’s true.’ ”

I expected constructive criticism. I’m eager for it so I can write a better novel next time. What I didn’t expect were the mean, personal attacks from anonymous critics. (I say ‘critics’ because I’m not even sure they read the book.) I can’t help but think these are the people who are offended by the story. I’ve definitely hit a nerve. Perhaps they are the readers who see themselves in the characters and instead of exclaiming, “Yes! I know exactly what that it is!” react with, “That bitch is talking about me!”

In one review I am accused of being “perverted, twisted,” (those adjectives may actually sell some books!) and exploiting families who have suffered from E.coli, even though I dedicated the book to those who have suffered through such tragedies. It could just be that they don’t like my writing. Fair enough. I can take the heat. I’m a big girl. Still, the negative comments feel more like mean Tweets than real reviews to me.  A one-star review on Amazon and Barnes & Noble won’t silence Stella’s story, or Ruth’s, even if they do sting a little bit. The haters diminish their own power by hiding behind faceless, anonymous posts like trolls on the Internet. Just as facts are a journalist’s best friend, universal truths are the novelist’s. Ann Patchett’s mother is right: “None of it happened and all of it’s true.”