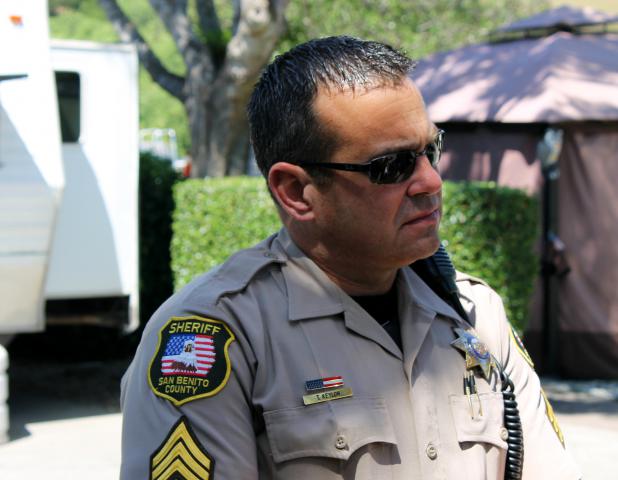 Working a 12-hour shift—writing tickets, assisting those in need, handcuffing criminals—would be enough for some. But Tom Keylon, 47, is heading toward retirement—and an educational goal.

Keylon, a sergeant with the San Benito County Sheriff’s Department, has five or six more years until he can retire from the career he has loved for 26 years. Meantime, he attends classes at Gavilan College with plans to transfer to San Jose State University and pursue a bachelor’s degree that he can utilize in retirement.

“A lot of guys take online courses, but I really wanted that (classroom) experience,” Keylon said, and added he’s considering working with youth as a drug and alcohol counselor. “It will be a lot different than protecting and serving, but I’ll still work with people. That’s been my lifelong thing, to help others.”

Keylon has spent his entire law enforcement career serving the people of San Benito County, both with the Hollister Police Department and the Sheriff’s Office.

“It’s been a great ride,” he said. “I always wanted to be a cop. My grandfather was, my uncle was and as far back as I can remember this is what I wanted to do. There have been ups and downs, but I don’t have a single regret.”

The love Keylon has for his job may be influenced by his positive attitude, an affection for his community and a certain approach he has as a sergeant—both toward his colleagues and those he contacts.

“I love to get out and work right alongside my guys,” he said. “I tell them, ‘Always strive to do the next right thing, and if you do that, you might mess up, you might make a mistake, but it’s going to be a small one and there will be very few.’ And that’s what we all do: we come out here and try to treat people with dignity and respect.”

Keylon’s amiable manner shines when patrolling the community where he works and has lived since 1991. Even when he’s off-duty, the sergeant—who has four grown children, including a set of twin daughters, and three grandsons—can be found out and about.

“I’ve gone to the grocery store and seen guys I’ve arrested, and no one’s ever given me a problem,” Keylon said. “I think in the past few years, officer safety has been heightened. We just didn’t have the violence back then that we do today. It’s heightened my awareness, but I’ve never stopped enjoying my community.”

Throughout his time in San Benito County, Keylon has learned to deal with the difficulties that come with a career in law enforcement. Aside from the inherent dangers of the job, officers must figure out how to cope with the situations they see every day.

“I’ve dealt with a lot of death, everything from babies to mommies to the elderly,” Keylon said. “There’ve been situations where I’ve gone off duty and thought about them. But you have to come to a decision: Do I let this keep eating at me? I’m not callous to it, I feel it and there are things that have bothered me. But they haven’t destroyed me. It’s just made me want to do my job even better.”

Something Keylon gives a lot of credit to the Sheriff’s Department for is After-Incident Briefings, which he said began about 10 years ago. Following any major event—from multiple-fatality crashes and shootings to officer-involved incidents—all medical and fire personnel, dispatchers and law enforcement gather in a conference room to discuss it.

“I’ve seen every bit of emotion you can imagine and I’m an advocate of that,” he said. “Cops tend to hold things in and some of us think ‘I’m not going to let my partner or cop friend think I’m weak.’ By being a mandated critical incident debriefing, you have no choice but to go. I’ve seen it open people up and it’s affected me personally.”

Keylon also attends the Sherman Block Supervisory Leadership Institute, a program designed for law enforcement supervisors to gain further knowledge in personal growth, leadership and ethical decision-making. He goes to Concord to attend class three days a month for nine months, along with 24 other police sergeants from around the state.

“One of the books talks about how much departments put into the physical structure of the job, what it takes to do the job, but very little about the emotional survival of the job,” Keylon said. “And if you think about it, it’s true. There’s not much emphasis on ‘Hey, how are you doing?’ or ‘How did that affect you?’ It’s more about safety and physical endurance, but sometimes it’s the emotional stuff that kills cops.”

Keylon said the job comes with great moments that triumph over much of the negative, including a mountain lion call he responded to in the hills around Hollister years ago. Once he arrived “on scene,” the caller let Keylon know he’d have to jump on a quad to go any further. In full uniform, Keylon said he hopped on the four-wheeler and headed into the hills.

“Where else can you do that kind of stuff?” he said. “I have the best job in the world.”

It’s a rewarding job, according to Keylon, that includes being everything from a protector and arrester, to a therapist.

“I’ve had people tell me their deepest, darkest secrets and I couldn’t believe they were telling me,” he said. “But you just listen. After all this time I’ve come to the conclusion that people just want to be heard. We have to treat people like their problem is the most important problem in the world, whether it’s a stolen bike or assault, because for them—in that moment—it is.”

Keylon, who lives in Hollister with his girlfriend of six years, also finds stress relief in camping, traveling, playing video games online with friends and laughing. “Humor is a big part of release” even in the toughest of situations, he said.

And facing those situations is made easier when you love your job, your community and your colleagues—all of which Keylon does.

“I see our department doing something that makes people want to be here,” he said. “When you get guys who are eager to work for you—we don’t make as much money as some of the bigger departments—but they want to work here, that tells me something about camaraderie. We’re a family working together and we all want to be here.”