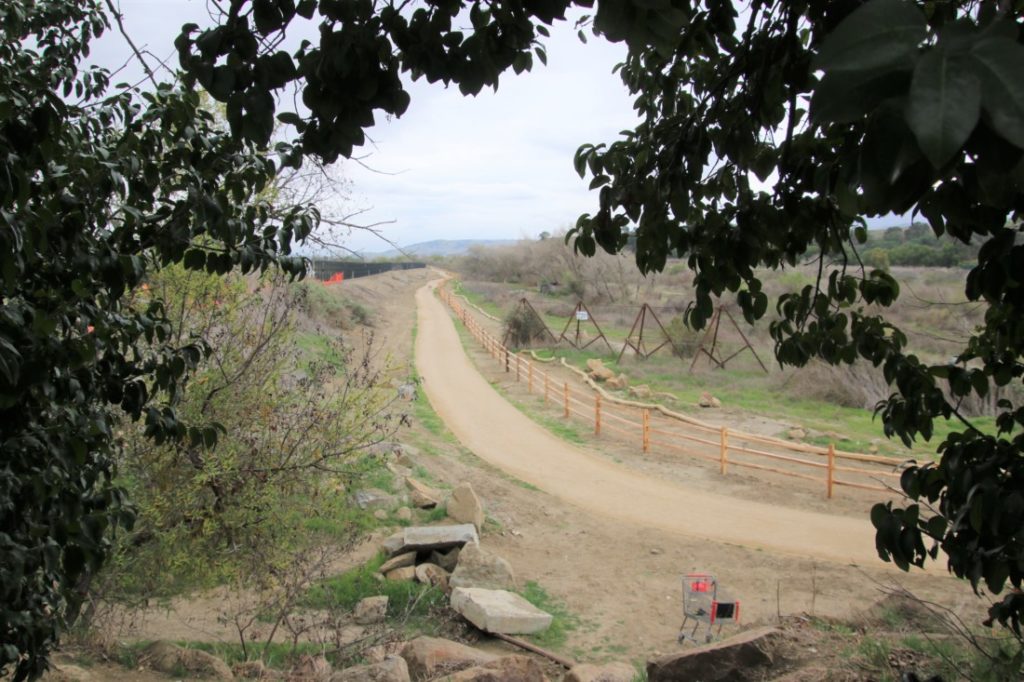 The Apricot Lane section of the River Parkway Trail will officially open with a ribbon cutting April 10. Photo by John Chadwell.
×

Sometimes stubborn dreamers get the reward of fruition. Planned in 2010, Hollister residents now have the chance to stroll along two segments of the ambitious River Parkway Trail.

The first part of the trail to be finished is a 1.1-mile section at the end of Apricot Lane. The other part of the trail is where the proposed 70-acre Regional Park will one day be built near San Benito High School that has a series of rough, unfinished trails.

But Valerie Egland, president of R.E.A.C.H., said the nonprofit has big dreams and its “mantra” is the trail should instead go from Pinnacles National Park to the Pajaro River Watershed area.

There will be a ribbon cutting for the Apricot Lane portion of the trail on April 10 at the gazebo in Apricot Park, according to Tina Garza, Hollister recreation supervisor.

The wide trail that wraps around the city’s industrial wastewater ponds represents the first leg of the River Parkway trail system. It’s also the first part of the proposed Regional Park that planners hope will provide recreational opportunities for hikers, bicyclists, equestrians, sports enthusiasts and families.

Egland served on the San Benito County Planning Commission and the Parks and Recreation Commission for three years each, and has been a member of R.E.A.C.H. since its founding in 2012. That was when the parks commission wrote the first master parks plan included in the San Benito County General Plan that features language about the proposed San Benito River Trail, as the River Parkway Trail was called then.

Egland said R.E.A.C.H. was created to raise funds for parks and the parks commission, which submitted a draft of the master plan for Regional Park and the River Parkway in June 2013.

“To this day it has not been approved for inclusion into the General Plan,” she said. “However, the EIR [environmental impact report] was done, but is now null and void because nothing happened because of a lack of county will. I can’t fault the county, however, because there is just no money.”

Egland said the design of the River Parkway was split into three sections—the Historical Park to Hospital Road, then to Union Road, and finally to Fourth Street—in the San Benito Riverbed just above the floodplain. One of the difficulties in creating the trail through the river is that private property rights extend halfway across the riverbed because it is not a navigable river.

Robin Pollard, R.E.A.C.H. secretary treasurer, said it was exciting after so many years to finally see the River Parkway Trail about to become reality.

“What begins as a patchwork of the trails will hopefully be the push to connect more and more sections, with the benefit of improving the health of our river, as well as bringing wellness to people of Hollister and San Benito County,” she said. “Trails like these in other communities have proven to be economic drivers for their areas. It stands to reason a completed trail would be a draw for tourists as well.”

The planning process began in 2008, according to the 2013 draft master plan. An advisory committee was made up of members of the Hollister City Council, the San Benito High School District, and various community, economic, and transportation agencies that conducted workshops to glean suggestions and ideas regarding goals, concepts and park uses.

According to the master plan: “A key feature of the River Parkway Focus Area is a proposed regional park. San Benito County is presently in negotiation to acquire land from the San Benito High School District and private landowners to develop a new regional park. The proposed park site is located between the San Benito River and the new River Parkway bypass around San Benito High School. A broad range of park uses are proposed for the Regional Park site, including a community center, outdoor amphitheater, swimming pool, softball fields, basketball courts, a playground, and other active recreation amenities. Park trails, educational gardens, an orchard, shade trees, and a picnic area are also proposed for the park site.”

Benny Young, San Benito County Resource Management Agency (RMA) director, made a presentation before the Hollister City Council March 15 to outline the county’s plans to develop the Regional Park and ask the city for assistance and requested that the city council authorize and schedule its public hearing to permanently vacate the north half section of Nash Road as soon as possible, preferably in April of 2021.

The presentation did not go well after Councilwoman Honor Spencer challenged the wisdom of permanently closing Nash Road and then Councilman Tim Burns asked Young if he had a “Plan B” if two grants the county would be seeking to fund the park did not materialize. Young admitted he did not actually have a backup plan, but hoped the board of supervisors would support an alternative funding source. John Corrigan, president of the high school board, Superintendent Shawn Tennenbaum, and a number of residents and students spoke in favor of closing Nash Road and the land swap.

Councilman Rick Perez was concerned about older residents who live near the school who might need fire or police service that could be delayed if the road were closed permanently. There were enough doubts about the wisdom of closing the road and public safety issues that the council simply stopped talking, did not vote on the resolution, and did not give Brett Miller, city manager, any directions about what to do next.

BenitoLink reported on March 10 that when the county acquires that property, it will also take ownership of 6.4 acres of street right-of-way for the River Parkway bypass and part of San Benito Street. The county also owns the neighboring property east of that area along San Benito Street, which is part of the Regional Park plan.

Egland told BenitoLink the original design for the Regional Park has been scaled back drastically from its initial conception, primarily because of a lack of funding. BenitoLink found that there are only a few meandering unimproved trails where the Regional Park will be located that go out from San Benito High School and circle back to provide a semblance of country hiking.

“What’s nice about that, when you go down there you can’t see the city,” she said. “To the east you see Santa Ana Peak and those hills, and to the right you see Fremont Peak and the river. As time goes by, they should be developing according to public input, according to the needs of the community. There’s really no place around Hollister that families can go to enjoy the outdoors and low-cost activities.”

There are a number of homeless encampments scattered throughout the riverbed as the county continues to struggle to find money to help them, as well as improve roads and parks. There has never been enough money to meet the original design with all its amenities. The estimated cost of building the Regional Park alone was between $37.2 million and $41 million.

Brigantino Park, located along Fourth Street across the river from the proposed trail, is not considered part of the overall plan. But there have been talks at City Hall of linking it to the trail with a footbridge or even a road crossing the riverbed. Young mentioned during the council meeting that the county hopes a second grant would pay for such a bridge that would belong to the city. He also said there are plans to build a roundabout at the intersection of the River Parkway bypass and San Benito Street.

The Hollister City Council has expended time and money to come up with designs to build a premier park at Brigantino Park to include multiple softball fields, soccer fields and other amenities that would cost over $40 million. As with the Regional Park, though, these plans too have had to be scrutinized and are, at this time, considered extravagant, according to Mayor Ignacio Velazquez.

The original estimated cost of the San Benito River Parkway was $15 million-$18 million. The Apricot Lane Trail, however, was paid for with a 2018 community block grant of $2.3 million ($1.77 million for the trail, $210,000 for Meals on Wheels, $291,000 for Community FoodBank of San Benito County, and $100,000 for geologic hazard mitigation planning) that retired city program manager Paxton secured.

“The grant money that Mary Paxton got was to support getting kids out to parks through the creation of trails,” Egland said. “That is a very big project and I laud the city for getting it through.”

Paxton said Hollister was previously awarded a grant for the River Parkway Trail with a trailhead on the south side of Apricot Lane, but it did not happen because a property owner would not negotiate the purchase.

“The new Apricot Park made it possible to apply from a different funding source with the trailhead at Apricot Park,” she said.

Former councilwoman Luna, an early supporter of the project, said “While some people cannot afford to go to a gym for health activities, a most rewarding experience is taking a walk and this River Park Trail will allow the residents the opportunity to enjoy nature and participate in outdoor fitness. It will serve as a link between people and the natural environment.”

Luna went on to say, “San Benito County has the most beautiful landscaping walking areas in and around parks and neighborhoods, and now our residents can enjoy a walk or a bike ride in a peaceful and pressure release healthy activity. Many of us worked hard to plan for this trail, and I personally know that many people will enjoy it and hope that someday the trail will go further south into other neighborhoods.” 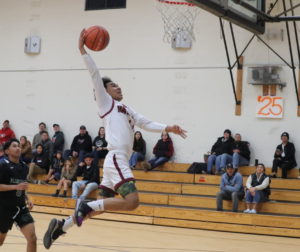 After a decisive victory over Pajaro Valley, the team aims to keep its momentum. 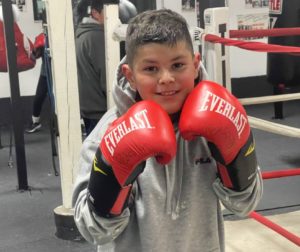 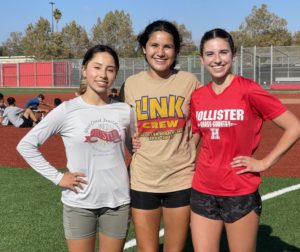