The Aromas-San Juan Unified School district is in good shape, but there's plenty of room for improvement. 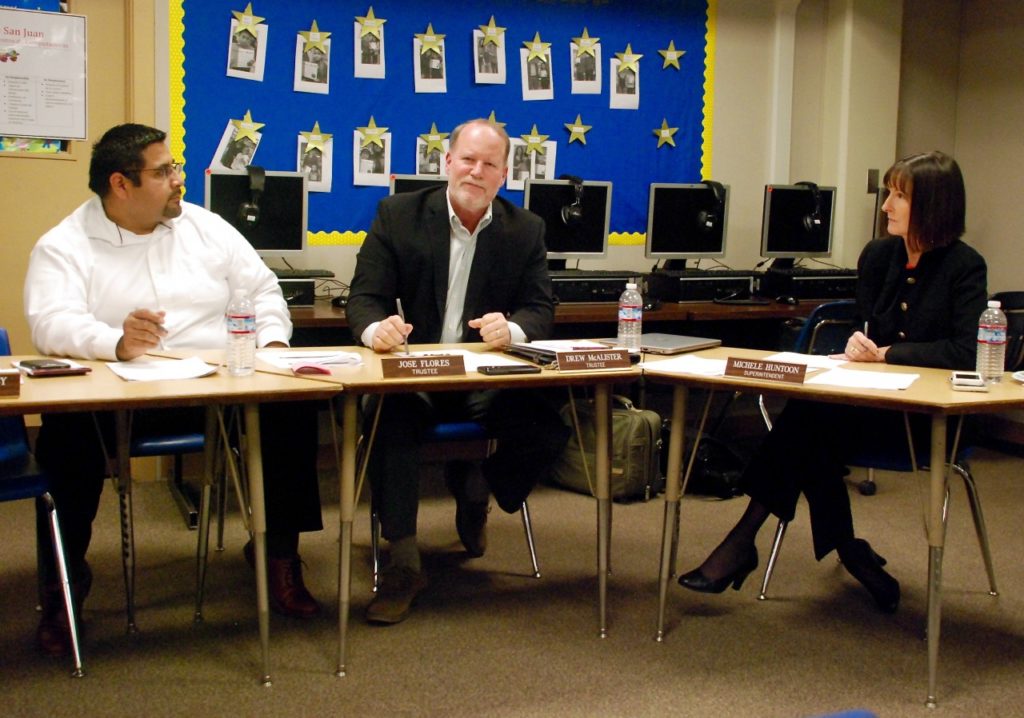 Drew McAlister, center, president of the Aromas-San Juan Unified School District board of trustees, talks to those attending the State of the District meeting Wednesday night at San Juan School. At right is Superintendent Michele Huntoon. At left is trustee Jose Flores. The Aromas-San Juan Unified School District is in good shape, but there’s much room for improvement. That’s what parents and students were told Wednesday night at the State of the District Meeting at San Juan School in San Juan Bautista.

The meeting, called by the district board of trustees and its superintendent, was one of two held this week. The first one was held Tuesday night in Aromas.

Teachers, students and parents had a chance to weigh in on their views of the district as well, following the report.

District board president Drew McAlister said the district, while not flush, has moved from a reactive mode during the last decade to a place where it can start to plan for the future again and decide where it wants to be.

The second interim report on state funding is due on March 19.

The district receives most of its funding from local property taxes, which means it is a basic aid district.

Superintendent Michele Huntoon presented a powerpoint presentation on the district’s five goals and how its students scored on the state’s education test. There is a need to improve English and math scores, she noted.

“We need to pull back the curtain to see what we’re really looking at,” she said of the data.

“We’re in a place where we have a lot of room for growth academically,” said board president Drew McAlister.

Trustees commented on what inspires them about the district, their concerns and their dreams for the district’s future.

Trustee Jose Flores said he’s inspired by teachers, staff and parents. “We do it all for the love of our kids and our community,” he said.

Trustee Jeff Hancock said: “What inspires me is the synergy of how students and staff and parents are working together for the same end — the best education for all of our children.”

Trustee Jennifer Colby said she is inspired by the district’s teachers. “I think we have incredible teachers and the teachers really care about our students.”

She said the district’s high school students are critical thinkers and ready for college. And she said the K-8 middle school provides a great place for learning with high-quality programs.

Trustee Monica Martinez-Guaracha has three children attending district schools. She said she’s inspired by the community and all it has accomplished through parent help.

On the issue of district concerns, Flores said he’s concerned about district funding and getting more parent involvement.

Hancock said he’s concerned about the board not being open to other opinions about the way the district operates and educational issues.

Martinez-Guaracha said she’s concerned about technology: having the right computer hardware and preparing students for what’s coming in technology.

Colby said funding is a concern. She said the state does not fund the district on the level that is needed. She said she’s also concerned about the economy and affordable housing. There are internal district challenges as well, she said, regarding conflicting ideas concerning student needs. Equity and equality of education, she said, is another one of her concerns.

McAlister said his concerns are meeting the needs of the entire community and preparing students the best the district can for their future. He said family engagement is critical. And, he said, the district needs room for growth and “an environment where respect is the norm.”

As for their dreams for the future, Flores said, “I just want a blank check,” adding that he knows that won’t happen. Increased enrollment and higher scores on performance tests are among his dreams.

Martinez-Guaracha would like to see a swimming pool built at Anzar High School. She said computer hardware all needs to be in working order all the time.

Colby said an executed curriculum strategy is needed along with indentifying outside resources for teachers’ professional development. Bringing up math scores is among her goals, as well as using gardens and wetlands for hands-on experience.

McAlister said he’d like to see the district become a destination district, one that attracts students from outside the district. More parent support and district pride are also among his dreams.

Hancock would like to see the arts returned to the district curriculum.

The meeting then moved on to allow parents, teachers and students to express their inspirations, concerns and dreams. They wrote down their thoughts on yellow post-it notes, which were pasted on mounting boards.

They broke off into three groups. They were for inspirations, concerns and dreams. A trustee met with each group and took notes as the notes were read.

A group of students from Anzar High expressed concerns about non-working computers and not enough coaches to help students with their grad-ex projects. crowded classes also were a concern.

There were questions raised during the exercise about homework policies, using San Juan Bautista city facilities and effective communication.

Hancock urged those attending to write down things the district can to better and send them to the superintendent.

At the end of the meeting, McAlister said, “Hopefully, we’ve found something to be proud of about our district.”