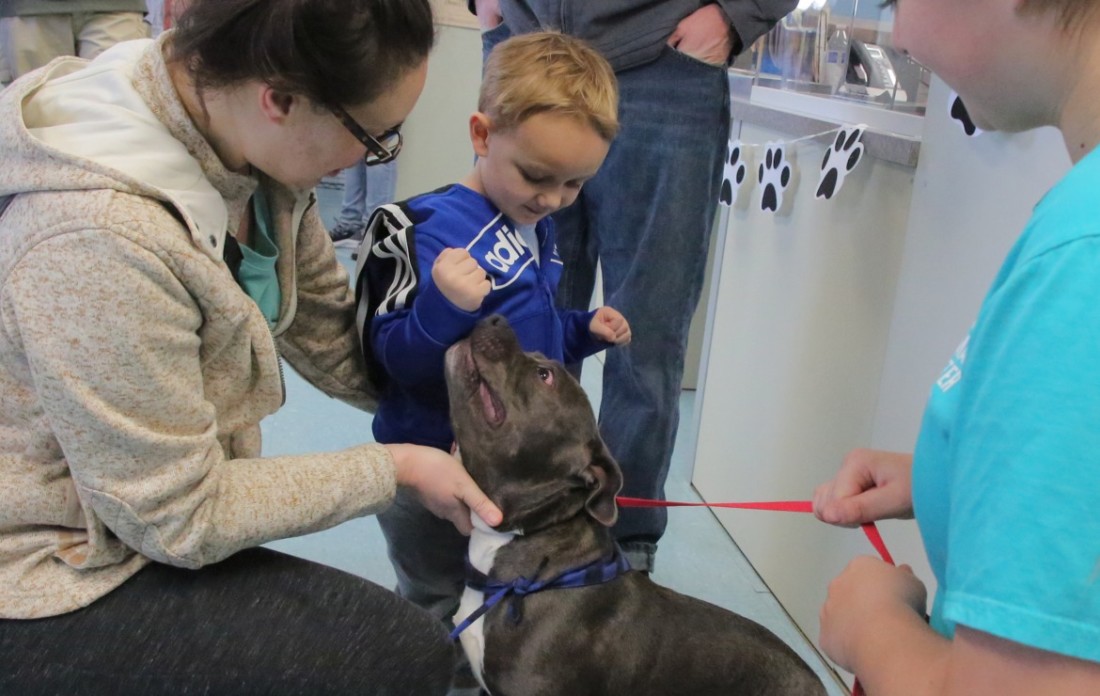 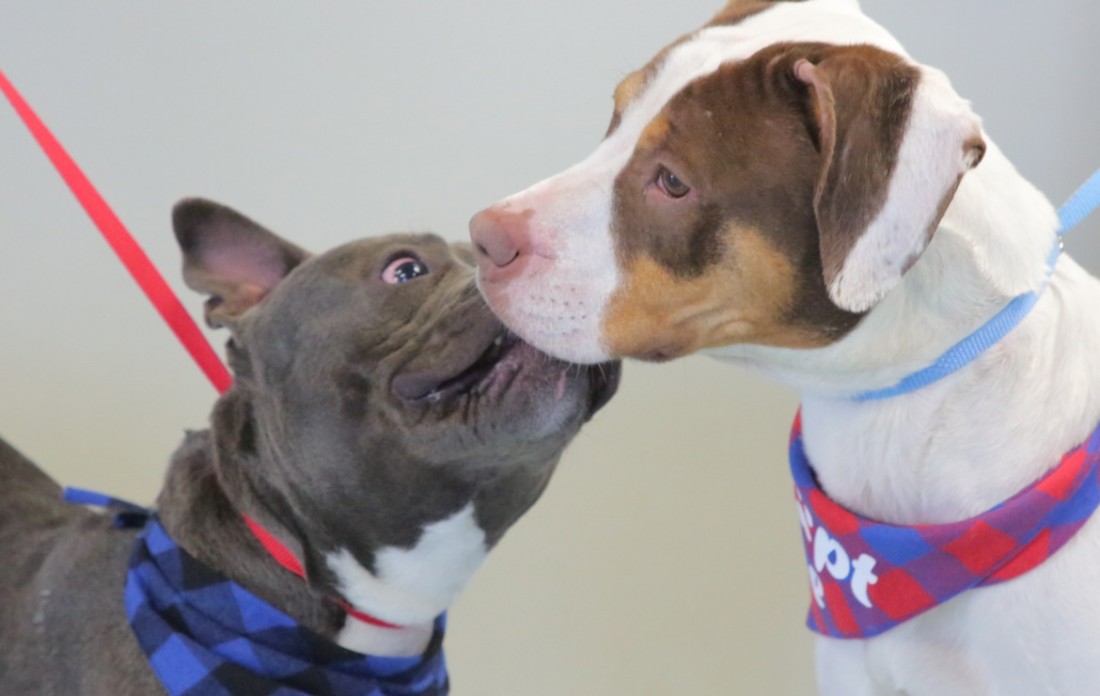 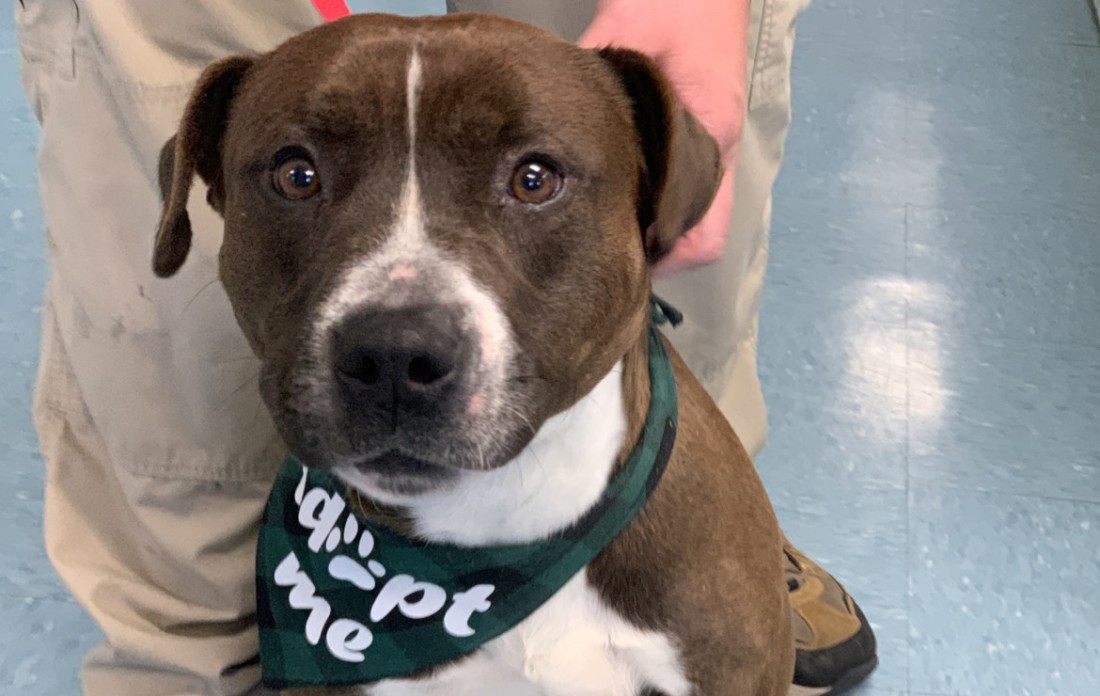 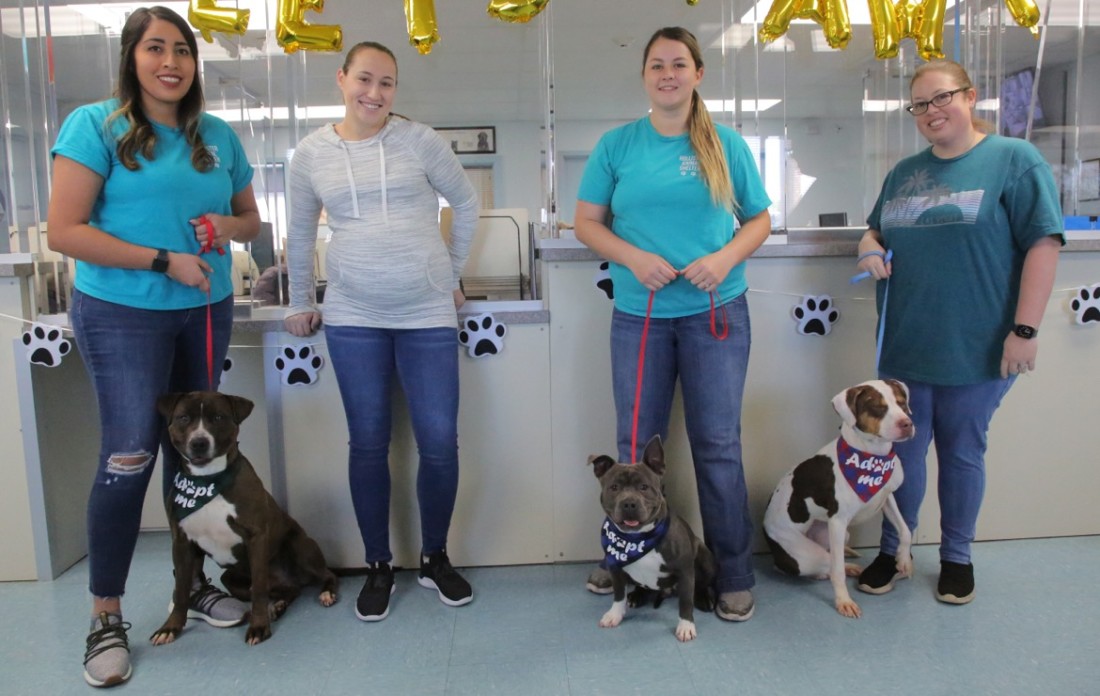 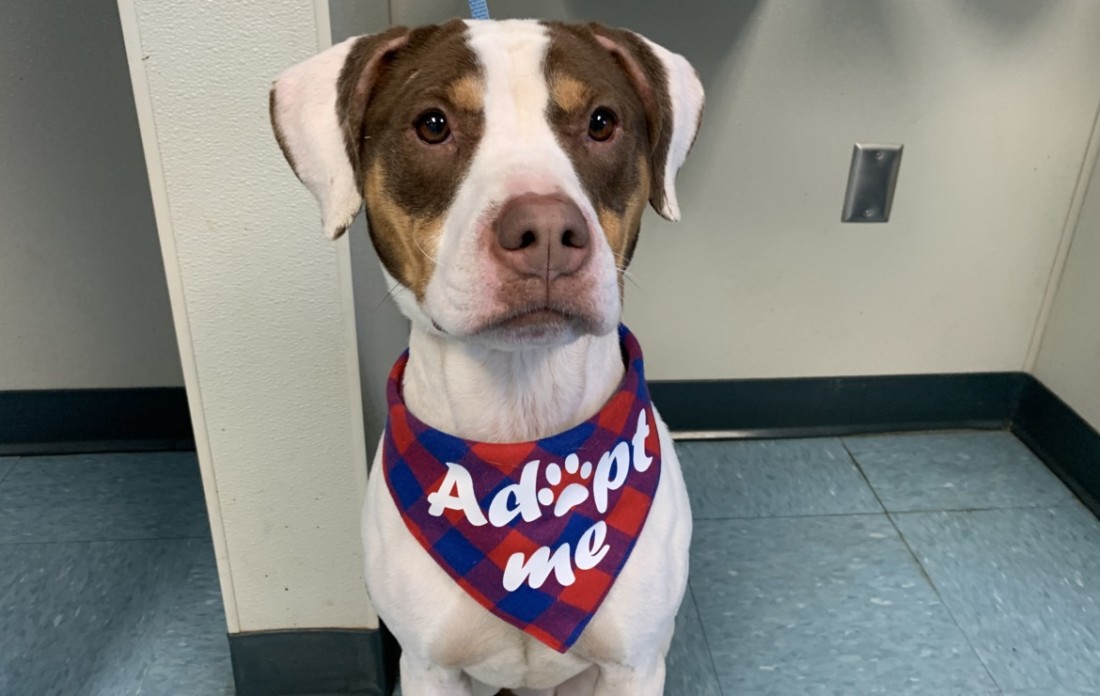 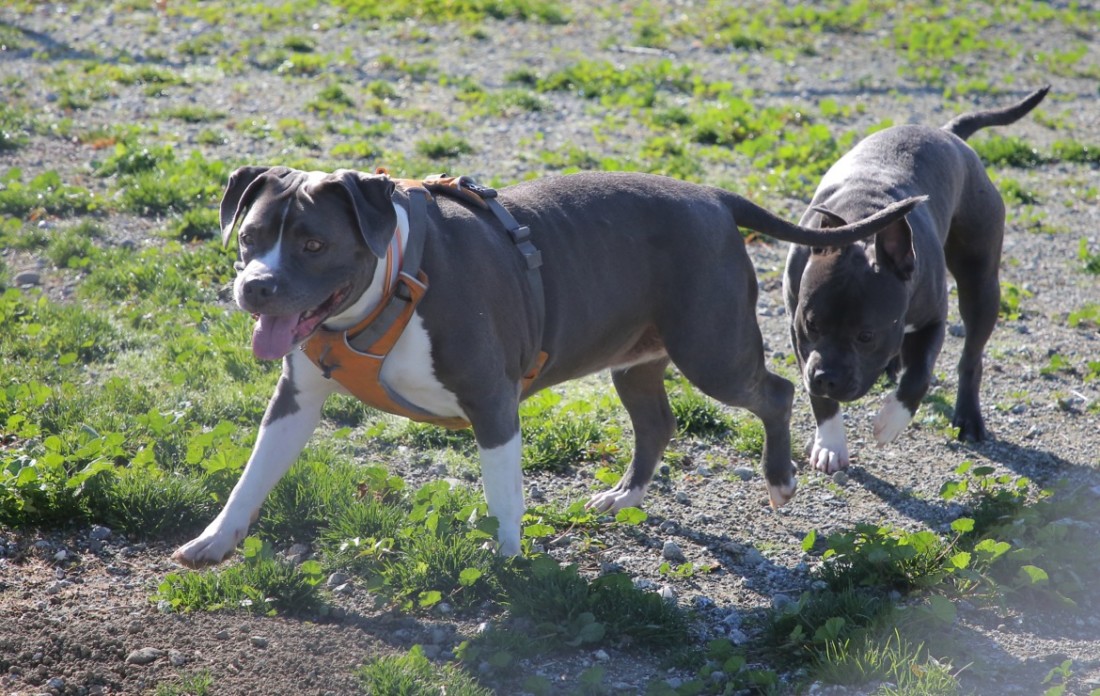 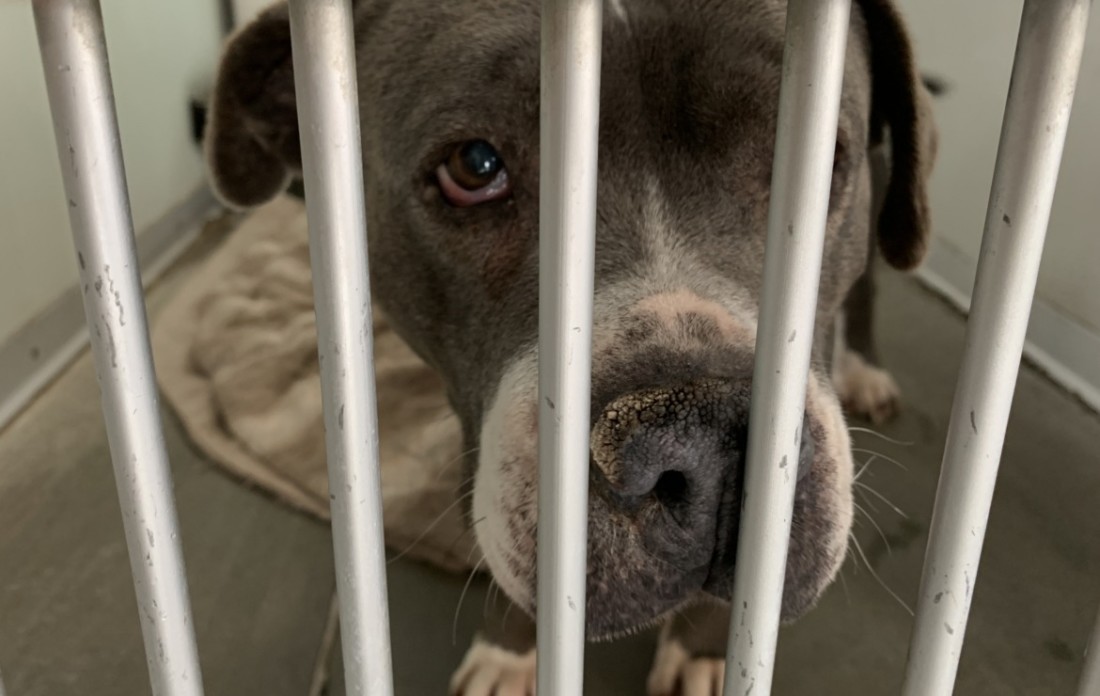 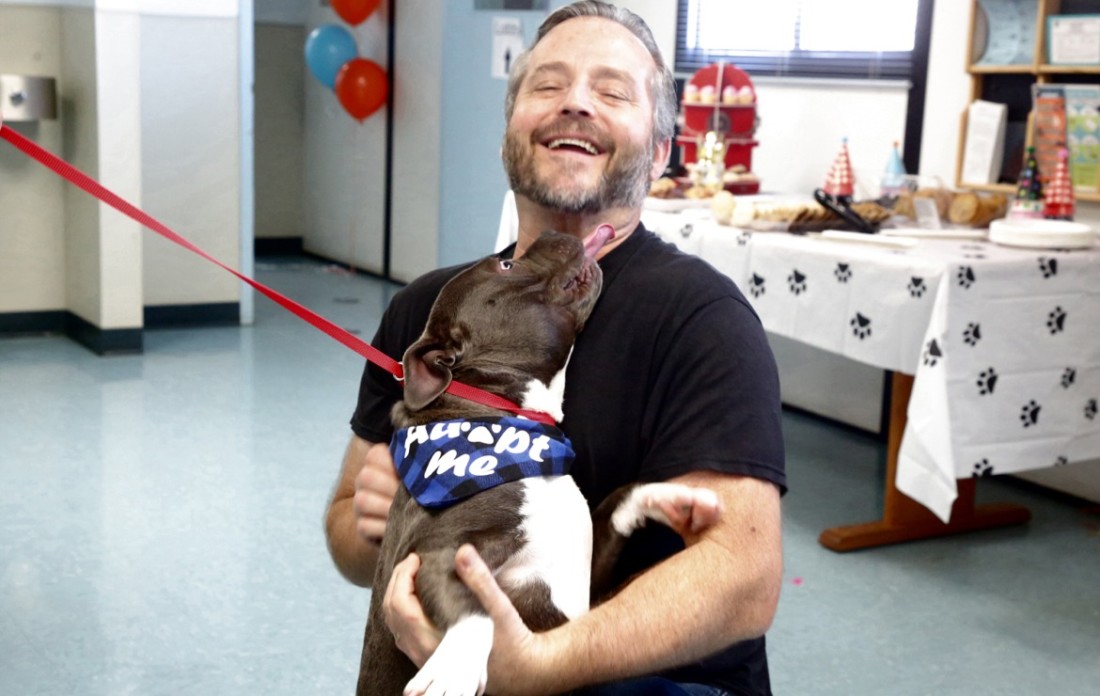 When Tony Katshen showed up at a recent dog adoption event, he knew exactly what he wanted: a one-and-a-half-year-old pit bull named Nacho.

Katshen was the first one through the door at the recent “Pittie Party,” a Hollister Animal Shelter event for people looking to adopt pit bull dogs. And Nacho was there waiting to meet him.

The two took to each other instantly. Nacho rapidly licked Katshen’s face and his prospective owner wrapped the dog in his arms. A few minutes later, as part of the adoption screening, Katshen introduced Nacho to his other pit bull, Sophie, and the two of them ran around playing as if they had known each other all their lives. Nacho, one of 22 dogs at the shelter up for adoption, had found a new home.

Kara Ells has been the shelter’s director for three years, but this is the first time she’s held an adoption event just for pit bulls. Out of the 22 dogs available, 13 of them were pit bulls.

“We do tend to see a pretty good trend with pit bulls coming in,” Ells said. “They may be strays or owner surrenders. We really struggle to find them homes because landlords have restrictions on certain breeds or big dogs, and there are also misconceptions about the breed we would like to break down.”

Katshen had seen Nacho on the Hollister Police Animal Care and Services’ Facebook page and had no hesitation in coming to adopt another pit bull.

“We had been looking for another dog and this one looked just like the female we had,” he said. “I have had a few mixes over the years and they have always been super dogs. They are a really great breed of dog, they have a lot of energy, and they just want to please you.”

Ells agreed and said pit bulls are “big huge love dogs, goofy clowns; friendly and super happy just to be goofs.” But pit bulls do come with special requirements. Like any dog, Ells said, they need structure and love.

“They are bigger and stronger than some other dogs you might take home,” she said. “They are goofy; they just sometimes do not know their own strength. That is why good training is important.”

Potential owners are required to fill out a questionnaire to establish their ability to care for the dog and whether the pit bull breed is appropriate for them. Applicants are asked if they already have a veterinarian and if they’ve had a dog before.

The type of home is also important. If the dog is going to live in an apartment building, the shelter will check with the landlord to be sure the dog is allowed. There are some concerns posed, including “do you realize you might need to housetrain your dog” or “what will you do if your dog chews on furniture?”

The Hollister Animal Shelter is the only all-intake center in San Benito County, so it’s home for a variety of animals. Young dogs like Nacho are easier to place than older dogs like Henrietta, a 10-year-old pit bull mix.

The shelter can house up to 40 dogs at a time, though at times it’s had as many as 80. Some dogs that don’t get adopted go to a breed-specific rescue organization, while others head off to foster owners.

Ells said few animals have to be euthanized because of a lack of space—a big change from when animal control officers euthanized over 1,400 animals that came through the shelter in 2016.

At the Pittie Party, visitors bonded with dogs and some looked well on their way to a good home. While pit bulls might be harder to place compared to other breeds, that was not a problem for the Abbott family who came hoping to find a dog their two-year-old son Gunnar would bond with. Kristen Abbot, Gunnar’s mother, summed it up.

“Pit bulls are strong, but they are good family dogs,” she said. “They are all love.”