A large crowd showed up at the Veterans Memorial building Memorial Day to honor all veterans and 19 current active duty service members. 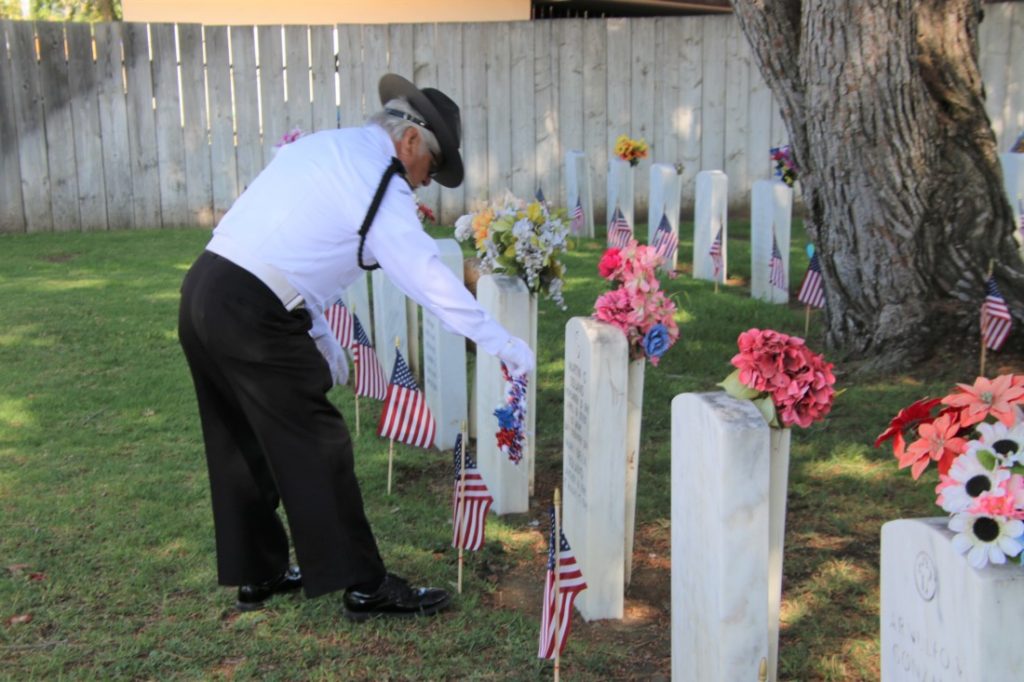 Wreaths and flowers were placed at headstones of veterans buried in Calvary Cemetery. Photo by John Chadwell. 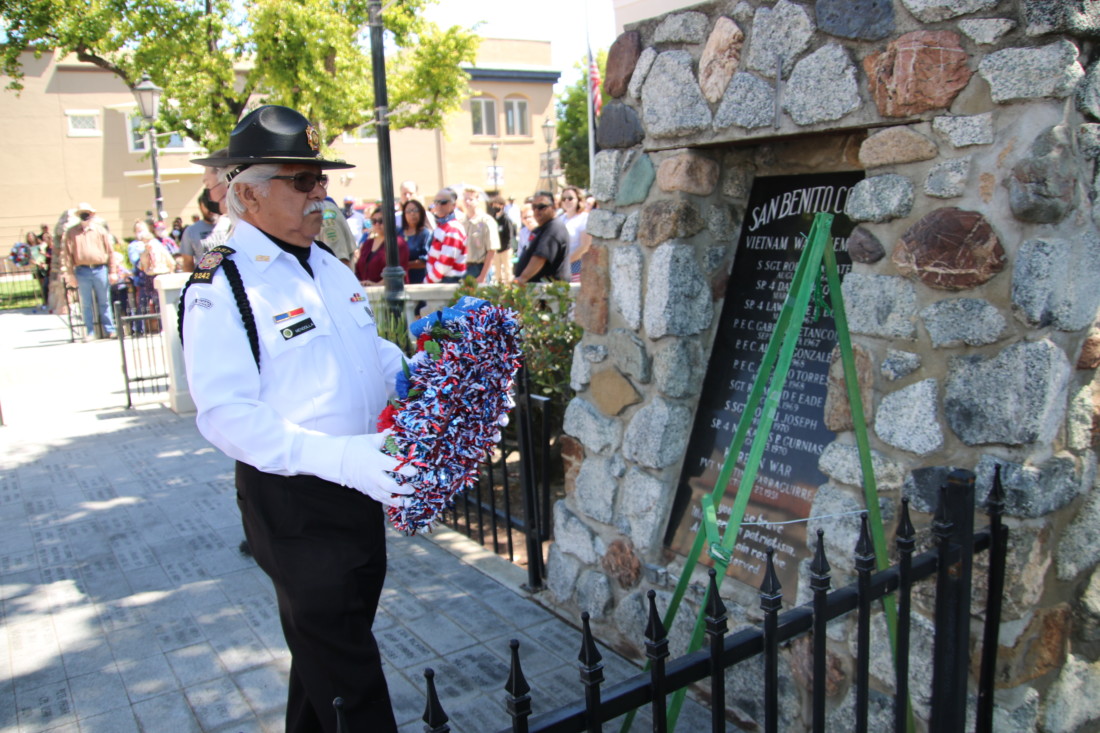 Laying of wreath at Vietnam memorial in front of Veterans Memorial building. Photo by John Chadwell. 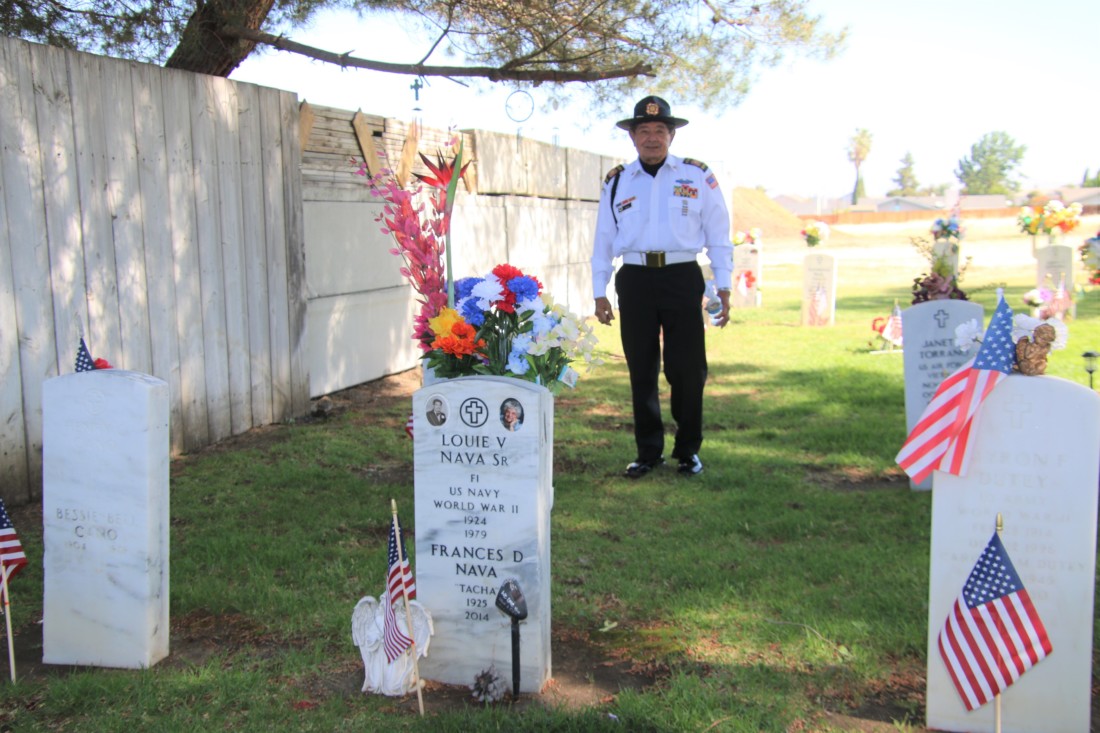 VFW Post 9242 Commander George Nava stands behind his parents' grave on the site where he plans to join his comrades one day. Photo by John Chadwell. 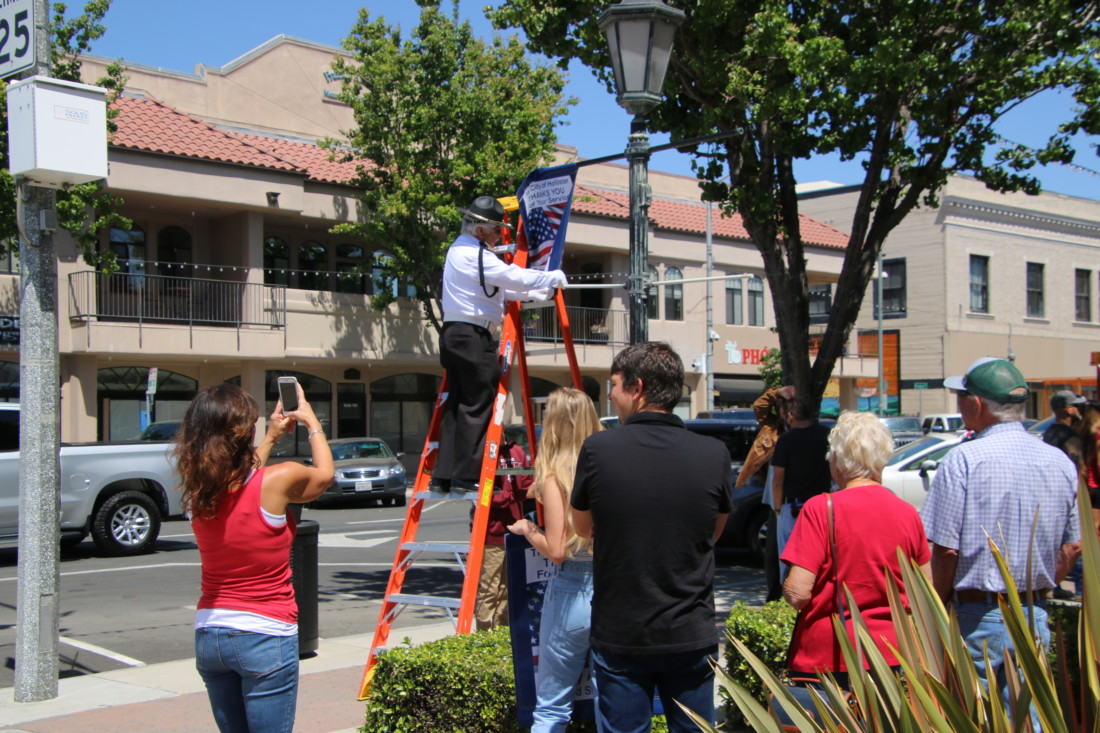 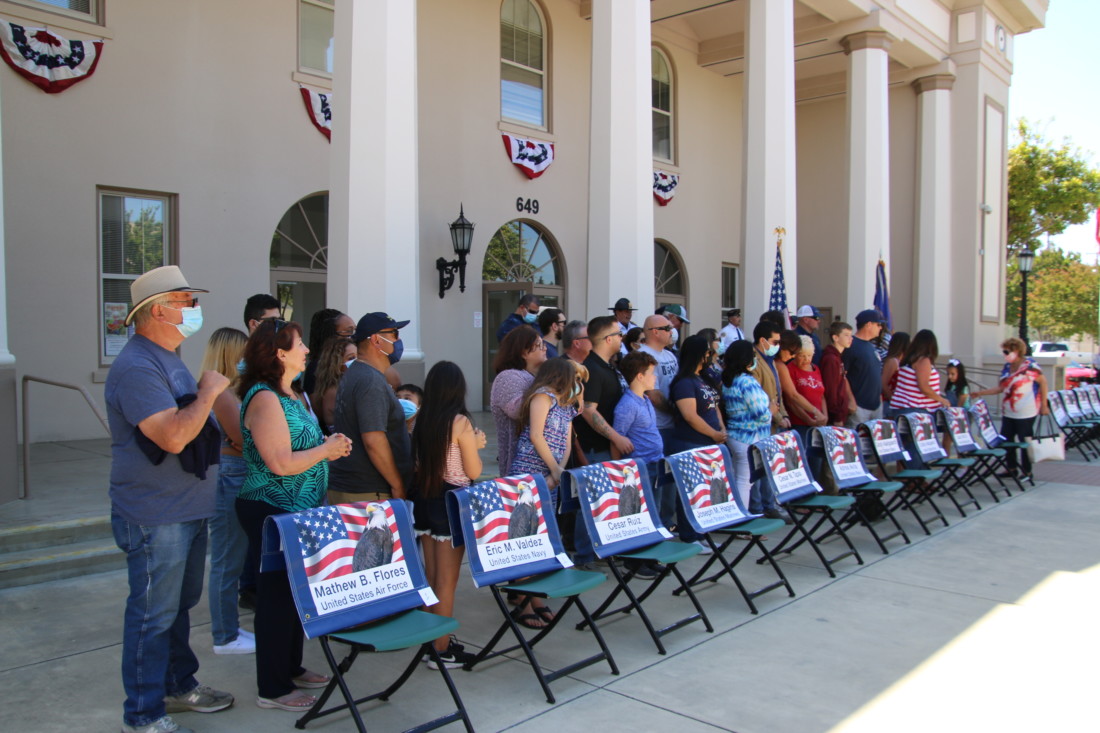 Families and friends gather behind banners. Photo by John Chadwell. 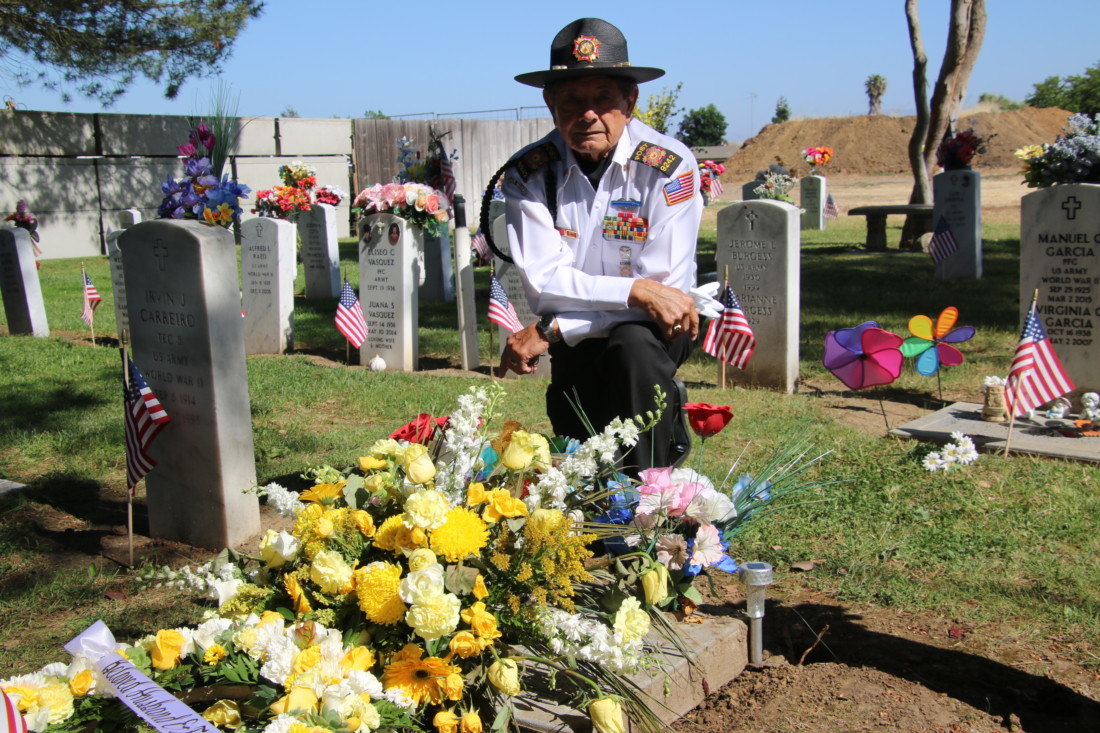 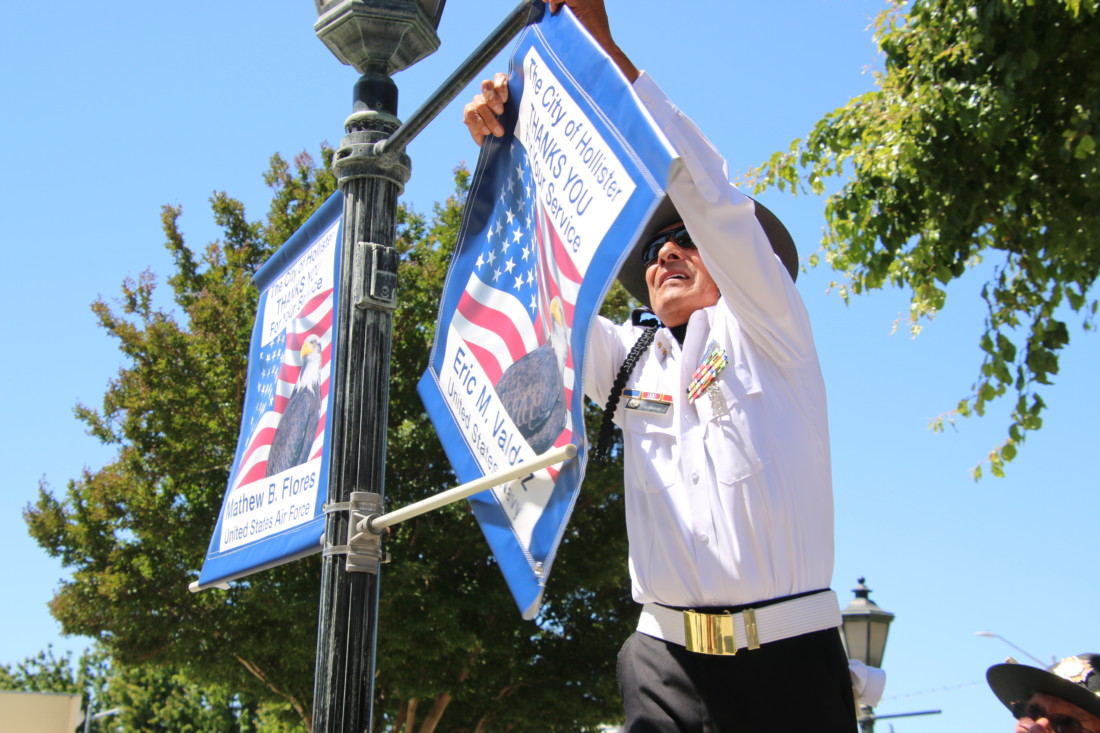 Memorial Day is special to every veteran, but Memorial Day this year was particularly poignant for George Nava, commander of Veterans of Foreign Wars Post 9242 in Hollister. Just three rows over from where he stood May 31 in the veterans section of Calvary Cemetery lay his good friend, Dan Carreiro.

“We do this every year and this year I’m honoring gold star families plus a special honor for Dan Carreiro, the first person from Hollister that I met in Vietnam,” Nava said. “We buried him here Saturday.”

He said the VFW post commemorates the day by placing wreaths and red, white and blue flowers next to several headstones. After the brief ceremony, a gun salute and taps, the veterans went downtown to conduct an expanded version of the same ceremony which included laying 10 tiles that relatives of veterans had purchased to honor their family members who had passed away; the gun salute and taps; followed by the naming and honoring of 19 residents who were presently serving on active duty.

After the ceremony, one VFW member would join each group of families and friends to raise their service member’s banner in front of the Veterans Memorial building, where they will remain as long as the person is on active duty.

Out of the 19 service members being honored, there were two sets of siblings, Cassidy and Colby Aalgaard, and Michael and Iean Parker.

Larry Brown, assistant scout master of Scout Troop 400, was at the ceremony with a large contingent of Scouts and family members of the Parker brothers.

The banner program began in 2014. Banners are hung along San Benito Street and side streets downtown. They are paid for by donations.

After the ceremony in Calvary Cemetery, during a moment of slightly off-kilter humor that only a fellow veteran might understand, Nava showed BenitoLink his parents’ gravesite as he stood behind it in an empty plot between two other veterans’ graves.

“This is mine, bought and paid for,” he said. “It’s good to know when the time comes, I’ll be here with friends.”