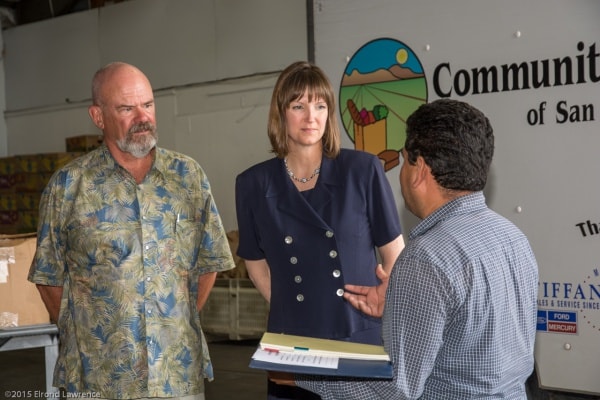 The following article, an interview of Mark Paxton by Elrond Lawrence, is reprinted by permission of The Community Food Bank of San Benito County

“We’ve got so many exciting stories to tell here, and I want more people to know about them,” said Mark Paxton, the new Community Engagement and Fund Development Director for the Community Food Bank of San Benito County.

Paxton, a veteran local journalist, assumed the duties of the newly created position on July 15. He quickly learned that a) the Food Bank does much more than feed four thousand residents a week, and b) no two days will likely be the same.

In the new role, his chief responsibilities are to build relationships between the Food Bank and its surrounding communities by attending meetings and events, increasing the Food Bank’s visibility through storytelling and social media, and helping residents better understand its uplifting mission.

“Feeding people is about as bedrock fundamental as you can get,” he recently explained. “It’s exciting, it’s joyful. This is a really happy place.”

Paxton’s mission is to open the eyes of county residents to all of the Food Bank’s outreach programs: helping people get into the state’s CalFresh food assistance program, delivering food to shut-in residents, and continuing the “backpack program” that sends hungry kids home each Friday afternoon with a bag of food to ensure they have nutritious food through the weekend.

Paxton has spent much of his life as a journalist in Hollister, working his way up from a reporter to editor of the Hollister Free Lance, then making a change to teach English Literature at San Benito High School, where he also discovered a knack for grant-writing. From there he worked for Educational Data Systems as a project manager, evaluating a state project called “Reading First” and other literacy initiatives. For a year he traveled north to study in Washington State; in addition to his degree in Communications, he now holds an associates’ degree in traditional wooden boat construction.

“I’ve always been sort of a habitual do-gooder,” he notes. “I like tangible things. So many of us in the 21st century go to work and produce things that are intangible. I really think it’s a tremendous opportunity when you can make something, whether it s a newspaper or a boat, or feeding a group of people.”

“This is the next big building block of our growth,” said Thomas. “An experienced fund development person will bring in $500,000 each year, and our budget is close to $800,000 a year. So without a fund development officer it falls onto the chief executive to bring in that money, in addition to running the organization.”

“Beyond Mark’s incredible qualifications, from talking with him I knew that his heart was there,” she said. “He understands the mission that we’re trying to do, the outreach, and being a positive force in the community. The position isn’t just about raising money, or for marketing and advertising. It’s more of a personal level and building relationships, which Mark is awesome at. A bonus is Mark’s journalism background, because we want to tell our stories and he is a gifted storyteller.”

“The problem isn’t always visible and in your face, but it’s not a hard story to tell,” said Paxton, pointing out that 26 percent of kids in San Benito County don’t have food security: a reliable, consistent source of nutritious food. He shares a recent story from Calaveras Elementary School, where teachers asked their students to complete the following prompt: “I wish my teacher knew . . .”

“The most runaway, consistent answer was ‘I’m hungry.’” said Paxton. “It’s heartbreaking, but it’s hopeful, because we are reaching people.”

Paxton not only believes in the food bank’s mission, but he’s excited about its growth – a new facility is expected to open by summer 2016 – and he’s inspired by a community that is “overwhelmingly” ready to help. On the morning he spoke with a visiting writer, the Church of Latter-Day Saints and others had stopped by to deliver donations, and a truck was preparing to depart with backpacks that the Food Bank had donated to the United Way for its “Stuff the Bus” event.  In return, Paxton explained, the United Way chapter was donating waterproof bags that the food bank could use for its food delivery program.

If that wasn’t enough, he and CEO Thomas were bound for a local meeting of the Order of the Eastern Star, which was donating thousands of pounds of beans to the food bank.

“Mark and I have a similar philosophy,” added Thomas. “If we are out helping the community and being a positive force, then the money will come . . . the resources will come, and the volunteers will come.  Because they see what we’re doing and they’ll want to be a part of it, rather than us asking.”

“There are too many amazing things happening here to be strictly coincidental,” Paxton noted with a smile. “When people volunteer here, they’re lifted up when they leave.”

– Editor's note: Mark Paxton is a member of the BenitoLink Advisory Board.