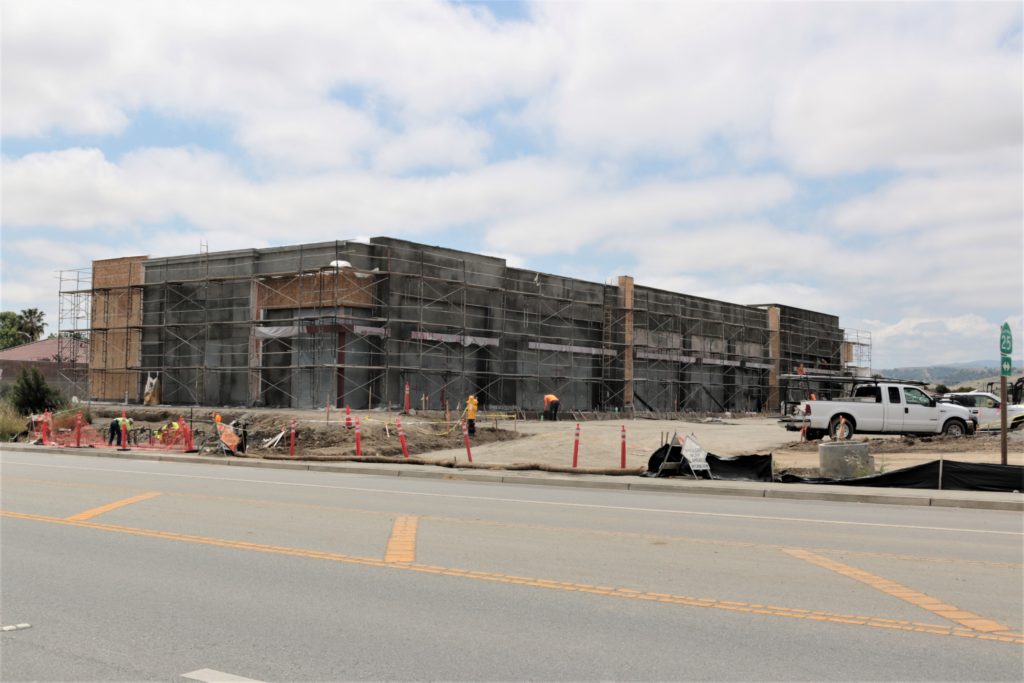 Paul Stephens, senior development partner at Hawkins Companies, said the buildings will continue to go up, but the parking lot can't be completed until PG&E finishes with electrical and gas installation. Even the gas and electric installs are being delayed up to five months, city water hookups are near completion. Photo by John Chadwell.
×

There are several businesses set to open in the Hollister Farms shopping center, but recent woes with PG&E are causing a delay. That’s according to Paul Stephens, senior development partner at Idaho-based Hawkins Companies that is handling construction.

“We’re probably five months delayed just because of power and gas,” Stephens said, “We intended to have the first buildings completed by June 1. It will be more likely this fall.”

Matt Nauman with the PG&E marketing and communications department said the company continues to work with Hawkins Companies on the project and confirmed there have been delays.

“We did have some delays on our end due to a backlog of work as we focus on wildfire safety efforts, and there also was an issue with the customer’s application,” Nauman said. “The good news is that progress is being made. The electric design is currently being finalized so we expect to have a final drawing by the end of this week. As for the gas portion of the job, design is scheduled to be completed by the end of June.”

Stephens said the building now under construction between East Park Street and Tres Pinos Road (where the Les Schwab Tire Center is located) is a 12,000-square-foot structure that will house Aspen Dental, Smashburger, Great Clips, Hokulia Shave Ice, and Jax Insurance. He said a 2,100-square-foot space is still available and four possible tenants have expressed interest.

“With construction delays, instead of having all these retailers open by September or October, we’re looking with our work being done this fall and opening after the first of the year,” Stephens said. “We’re doing all the work we can do, but the stopping point is we can’t finish the parking lots until power and gas are in.”

Stephens said as work progresses, Panera Bread is slated to occupy the corner of East Park Street and the State Route 25 bypass. Next to that are plans for a carwash, as well as a Denny’s.

Construction will begin on another 5,500-square-foot building in the shopping center no later than the end of summer, Stephens said. The only tenant he could confirm was Chipotle for half of the building. A lease is being signed for the other half, but he couldn’t reveal the name of the company. Though he did not confirm that the rumored Petco would be built, he did say it is still under consideration. He did confirm that T.J. Maxx has signed a lease in the shopping center.

He also said there will be a dialysis company, though he could not say which one.