Through May 13, "Archeology on the Edge of Empire" includes 18 photos capturing the contributions that California State University, Monterey Bay’s students have made to Mission San Juan Bautista during the past 20 years. 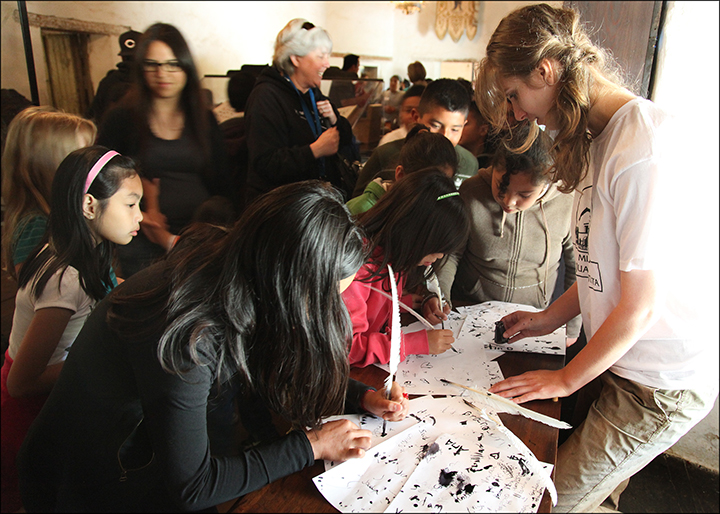 While an undergraduate student at California State University, Monterey Bay (CSUMB), Jennifer Lucido traveled to Mission San Juan Bautista on Friday mornings during the spring semester to attend her “Mission Archeology” course. On occasion, she engaged in traditional archeology, excavating with a trowel and filling buckets with dirt. But more often than not, Lucido spent her days practicing public archeology, interacting with bus loads of fourth-graders visiting the mission complex.

A photo exhibit now on display at  CSUMB’s Student Center is honoring those, like Lucido, who participated in the university’s “Mission Archeology” program over the last twenty years.

Running through May 13, the exhibition, “Archeology on the Edge of Empire." pays “special tribute” to students “who have worked and sacrificed to contribute to more than two decades of scientific discovery on the Monterey Bay," according to a press release.

In an interview with BenitoLink, Mendoza explained that when he arrived at the university in 1994 he was tasked with developing an archeology program that targeted students, who because of such limiting factors as socio-economic status, were unable to attend summer field-study programs—the often expensive excursions to faraway places that provide aspiring archeologists with hands-on training and experience.

“Archeology of the underrepresented,” Mendoza said of his course and the student population it served.

Missions Carmel, Soledad, and San Juan Bautista became the three sites synonymous with “Mission Archeology,” a course “that places students on the front lines and in archaeological investigation in Mission era sites of the California Central Coast,” according to the program’s description.

On their own dime, students traveled to the week’s chosen location, usually arriving before sunrise and leaving after sunset.

At Mission San Juan Bautista, Lucido and her classmates assisted their instructor with archeological digs, restoration projects, and preservation efforts. At the 33rd Annual California Missions Conference held in San Juan last February, Mendoza was the recipient of the Norman Neuerburg Award for his scholarship and work at the mission.

“The mission provided students with the most authentic experience they could have. And students loved going to San Juan,” Dr. Mendoza said.

Discovering the 1802 mission granary, the installation of the Native Traditions Room exhibit, and Lucido’s inadvertent excavation of the remains of early wooden crosses erected near the mission church’s entrance are among the contributions made by Dr. Mendoza and his students at Mission San Juan Bautista.

So, too are the connections made with the thousands of 4th graders who toured the mission while “Mission Archeology” was in session.

One of the exhibition’s photos shows Lucido surrounded by students learning how to write with a quill— the writing implement used by California missionaries.

Accustomed to texting or swiping on their smartphones, the eight and nine-year olds struggled with their penmanship, she explained in an interview with BenitoLink.

Facilitating the activity, the undergraduate hoped that her interaction with tomorrow’s stewards would spark an interest in California’s past in order to preserve its future.

The name chosen for the photo exhibition, “Archeology on the Edge of Empire,” reflects California’s unique place within Spain’s colonial dominion.

“California was on the margins of Spain’s empire,” Mendoza said. He added that it was “multicultural” and “something very different” than what one encountered in Spain’s other colonies.

Lucido’s published work, “Heroes in These New Lands,” examines the genealogical records of soldiers stationed at the Presidio of Monterey during Spain’s colonial period.

In Monterey, soldiers of African, Spanish, and Native-American descent served alongside each other.

When asked why he felt now was time for the exhibit, Mendoza explained that his “work in the missions is coming to an end,” as his interests are leading him elsewhere.

Recent California state legislation has played a role, too.

Effective last July, AB 52 requires the presence of a Native American monitor when archeological work is being conducted at a site. Hiring a monitor can costs hundreds of dollars a day. “Only schools with resources” can adhere to the policy, Mendoza said. “And the CSU’s don’t have the resources,” he added.

As the days close in on “Mission Archeology,” Mendoza realizes that the contributions made by he and his students will live on.

For those who have the opportunity to view the photo exhibit, he hopes that they see how instrumental his students were to the program’s achievements.

“It’s because of the students. They’ve always been there…they are central to the success,” Mendoza said.

Lucido explained that from an early age she wanted to be an archeologist but added that her elementary and middle school years at Carmel Mission’s Junipero Serra School had given her the false impression that she knew everything there was to know about California’s mission system.

Guided and inspired by Mendoza, Lucido began to realize how much she didn’t know.

At 6 p.m. on Monday, May 2 at the CSUMB Student Center, Mendoza will lead a one-hour panel discussion on the work that inspired the exhibit. Joining him will be three of his former students, including Lucido, who he now counts as colleagues in the field.

For Mendoza, their participation in the discussion speaks volumes about the “archeology course of the underrepresented” that he founded 20 years ago.

A tour of “Archeology on the Edge of Empire” will follow the panel discussion. The entire exhibit, from the photos selected for display to its promotion, is the work of current “Mission Archeology” students.

Putting the exhibit in Building 12 was important to Mendoza. “It conveys to all students that opportunities exist despite the naysayers,’’ he said.

For more information on the "Archeology on the Empire" photo exhibit contact the California State University, Monterey Bay Student Center, at 831-582-3329, or visit the center's website.

The CSUMB student center is located at:

Its hours of operation are: