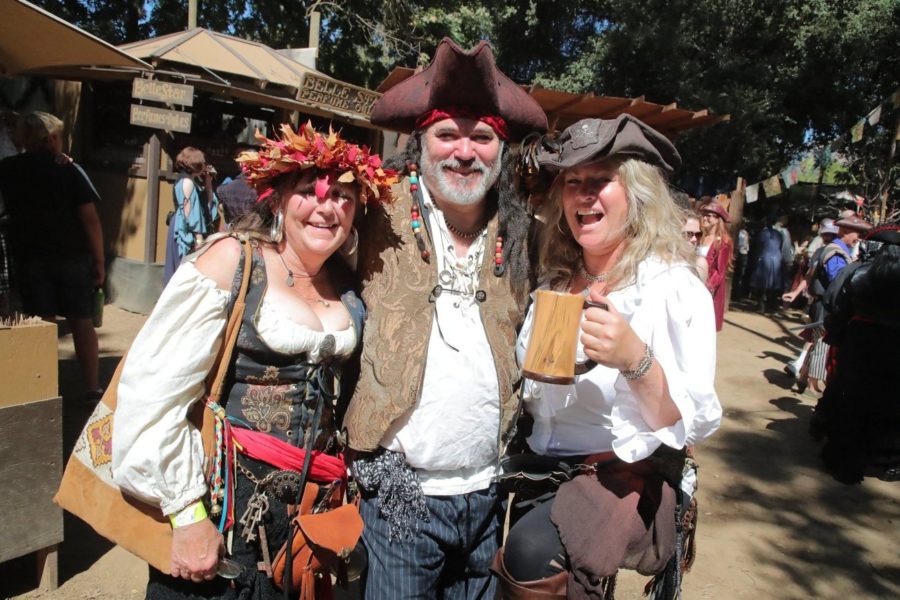 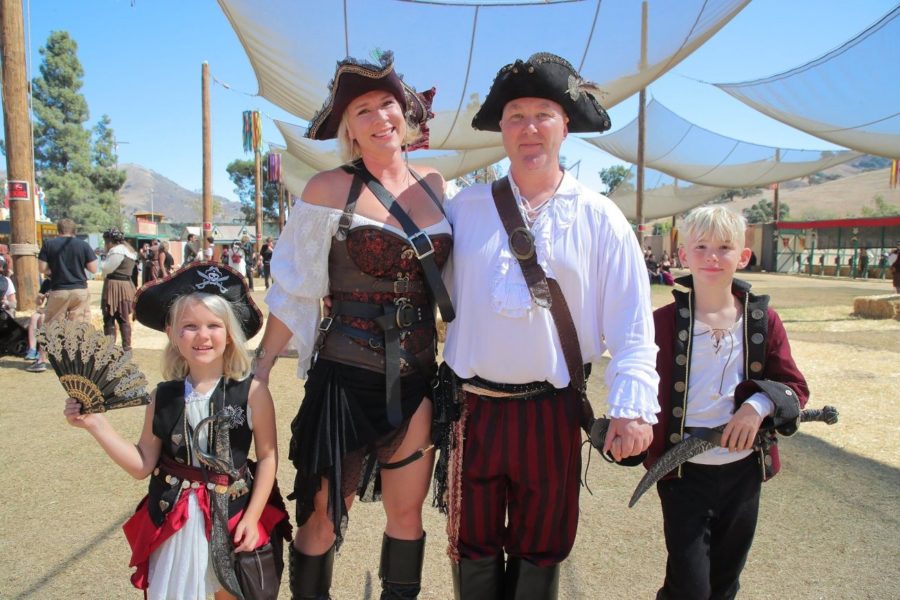 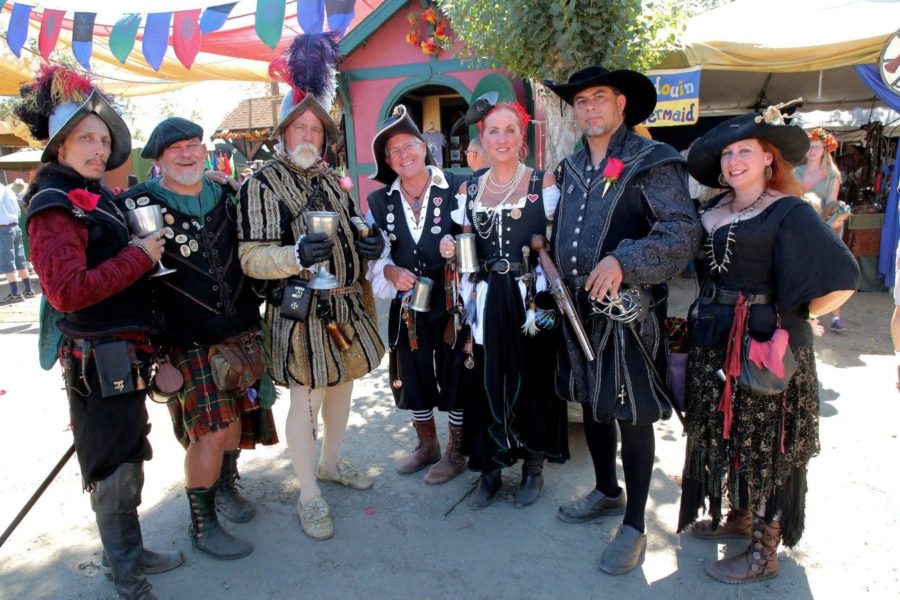 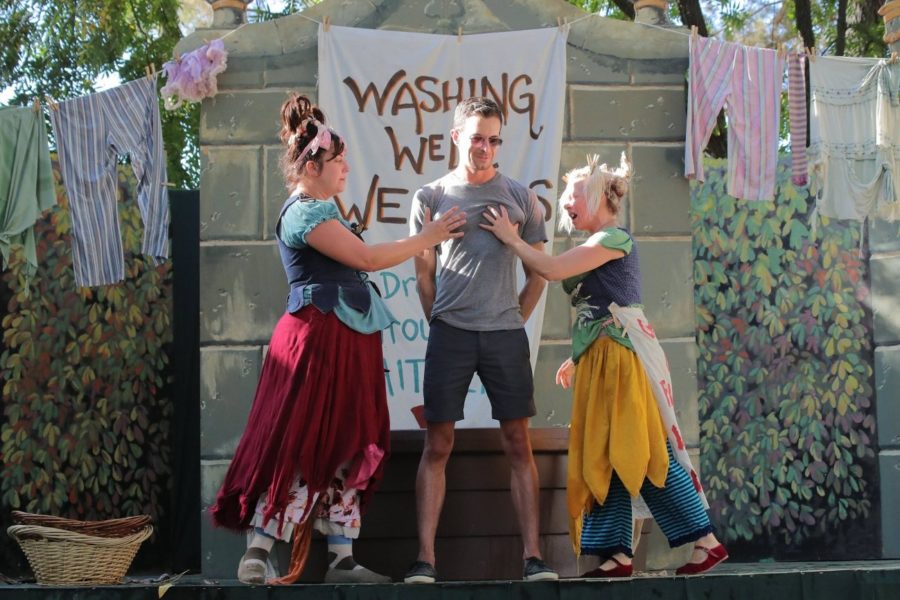 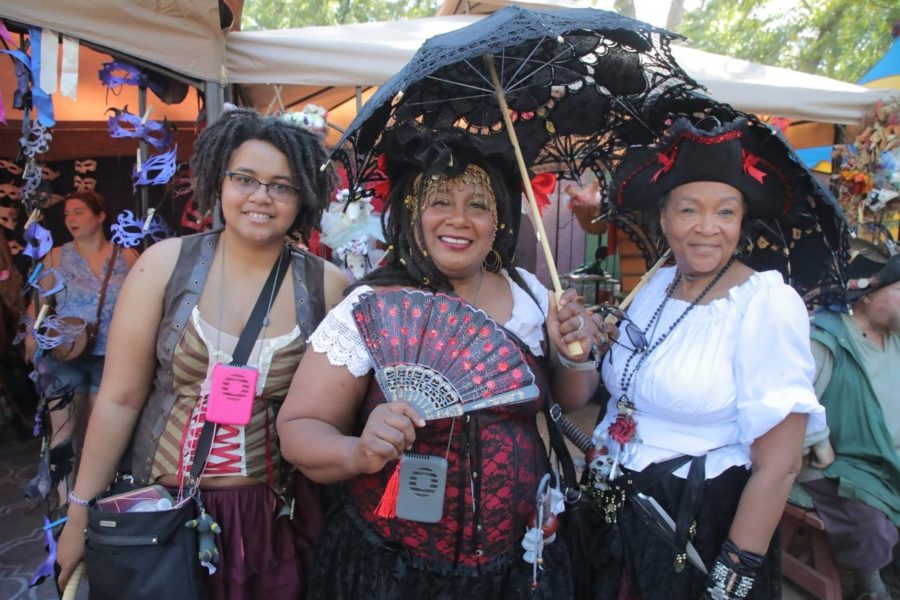 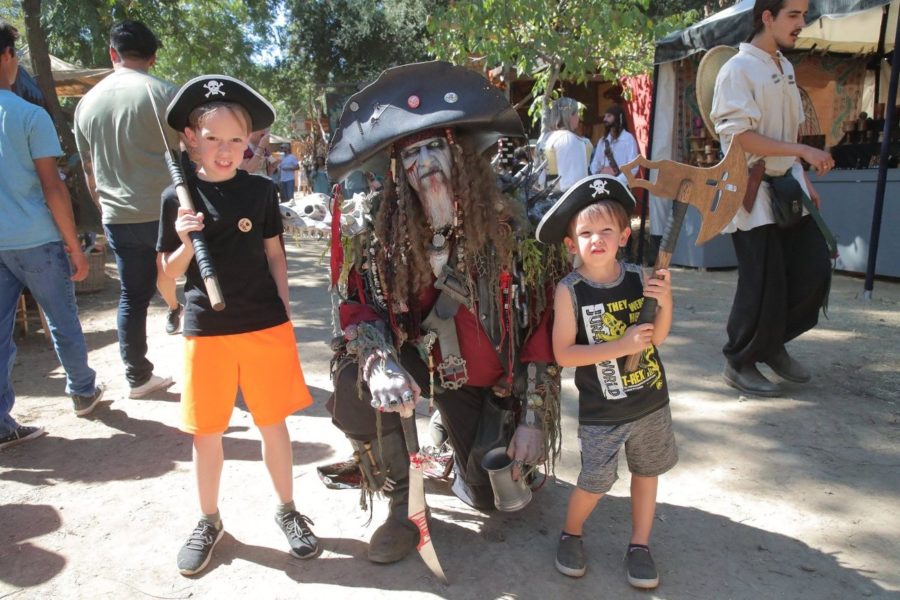 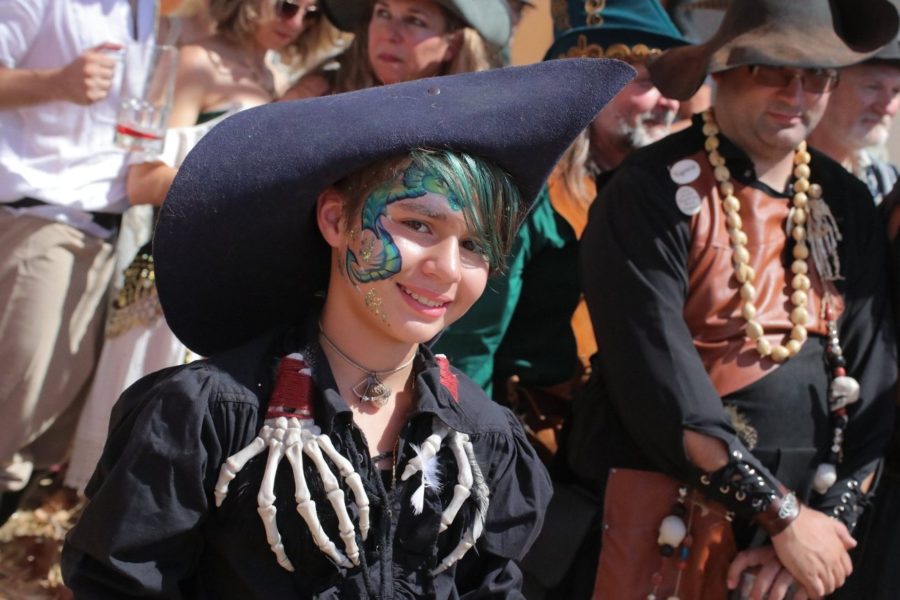 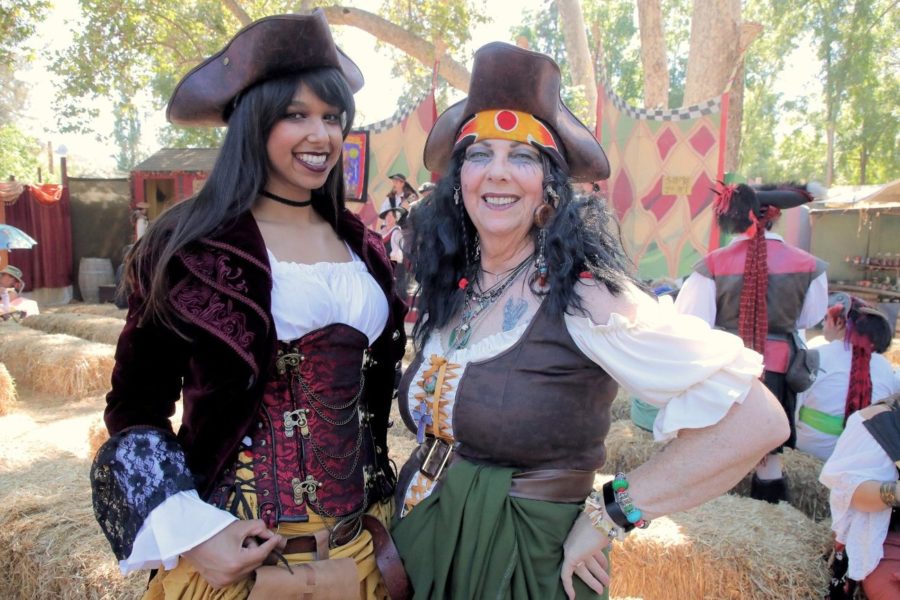 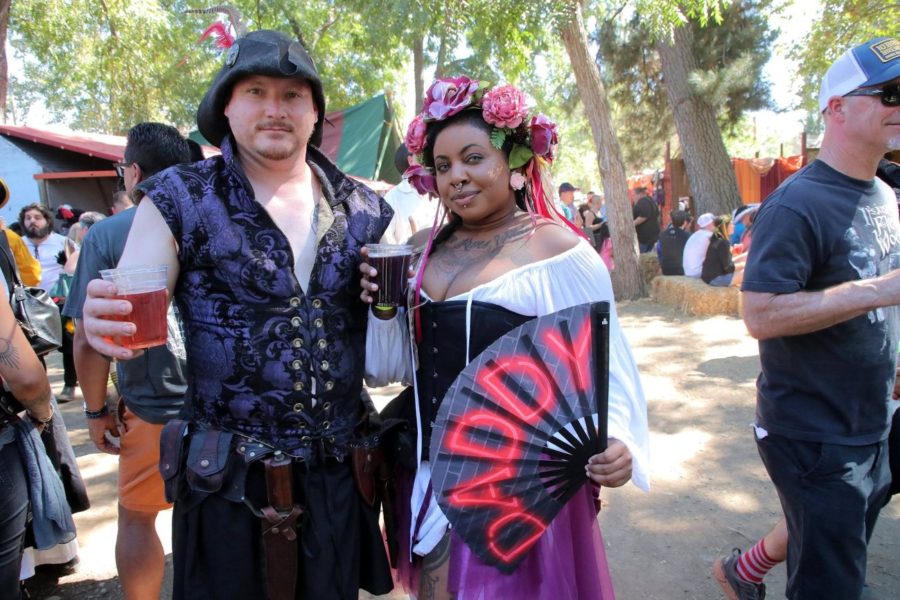 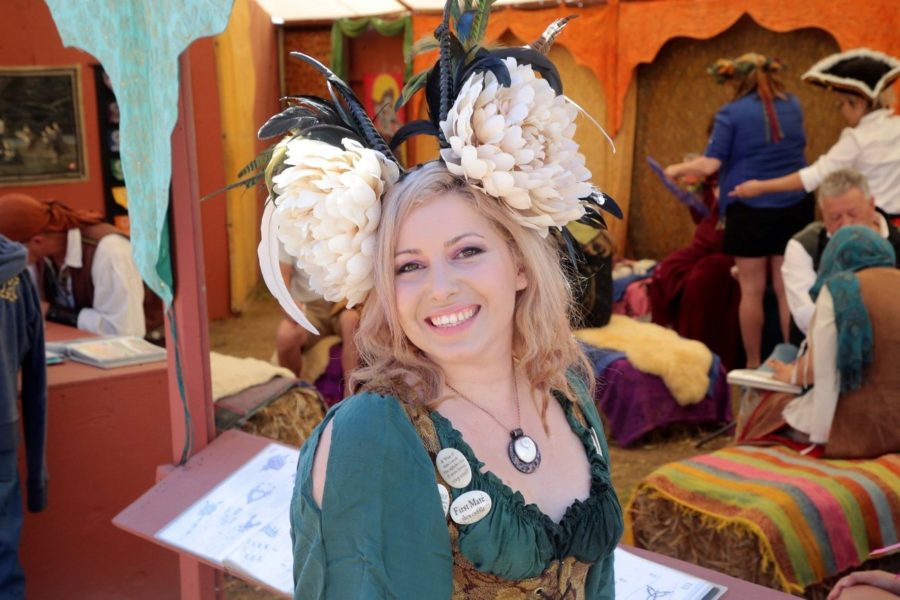 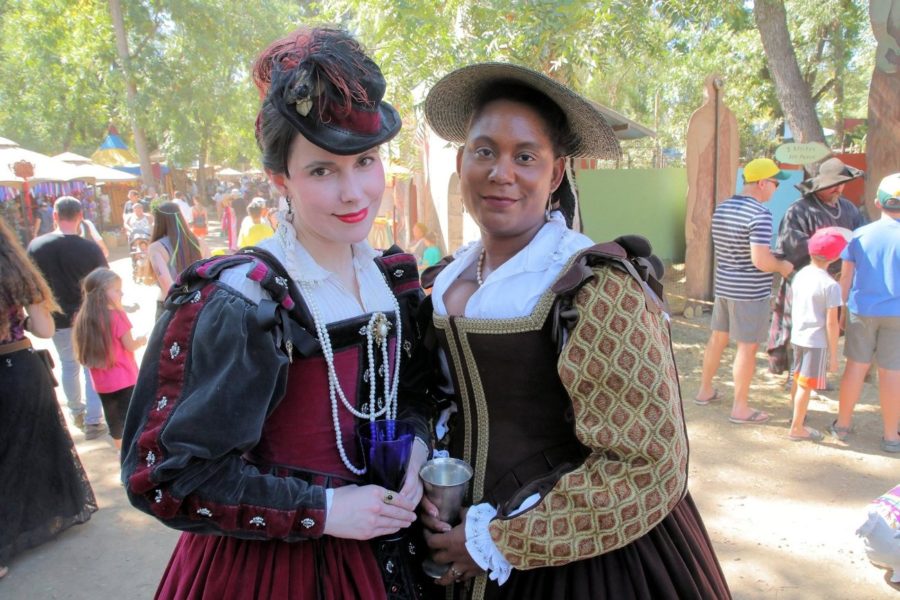 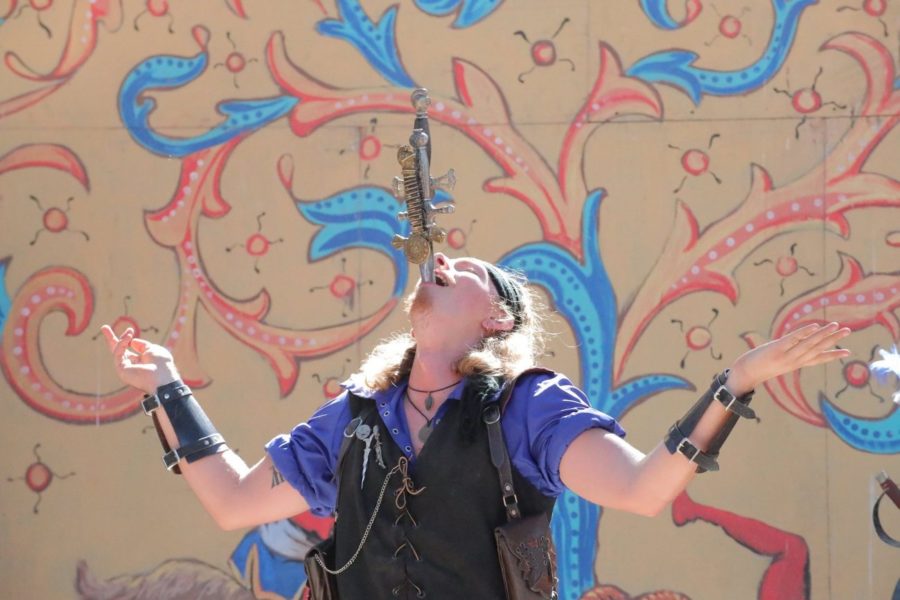 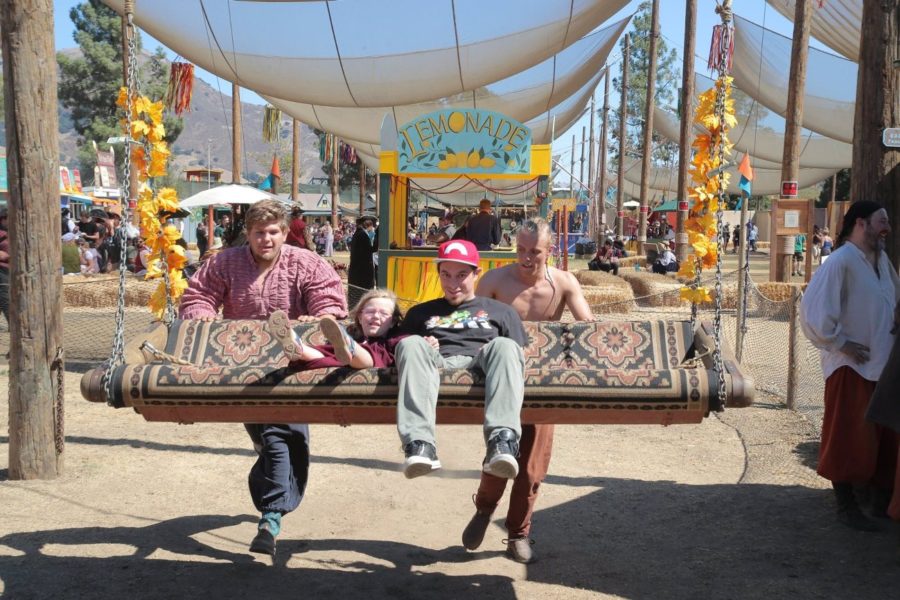 The Zertuche family with Anker Courtright and Darryn Penry 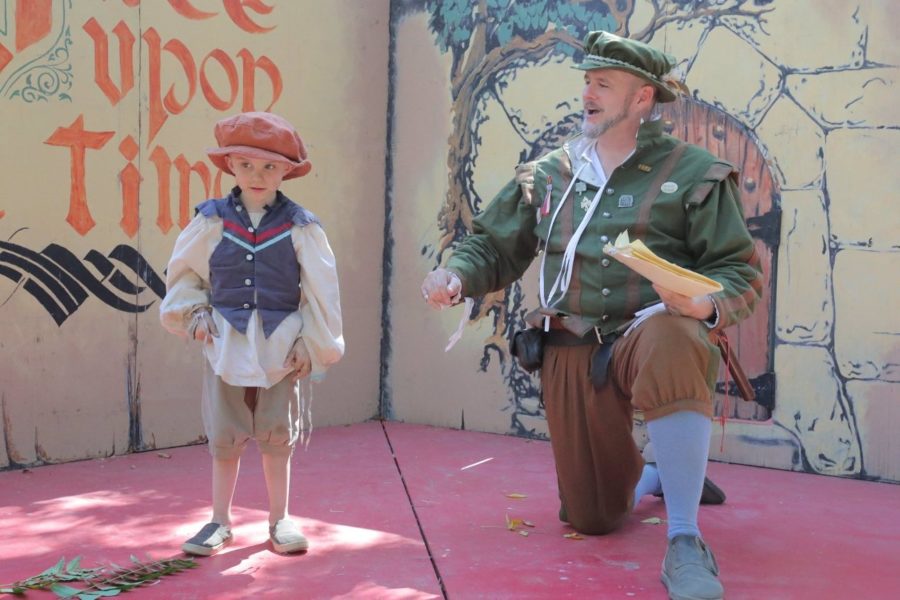 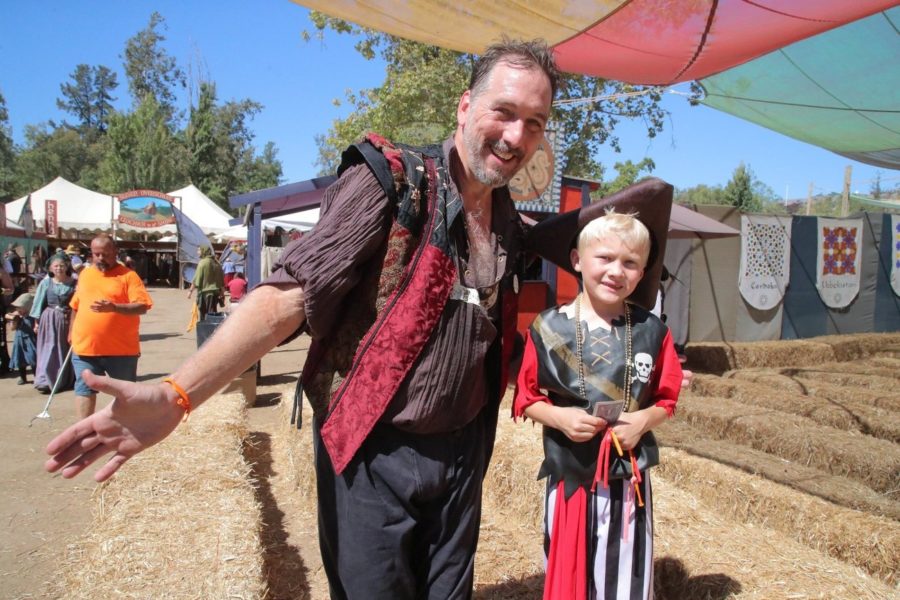 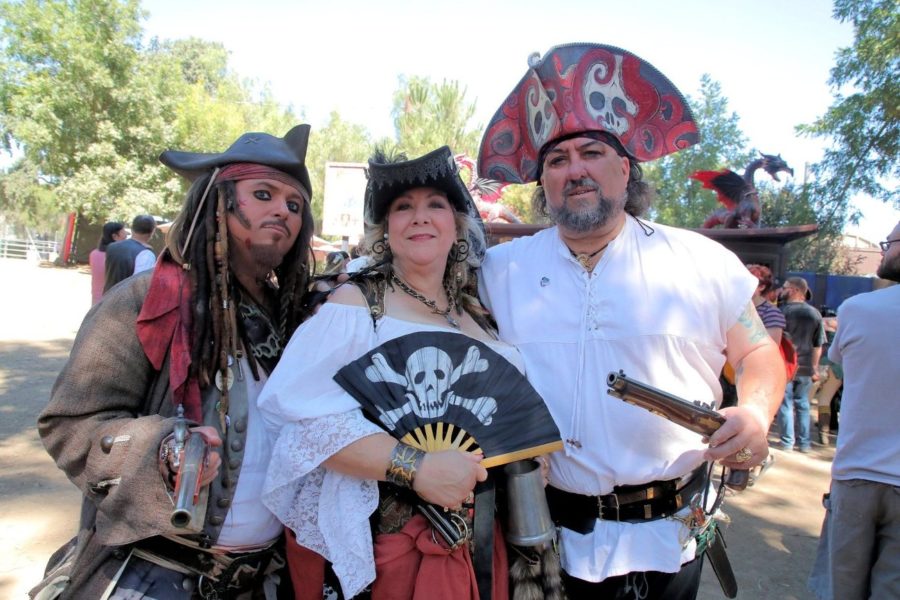 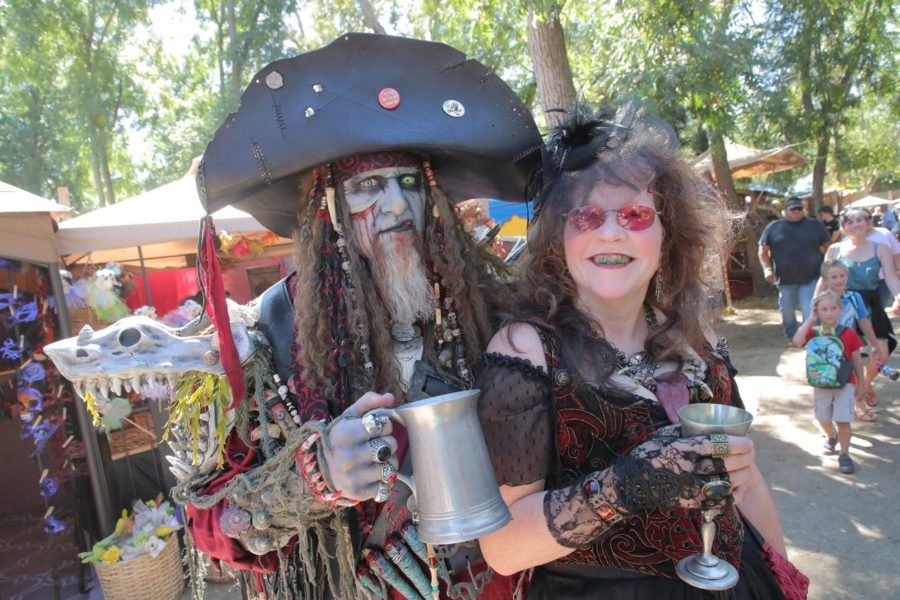 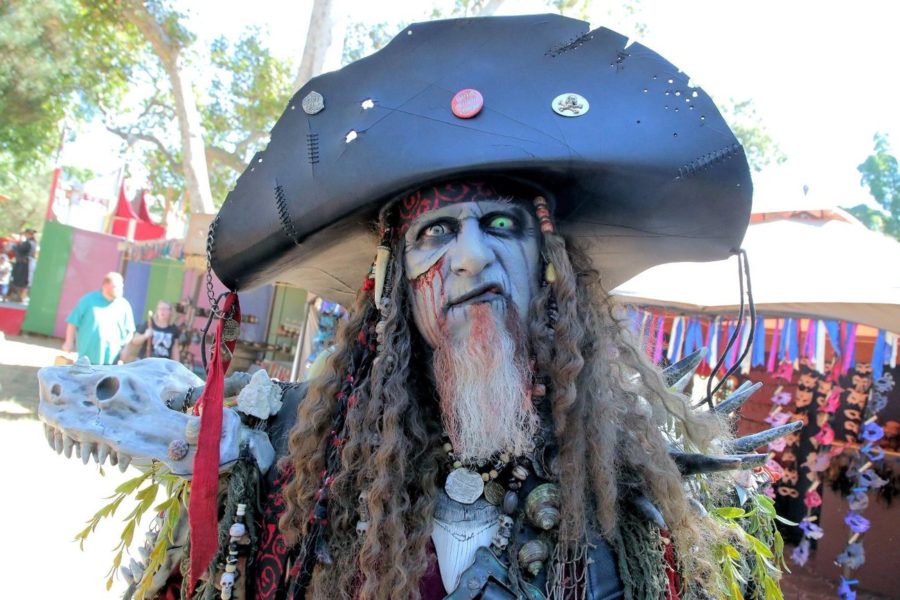 Sword-carrying swashbucklers and eye-patched buccaneers descended on Casa de Fruta for the Pirate Invasion at the Northern California Renaissance Faire. It was one of six themed weekends, with “Oktoberfest,” “Masquerade,” and “Halloween Fantasy” weekends still to come.

Visitors were encouraged to dress up as their favorite pillaging privateer to join the fun in the Faire village of Willington.

There are over 70 performances every day at the Renaissance Faire, not including the processions, traveling actors and musicians, jesters, horse shows, jousts, and special events like the Queen’s Royal Reception. New performers include Cydeshow Cy, The Merry Wives of Windsor Condensed, Commedia Per Tutti, Shakespeare the Pirate, Dr. Faustus and his Potent Potion, and Jesse Linder, Bard.

Maureen Drew has been organizing the Renaissance Faire for almost 20 years, finding and booking the performers. This year, she was able to add seven new acts and bring back some that participated long before she was involved.

The biggest challenge is the time commitment. Performers need to be in the region for the duration of the faire, which this year expanded to six weeks. Drew said it can be difficult to lure some of the East Coast acts out to Hollister, and many of the performers come from Southern California. However, our Renaissance Faire’s reputation as the premiere event on the faire circuit makes it extra attractive.

One longtime performer is Brian Howard, known at the Faire as “Broon.” He performs four shows a day at the Romany Camp Stage and one at the end of the day at the Amethyst Arbor stage. With a mix of juggling, magic, and fire eating, he honed his craft as a street performer, and like most of the acts involves the audience whenever he can.

“Street performing is a wonderful education as a performer,” Broon said, “and every performer I know who started in it is better for doing that.”

Though the faire is closer to a theater act than a street performance, performers still have to draw people in from the crowd.

“You have to make people forget that they might be hot or tired or thirsty and say ‘please sit with me for 45 minutes and I’ll make you happy,’” Broon said.

And Broon certainly delivers on that. His act is a combination of refined structure and improvisation. His spontaneous wit is front and center when he brings children onstage for everything from card tricks to juggling bowling balls. He also features fire eating.

“I tried stilts, I tried juggling, I tried unicycles, but fire eating stuck with me,” he said. “I tried it and I liked it. But with me, it’s not about the tricks, it’s about the laughter. I try to make the tricks support the jokes.”

One act Drew booked for the first time this year is Cyrus Pynn, who performs as Cydeshow Cy. Cy describes himself as a “sword swallower, stuntman, and professional lunatic.” The core of his performance is indeed swallowing real swords, no tricks involved. Over the course of his act he performs variations on the skill, swallowing three swords at once, twisting his body to accommodate a curved sword, and swallowing a Kris blade, which allows the audience to see the ripples of the sword moving the sides of his throat as it goes down. His act is popular, and he is booked solid through the end of the year at festivals, fairs, and his own one-man show, “Down the Hatch: Tale of a Sword Swallower.” At this year’s faire he’s doing three shows a day at the Coughing Sheep stage.

Cy said he began his career studying theater at Virginia Tech. He moved to street performing for a very simple reason: “I’m not a very good actor.”

“I pushed my circus side which involved juggling and everybody loved the dangerous juggling,” he continued. “This led to the sideshow performances, and sword swallowing is the holy grail of sideshow arts.”

Sword swallowing involves a lot of practice just to manage it the first time.

“It took about a month and a half to get my first sword down,” Cy said. “For some people it takes months or years to master it. For me it was rather quick, which is why I made a career out of it.”

The climax of Cy’s act varies from performance to performance. In one, he ended by balancing a sword on top of a sword he swallowed. In another, an audience member was invited on stage to pull the sword out of his throat. “Pull only,” he warned, “no pushing!”

As with other performers, the faire at Casa de Fruta stands out from the others for Cy.

“I love this faire,” he said. “It’s the best faire I have ever done. I love the layout, the stage setup, they treat me very well. I enjoy the location, all the trees. It’s like coming  home. I hope they have me back next year.”

A perennial favorite is the Washing Well Wenches, who spin their act off of doing laundry and housework at a large area near the entrance. They are part of a troupe that performs all over the country.

Two of its members, Kristen Lynn and Mandy Williams, also perform “The Dirty Laundry Show” three times a day at the Amethyst Arbor stage. It’s heavily participatory, with the two women portraying bawdy washerwomen in search of love. They move around the audience engaging potentially eligible males, young and old, and are not above bringing men on stage to compete for their affections. Picking men to join in is an art in itself.

“We look for people who have a quality we call ‘The Sparkle,’” Lynn said. “There is a sparkle behind their eyes and they are ready to play. Some girls say ‘get my husband and embarrass him,’ but that’s not what it is. We just want to pull out the sparkle and star and sunshine in that person and give them their time to shine.”

Lynn has performed at the Renaissance Faires for 11 years. While there is never time to watch the other acts, the performers are like family to her.

“When we are not onstage we are out there hustling, trying to pull in a crowd,” she said. “But you hear the musicians and they are amazing and people like Broon are A-list comedians. It is a great place to come and let it soak in.”

Lynn and her band, Kristen Lynn & The Foxgloves, have been featured on the PBS series “Musicology.” She has shows booked all this month. Still, her heart is here in Hollister.

“I love this Faire!” she said. “The audience is great, the community is great, and everyone is sweet. It’s pretty, the air is clean. It’s a beautiful, beautiful little area.”

The Northern California Renaissance Faire runs every weekend through Oct. 20 from 10 a.m. to 6 p.m. Tickets are available at the gate or online at https://www.norcalrenfaire.com/.