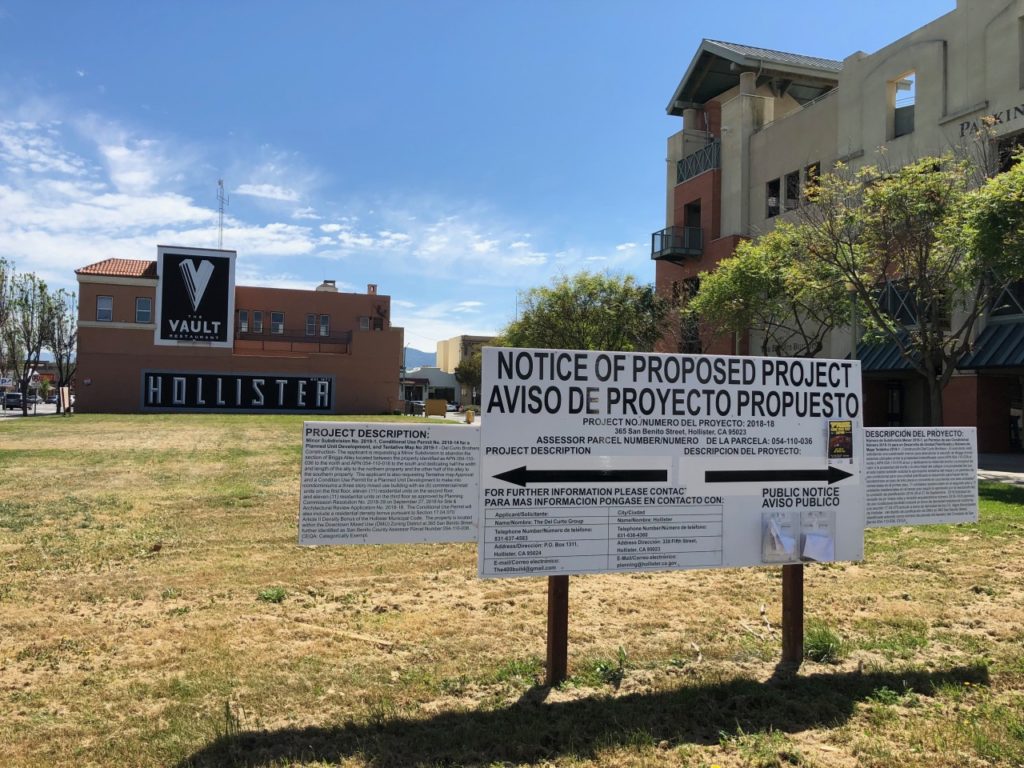 The 400 block of San Benito Street. Photo by John Chadwell. For the second time in a little over a month, Mayor Ignacio Velazquez on April 11 attempted to derail the Hollister Planning Commission’s vote on the tentative map and conditional use permit for the development of the 400 block at San Benito and Fourth Streets with a last-minute legal maneuver. This time, however, he failed, and the commission approved the measure in a 4-1 vote.

Commissioner Kevin Henderson recalled receiving a letter from Velazquez’s lawyer four hours before the meeting on Feb. 28. He said it may not have been a delay tactic, but was suspicious about the timing of the second letter, dated April 11, arriving by email just two hours before the meeting. When it was brought to the commission’s attention more than an hour and a half into the discussion, Commissioner David Huboi said it was the first time he heard about it.

While Velazquez, who owns the Vault building next to the 400 block and is also an owner of the building at 501 San Benito Street, has recused himself from City Council votes on the property, he has frequently spoken out against development on the grassy piece of land through social media. In 2017, he led a petition to rescind a City Council vote that approved development on the site. Though he collected enough signatures, California Attorney General Xavier Becerra issued an opinion that the council decision could not be put to a referendum vote.

Velazquez’s April 11 letter made the same claims as the first, citing density limits, the need for a California Environmental Quality Act review, and exempted development impact fees. A new claim accused city staff of keeping the public in the dark about the project and violating the Brown Act.

Velazquez met with BenitoLink on April 19 at his 501 San Benito Street office, where his American Electrical Services business and mayor’s office are located. He said that because he was out of town at the time, he told Marcus, who works for him, to request the papers.

“I could have done it, but I didn’t want anybody to feel that I’m pressuring anybody,” Velazquez said. “When the attorneys called me and said they needed me to get the information I asked him to go get it.”

Velazquez said that the problem is when the planning commissioners get the meeting packet, it is also supposed to be available to the public.

“There should be no lag time, because it puts the attorneys, in this case, at a disadvantage,” he said. “I don’t know if anybody was playing games, but whenever they release the documents for the commissioners they should have been online or we should have been able to go to City Hall and they should be there.”

Associate city planner Abraham Prado, who earlier in the April 11 meeting had rebutted each point made in Velazquez’s first letter, said he believed there was no violation of the Brown Act.

Taking the podium during the meeting, Velazquez repeated claims he has made over several years that the city ignored the public’s insistence on creating a park or plaza. He described the process as “playing a shell game to build condos” and accused other councilmembers of “making good deals for a few friends.”

“The residents of this community are fed up of this game being played, ‘let’s find a loophole,’” Velazquez said. “Let’s get input from the public. They should have been allowed to vote on this. If they had, you would have found a great majority of the people would have told you ‘No, we don’t want this, we want the plaza’ that was about to be approved in April 2014.”

This isn’t the first time Velazquez has had designs for the block. Velazquez told BenitoLink by email on April 14 that 19 years ago, when he was president of the the San Benito Center of the Arts, he borrowed $20,000 from the city to conduct a feasibility study to determine if the public would support a center for the arts. While Velazquez paid back the loan, City Manager Bill Avera told BenitoLink that the study determined the community was too small to support a facility of the size Velazquez was proposing.

At the meeting, Mary Paxton, program manager in the city’s development services department, explained the history of the 400 block following the 1989 Loma Prieta earthquake. She said the state Resource Development Agency (RDA) determined that the city must dispose of the property, and that commercial, mixed-use was the preferred choice to revitalize downtown. After Velazquez insisted the city could have purchased the lot and turned it into a plaza, and that the 2014 City Council moved in that direction when “something happened,” Paxton came back to explain further.

In 2014 the California Department of Finance approved the city’s long-range property management plan to develop the 400 block, she said. The city looked to purchase the property from the RDA that had acquired it after the earthquake. She explained that staff had asked the council at the time if money from the sale of the property where Walgreens is now located could be used to purchase the block. The council agreed and because it would take about 18 months to finalize, the city thought of using the grassy plot as a plaza in the interim. She said the land was always intended to be used for a “catalyst” project.

The April 11 letter marks the second time in three months that mayor Velazquez insinuated in a public forum that a city employee was in cahoots with developers. The first instance involved Maria Mendez, the city’s cannabis affairs manager, when he questioned her relationship with cannabis operators applying for dispensary licenses. This time, his target was Paxton, whose comments from the podium he dismissed.

“If we’re going to tell stories, make sure it’s factual,” he said. “The previous conversation was highly inappropriate and very misleading. What you heard was one person’s version of what happened. This conversation you heard should never have happened.”

“Going after Mary personally wasn’t smart,” City Manager Avera told BenitoLink on April 15. “She worked with planning consultants, then the county for several years prior to coming to us. She’s been with us about 15 years.”

Avera said Paxton is one of the most dedicated, hard-working people he has ever met.

“Mary is the best writer on staff, so we utilize those skills all the time,” he said.

Even though Commissioner Roxanne Stephens was skeptical of the calculations to determine that there could be 22 condos, Commissioner Seth Muenzer made three separate motions to approve various aspects of the agenda item. Henderson seconded each and the commissioners voted to pass it 4-1, with Stephens the lone “no” vote.