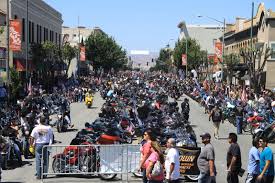 Reflecting on the recently-completed Hollister Motorcyle Rally over the July 4th weekend, Police Chief David Westrick said that despite a shooting incident at a Chevron gas station on the event's last day, "the event itself went pretty good."

Acknowledging that he can't set the shooting aside when doing a recap of the event, the chief said the city's newly-installed security cameras downtown "worked better than we had planned" and a doubling of the city's patrol units allowed them to respond to the approximately 430 calls for service during the holiday weekend, when thousands of bikers rolled into San Benito County for the annual event.

"We've got a few things we need to do to make the event a little safer, but I'll leave the decision on stuff like that to the city council; they're the elected body," Westrick said. "If (the topic) comes around, we'll have a discussion and I'll let them know what my thoughts are. We'll all examine what we thought was great and what didn't work so well. We do this every year."

With staff manning the downtown security cameras, they became "an early-warning system" for law enforcement, he noted. "It worked out for that perfectly. It worked so well, we have a backlog of incidents we still need to work on deeper — nothing of major consequence but things that occurred that we wouldn't have seen had we not had the cameras."

For 2013's event, Hollister Police borrowed surveillance cameras from the federal government. "There were fewer of them and they weren't as sophisticated."

Westrick said that wayfinding was an issue, with many bikers and other event-goers frequently asking for directions. "While we were out providing protection for the public, many folks just wanted to know where stuff was. The Downtown Association is going to work on that, but thousands of people thanked me and the officers for being out there and providing the service we did."

The six "rolling medics," which were emergency medical staff on bicycles in the downtown rally area, had a dozen or so incidents to which they responded, "The most severe was a heart attack they were able to take care of and transport to a hospital quickly," Westrick said. "I was really glad we did that."

While he had no estimate on the size of the crowd on Saturday, July 5, Westrick said it was "enormous."

"Folks that came saw we had a few officers on enduro bikes to give us a better vision of the rally," he said. "They saw there were folks from the Department of Corrections who are smart and good communicators. I'd like to have them come back every year. Santa Clara deputies were here as well, along with other agencies.

The barricade system was also effective, the chief said, as it provided alleyways pedestrians to cross streets safely with the help of crossing guards.

Police, fire and code enforcement staff stepped up illegal fireworks efforts "10 notches" by creating a "fireworks enforcement team" that wrote nearly 20 tickets under the city's new ordinance that calls for $1,000 fines for the use of fireworks not of the "safe and sane" variety. On July 3 and 4, Westrick said he had no available police units to drive fire marshals around the city to cite people using illegal fireworks, so they ended up going out in marked an unmarked vehicles to write citations when they found violations.

A smartphone app, MyPD, included a fireworks reporting tab that Westrick said "a lot of people used to report specific violations. I couldn't even tell you how many people reported; there were a ton of them. People were fed up. Those app reports went straight to code enforcement and the fireworks enfocement team."

While many things went well in Westrick's estimation, he called Sunday's triple shooting at the Chevron station on San Felipe Road "a horrific event; very dangerous."

"We're still doing an investigation now," he said. "We want to see what lessons we can learn from this event and how we can apply them to future events," he said.